'He was a sitting duck' - 38 people died at a Covington nursing home - Why?

This is Part 1 of Standard of Care, a Katie Moore Investigation into how COVID-19 spread through Louisiana nursing homes and what could have been done to stop it. 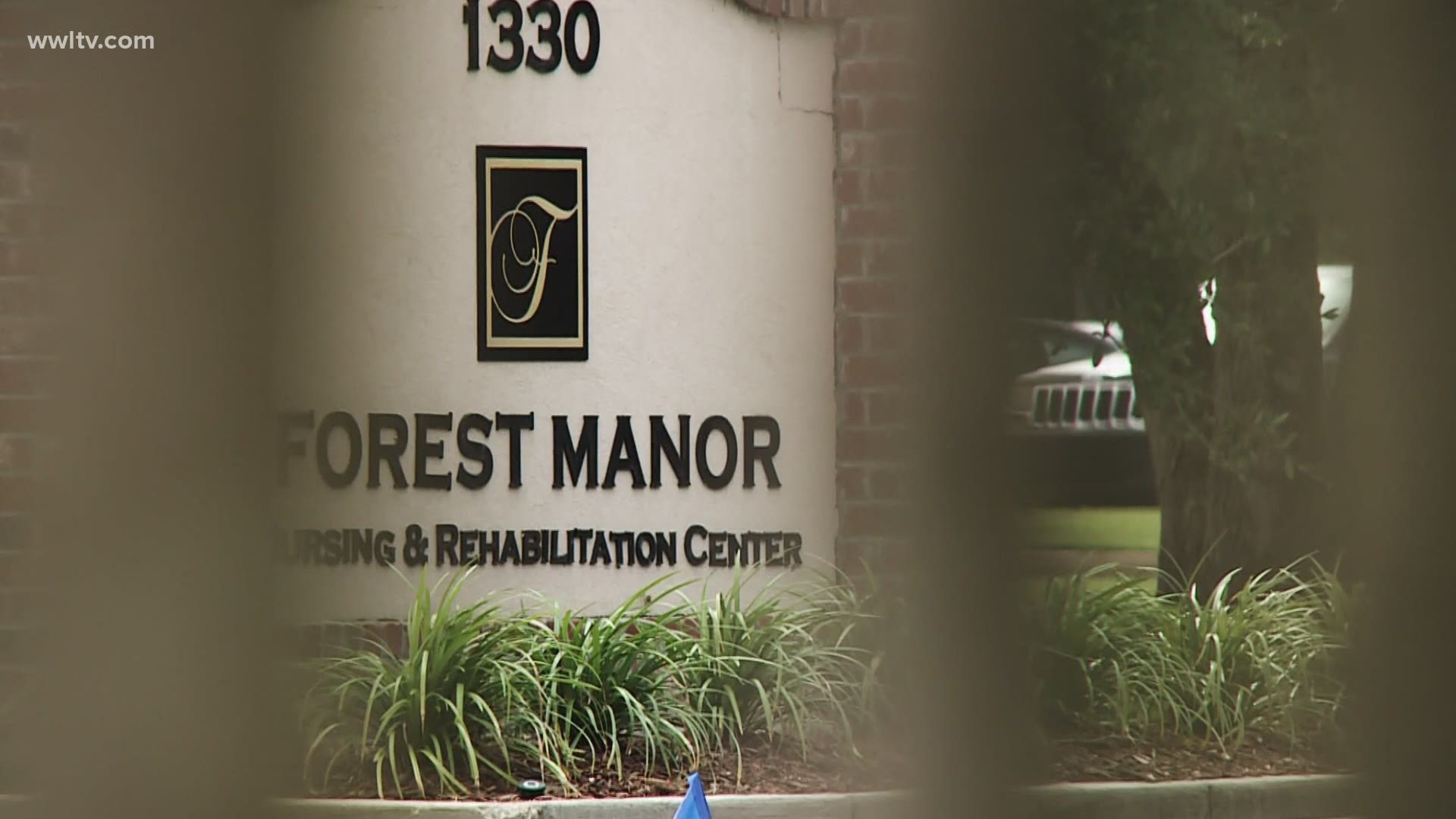 COVINGTON, La. — When COVID-19 made its first appearance in a Louisiana nursing home in March, it took little time for the number of nursing homes with an outbreak to multiply. In just two weeks, the state went from one nursing home with two or more cases to 40.

Inside those homes, where the state’s most vulnerable live in close quarters, the battle with the invisible enemy ramped up faster in some nursing homes than others.

By May, Forest Manor Nursing & Rehabilitation in Covington had topped the list reporting the greatest number of COVID-19 deaths in the state

“Washington was hit so hard,” said Mary Grayson as she reflected on the timeline of how she and her sister waited and watched for signs of an outbreak at Forest Manor. Their father, Thomas Zanco, was a resident.

Grayson and her sister, Christina Pepiton, say they got their first hint Forest Manor had a problem by looking at the facility’s Facebook page.

“Some of the residents, their family members had posted that they had died. I was like what? Forest Manor should have told me something,” Pepiton said.

The official word from Administrator Clay Pere that they were battling an unknown number of COVID-19 cases wouldn’t come until April 28 in an email. Until then, they say Pere had only written to them in late March that one resident had tested positive, but they were in the hospital, not Forest Manor.

Thomas Zanco loved to cook. His daughters said stuffing was his favorite.
“He put everything in it. He pours shrimp, oysters, artichokes, everything, you just kind of put everything but the kitchen sink.

He was a butcher, a restaurant owner and ended his working years in the construction business. The diabetes, Parkinson's disease and two strokes ravaged his body, leading his daughters to put him in Forest Manor in 2013.

“It's been a battle. It's been a battle to keep him safe and healthy,” Pepiton said.
In a sadistic irony, in his final years, a simple meal could prove fatal for the one-time chef. Zanco was what's called a silent aspirator. If he wasn't positioned properly when he ate, the food could sink into his lungs, giving him pneumonia.

“Every single time the doctor would say, you know, I really just don't think he's gonna make it next time, you know, he really got through this by the skin of his teeth,” Pepiton said.

They put cameras in his room to keep an eye on him.

The first resident died of COVID-19 at Forest Manor on April 5, according to data from the St Tammany Parish Coroner. Like a silent tidal wave, COVID-19 washed over the nursing home with deadly force. Over the next two months, the infection killed mothers, fathers, grandmothers, grandfathers, brothers and sisters, 38 people so far.

“I think early on that, you know, the nursing homes weren't really prepared for such an aggressive pandemic,” Coroner Dr. Charles Preston said in an interview in June. At that time, nursing home residents accounted for more than half of St Tammany’s COVID-19 deaths. He noted how vulnerable the population is to begin with.

In late March and early April, Zanco's daughters started snapping pictures of staffers in their dad's room with no masks on. They said they brought it to the attention of a staff social worker.

Forest Manor had been declared a coronavirus cluster by the Louisiana Department of Health on March 31, meaning two or more confirmed cases there, and days later, staffers were moving Zanco without basic surgical masks on.

While the general public wasn't masking up at that point, health care workers were. Two other Forest Manor families we spoke with raised similar concerns.

“We would lose three or more people, and then it just, we lost count. Like they come in threes, but we can't even count. What are we up to like 18? 19,” a former Forest Manor nurse recalled. The nurse asked not to be identified.

In the early days, the nurse said administrators isolated COVID-positive patients in their rooms. Many of them happened to be in the group of rooms in the wing of the facility called the 500 hall.

“At the beginning, they didn't even put up a wall to say our COVID patients are going here. They basically started throwing everybody into 500 without moving the people who were not COVID positive. So now we're spreading it and potentially getting everybody sick,” the nurse said.

The nurse said testing was a big problem as it was for most American nursing homes. Only symptomatic residents were either taken to an urgent care clinic or the hospital to get tested, or they were never tested at all.

Patrick Youngblood, a long-time rose gardener at City Park lived on the 500 hall but was never tested for COVID. At times in those final days in late March when he started to decline, his sister, Liz Canik, said he had a low-grade fever, but that it wasn't unusual for his condition — complications from cancer treatment years before.

“When we were visiting outside of his window over that weekend, prior to his passing, his roommate was in the room, people were coming in. The nurses were coming in to check. They opened the window. I was able to visit with him and his roommate was there. And he was perfectly healthy. He was not wearing a mask either,” Canik said.

At the time, she was consumed with grief and concern about her brother’s declining health. He had beat brain cancer, but Canik said the radiation caused a slow decline. She said she felt the nursing home was taking precautions and that it didn’t strike her as odd that residents weren’t wearing masks.

“At that time, I was so focused on my brother that it didn't strike me as odd. But looking back, I would have thought that perhaps every patient should have been wearing a mask,” Canik said.

The Centers for Disease Control and Prevention and the Louisiana Department of Health didn't require testing of all residents and staff until months into the pandemic.

“By the time they did test at all the facilities, half of everybody already had it,” the nurse said.

Because of their cameras, Zenko's daughters knew the regular nurses and aides who took care of their dad and in March, strangers started replacing some of the regulars.

'I don't know who these people are'

“There's new faces in there. I don't know who these people are. Are you educating them or, you know, in fact, that the two CNA's that I saw without the masks, I had ever seen before. You know, oh, we're having to pull CNA's from other halls,” Pepiton said.

The nurse said they believe the staff was a source of spread.

“I wish that when it started that more precautions were taken. I wish that we were not allowing the staff to go back and forth hall to hall. That if you worked the COVID hall, you stayed down that hall. You did not come off of that hall,” the nurse said.

By April, Zanco was spending time out in the hall outside of his room.
“Somebody has to watch him because he has a tendency to choke on his food. Somebody has to be there in case he starts choking,” Pepiton said.

Before the pandemic, he would be taken to the dining hall. Then, aides started watching him eat in his room. But in March, Pepiton said they started wheeling him into the hall, possibly exposing him to coronavirus patients.

“They had so many COVID cases in his hall, now I'm finding out that him being in the hall, he was he was a sitting duck, Pepiton said.
The nurse remembered Zanco eating in the hall.

'We could have done so much more'

“We did have a few that had gotten COVID on that hall and we had about maybe half of those residents pass away who had gotten it on that hall,” the nurse said.
To fight the spread, Forest Manor added hand sanitizing stations, and according to the nurse, the staff did use gowns, masks and other personal protective equipment, or PPE when working with COVID patients.

The nurse said they had a good supply of PPE in the beginning, something echoed by the administrator in emails to the families. But they eventually ran out of gowns. The nurse said Forest Manor sewed arms onto hospital gowns for protection that the staff put on and off when entering and leaving the COVID hall.

But the aides would still congregate at the nurse’s station and on breaks, a cause for concern for the nurse.

“There could have been more that was done to protect these residents, to protect our dad. And it wasn't. And a lot of ways I find that it was negligent. It's sad and it's senseless,” Grayson said.

In May, experts urged states like Louisiana to send health officials into nursing homes early on to help with infection control.

“We could have done so much more,” the nurse said. The nurse was laid off when Forest Manor’s patient population dropped to its lowest levels in July.

Nationally-recognized nursing home expert and University of San Francisco Nursing Professor Charlene Harrington urged states, like Louisiana to more closely evaluate and monitor the nursing homes with outbreaks in May.

“The state should have put the state inspectors into these homes that have the virus and have them there all of the time during the day to make sure that they have enough staff, they have enough PPE and they're practicing safe practices. So, a lot of states have not done that,” Harrington said.

A spokesman for the Louisiana Department of Health said the agency worked with the CDC to do a virtual infection control assessment with Forest Manor on March 15, process that that was later used in other states.

LDH "strike teams" physically went into the home May 15, after waiting to enter until the critically short supply of PPE rebounded. That was after the virus had killed 32 residents at Forest Manor.

Health officials declined to be interviewed for this story. In a statement, the La. Department of Health said every COVID death is a tragedy and that, “Once the pandemic started, the Office of Public Health pursued an aggressive schedule of infection control support through the Infectious Disease Epidemiology program that began in March and April as teleconferences because of a nationwide personal protective equipment shortage and to reach as many nursing homes as quickly as possible. As soon as it became feasible to physically enter nursing homes, we did so.”

But advocates for the elderly have continued to push for greater oversight of the nursing homes.

“The state needs to be more forceful, there needs to be more enforcement, more accountability, and families should be questioning why these nursing homes still have licenses,” said AARP Louisiana State Director Denise Bottcher.

“There were many sleepless nights where he wasn't sleeping at all. And it was even calling at 11:00 at night, just telling us to be careful,” Grayson said.

Zanco's fears became reality two weeks before the state strike team went into Forest Manor to help with infection control. He went to the hospital for a fever and a suspected urinary tract infection. He passed away May 20.

RELATED: 'It’s a hallelujah moment for us' | Nursing homes will welcome visitors again