Who killed Nanette Krentel? What we know about what happened and when

Two years after Nanette was found in her burned home with a gunshot wound to her head, her family hopes new information will cause a break in the case. 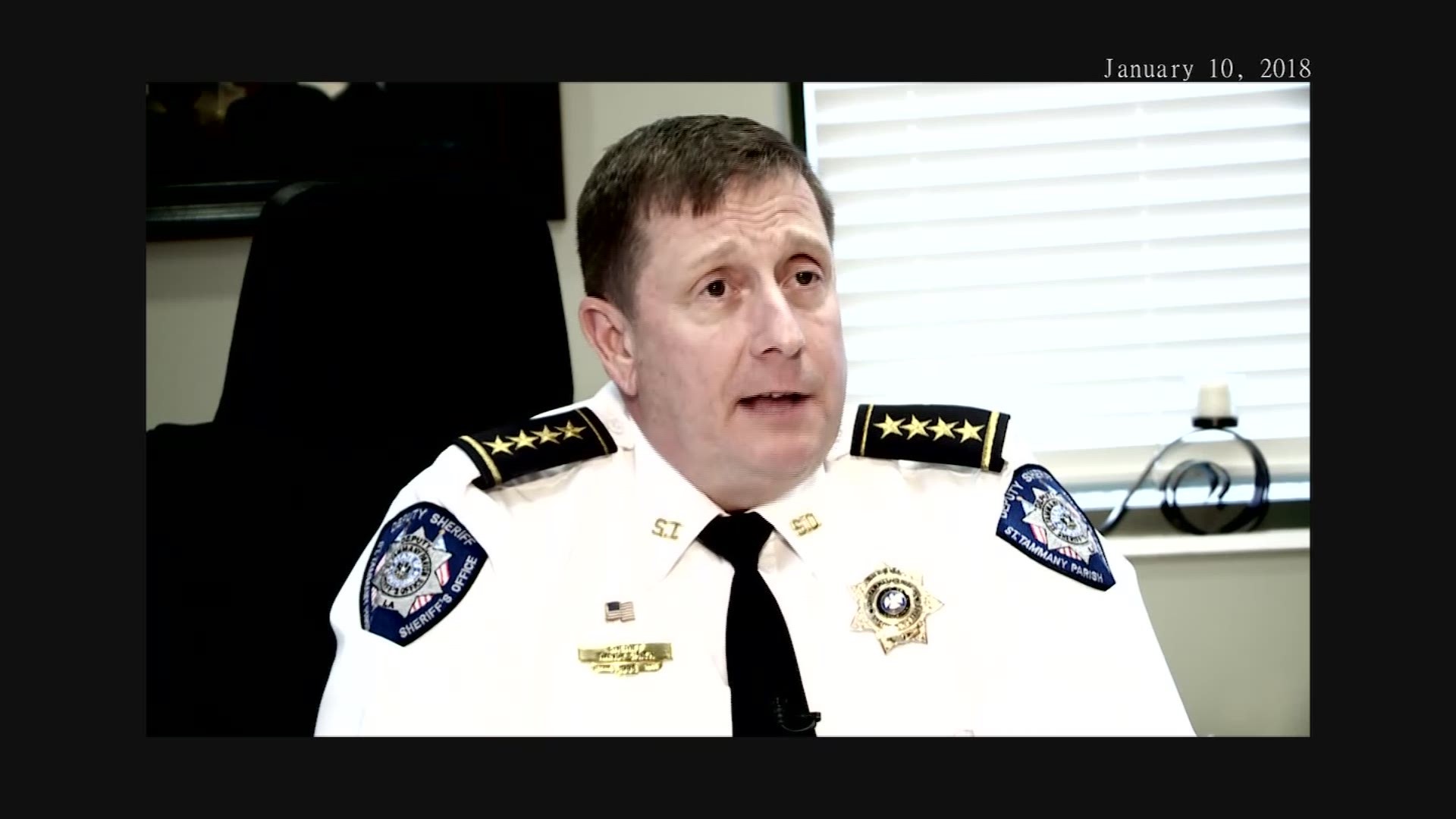 LACOMBE, La. — Family members of homicide victim Nanette Krentel, 49, the wife of a Covington-area fire chief, question whether problems with the investigation in the first 48 hours after her death could cost them justice in the long run.

“First 48 hours is a kind of equivocal stage where you're trying to define what you're dealing with,” said Doug Johnson, a career homicide investigations supervisor in Sioux City, Iowa.

Johnson has been consulting with Nanette Krentel’s Iowa relatives as they push for answers about her death.

July 14, 2017, Krentel’s body was found with a gunshot wound to the head, burned beyond recognition in the Lacombe home she shared with her husband, Steve, the former Fire Chief for St Tammany District 12.

The timeline of the investigation

A year after the fire, Sheriff Smith and several detectives met with Steve Krentel and Nanette’s family separately to show some of them surveillance footage investigators believe shows Nanette in her final hours.

The video, that the family describes as grainy, was taken at a business near the McDonald’s on Northshore Boulevard in Slidell the morning of the fire.

In an audio recording of that meeting, obtained by WWL-TV, detectives said they believe it shows Nanette’s Mercedes SUV going through the drive through the morning of the fire.

The location services on Nanette’s cell phone records backed up detectives’ theory. Her credit card was also used to buy about $7 worth of food, according to investigators.

The sheriff has said there was something moving in the car, which detectives said they believe was her beloved, long-haired chihuahua Harley. Family members said the dog went everywhere with Nanette.

Because the video quality is poor, some of the family members say they don’t think that it is Nanette in the video and theorize she may have been killed the night before the fire.

“We want to release it to the media but there are some things that came up this morning just some cars that come up behind her we want to look at some of the transactions,” Sheriff Smith said on the recording of the meeting on Aug. 22, 2018.

“Why wouldn't we have done that a year ago? Why are we just checking that out today,” asked Wendy Watson, one of Nanette’s sisters.

The McDonald’s video still has not been released to the public.

Detectives told the family there is surveillance footage from another property on Phillip Smith Road, where the Krentels lived, showing the Mercedes headed back to the house at 9:11 a.m. the day Nanette died.

Nanette’s phone records, provided by family members, show an outgoing call to K-Mart about a prescription refill at 10:03 a.m.

Then detectives describe a mysterious outgoing phone call from her cell phone.

“Roughly an hour before the 911 call was the last call to a local individual from her phone. I sat down with and spoke to her. She said it has to be a misdial, didn't know Nan, didn't know Steve,” a detective tells the family on the call.

Video taken in Steve Krentel’s fire department unit on what’s often called a “tattle tale” camera shows him pulling up to the scene of the fire that morning with a co-worker. It’s clear in the video two STPSO units were the first to arrive and detectives said Steve’s was the first fire unit there, however it was not a fully-equipped firefighting apparatus.

The Louisiana State Fire Marshal said they got the call to investigate the fatal fire at 4 p.m.

At 6:37 p.m., Steve Krentel left a voicemail for Dan Watson, Nanette’s father, to call him back.

Once Steve informed Dan he had lost his daughter in the most horrific of ways, Dan called Nanette’s sister, Kim.

Amy Bernard, one of Nanette’s other sisters, recalls seeing the coroner remove Nanette’s remains from the rubble after 9 p.m. that night.

According to the La. State Fire Marshal, STPSO deputies secured the crime scene overnight to preserve evidence. While the fire marshal will only say the fire was intentionally set, sources with knowledge of the investigation said first responders found Nanette’s body laying face-up on the floor of the master bathroom.

Their investigation revealed someone doused the digital video recorder in the living room that held all the Krentels’ surveillance camera footage, with an accelerant. The sources said investigators found more accelerant in the master bedroom and at least two points of origin for the fire.

If there were any clues to what happened to Nanette on the video, they will likely never be seen. Detectives told the family even the FBI could not retrieve the video because the DVR was burned so badly.

At 9 a.m. the morning after the fire, St Tammany Parish Coroner conducted an autopsy on Nanette’s remains and discovered the gunshot wound to her head.

"At this time, scene custody became shared or 'joint' among agencies. The scene was released Saturday evening," said Fire Marshal Butch Browning in a statement.

Johnson said any crime scene should only be released when investigators are certain they gathered all the evidence, because it’s essential to solving the crime, and once the scene is released the evidence could be tainted.

But a source with knowledge of the case said some key pieces of evidence were left buried in the ashes at the Krentel fire scene, including weapons, the carcasses of the Krentels’ two cats and the DVR for the surveillance cameras.

Kim Watson is a criminal prosecutor in Iowa. Her boyfriend, Randy Groetken is a volunteer firefighter with two decades of experience in fire suppression. He knows his way around a fire scene. She knows her way around a crime scene.

On Monday, July 17, three days after the fire that killed Nanette, the Watsons were walking around in piles of ash and debris at the scene.

“As I'm standing there, I'm taking pictures, I just thought, disbelief. Nothing is ever going to come from this,” Kim said.

The magnitude of the damage to the home and its contents was staggering.

“The rubble and ash was pretty deep across that slab,” a detective told the family during their call with STPSO.

“It was. I seen the scene Monday morning. I was in it. I also seen a gun, an AR-style gun that was left behind by law enforcement,” Groetken replied.

The family members said none of them was told Nanette had a gunshot wound until a press release went out from the STPSO the Friday after the fire during Nanette’s funeral.

Steve Krentel said he was not told either, that he also found out about it from a blog article published that Friday morning.

Krentel said his concerns with how the fire marshal’s investigators were handling the scene led him to hire a private arson investigator. He hired a man named Rick Jones.

Jones declined to comment, but sources close to the investigation said Jones found a shotgun and the carcasses of the cats in the days after the initial search as well.

“The fire marshal did their processing of it. We released it. Then we went back under search warrant again after we realized the first two guns collected didn't match the projectile from the autopsy,” the detective told the family on the recording.

Steve Krentel said the couple had 30 guns, many of them inside the house at the time of the fire.

The fire marshal and STPSO re-secured the scene five days later to comb through the ash and rubble again. That's when sheriff's investigators found Nanette's 40-caliber Springfield handgun. Detectives told the family that’s the gun that cannot be ruled out as the murder weapon.

Kim said Nanette would regularly carry that Springfield handgun in her purse, that she and Steve got matching, but different sized versions.

The Krentels liked to target shoot. Their house used to stand on 100 acres of largely wooded land.

Her family members said they received email after email from Nanette in the months, weeks, even days leading up to her death about fears she was in danger.

Sheriff Smith declined to comment for this story saying, “We have spoken with our investigative partners in this case and have decided that we will refrain from any further comment on this open/active investigation.”

Smith has said in the past, he has dedicated additional resources to the case, utilizing federal agencies, conducting 80 interviews, executing dozens of search warrants, but the case is complex.

Sara Pagones of The Times Picayune | The New Orleans Advocate has contributed to these reports.

RELATED: Sheriff sits down for in-depth interview on Krentel case