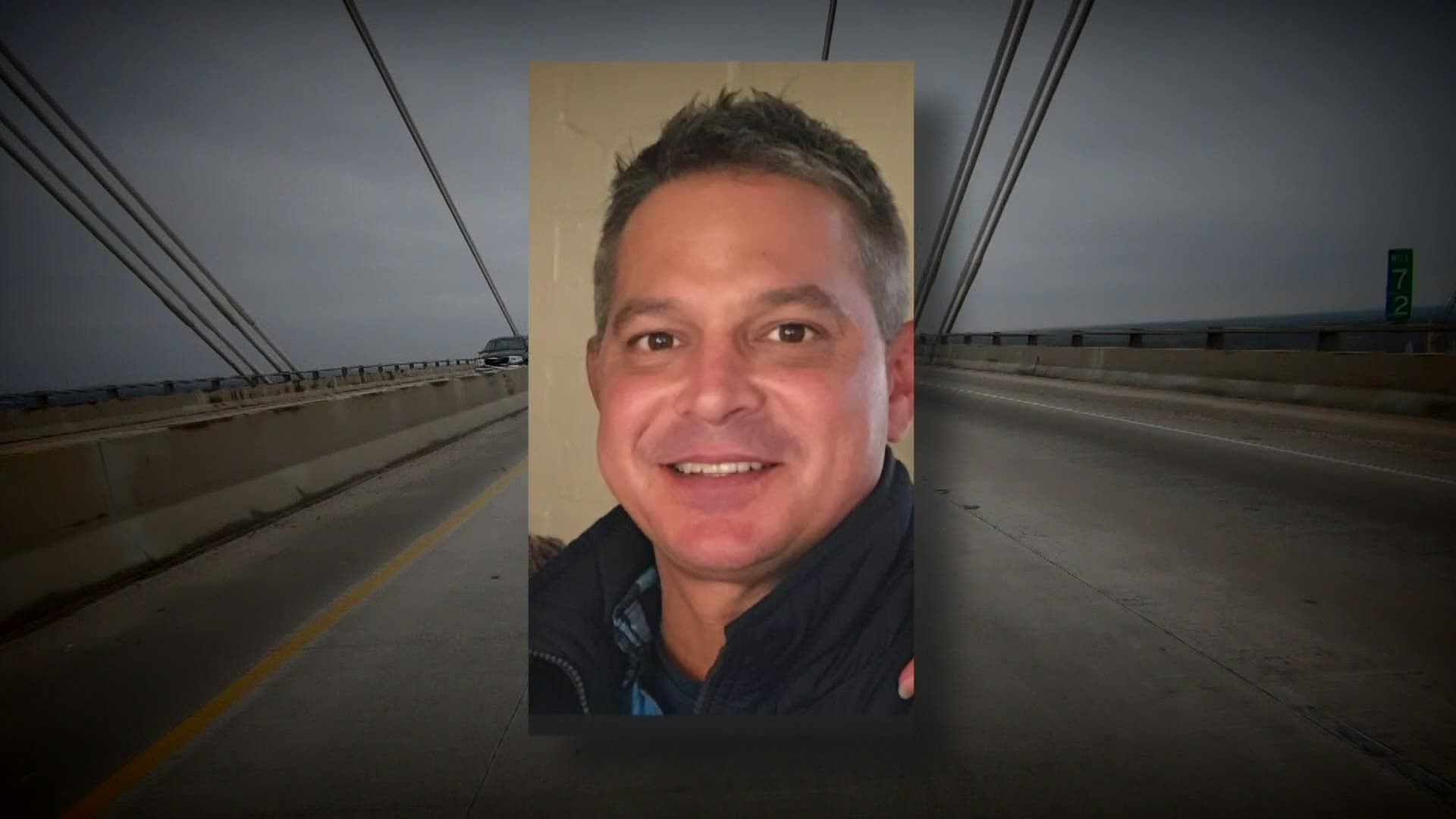 JEFFERSON PARISH, La. — On the night of Jan. 14, a driver crossing the Hale Boggs Bridge struck four construction workers. Three suffered minor injuries, but the fourth was thrown from the bridge, falling more than 150 feet into the Mississippi River. His body is still missing.

The victim, 44-year-old Brady Ortego, had never been named publicly. Until now.

His widow, Adele Domingue Ortego said she is breaking more than a month of silence in an attempt to end another painful silence: the one surrounding the State Police investigation of her husband's death.

Ortego said her husband was a hard worker and devoted family man, proud of his Cajun upbringing in Denham Springs and his more recent married life in Baton Rouge.

The investigation is being handled by Troop B of the Louisiana State Police. It appears that investigators were left with plenty of evidence. The driver left the accident on foot, abandoning his mangled truck, making the fatal accident a hit-and-run, and possibly a negligent homicide.

According to multiple accounts, the driver was injured and was picked up by someone near the scene. Sources say he was treated at St. Charles Parish Hospital.

There also were eyewitness reports of a passenger who remained at the scene.

The talk of the town

WWL-TV learned through multiple sources that several people provided State Police investigators with the name of the alleged driver. The station spoke to several people familiar with those tips. One agreed to speak on the condition of anonymity.

“It's the talk of the town. People are talking about it hair salons and barbershops,” the person said. “I know of at least a few who have called in directly to State Police and given tips of the name of the driver. I know the first tip was within the first five or six days.”

Channel Four followed up on that information, which included the address of the alleged driver. A reporting crew found a wrecked pickup truck sitting in plain sight in front of the house, the damaged front end covered by a tarp.

Directly after the accident, State Police said believe they know who the driver is and they hoped to have that person in custody “sooner rather than later.”

“State Police Crime Lab is also currently processing collected evidence which will help confirm the validity of the sequence of events from the night in question as well as who is actually responsible for the crash.”

Information not vetted yet

Dillon also wrote, “Troopers have received information from various sources and a lot of information has not been vetted as being fact.”

In an update Thursday, Dillon did not address the pace of the probe.

“LSP is continuing to investigate the hit and run crash that occurred on the Interstate 310 Hale Boggs Bridge on January 14th, 2021,” Dillon emailed. “At the conclusion of the investigation, troopers will present physical evidence as well as findings from the scene to the St. Charles Parish District Attorney for consultation of criminal charges. The investigation is ongoing and there is no additional information available at this time.”

The search for Brady’s body has long been suspended. Plans for a funeral are on hold. Adding to the family's grief, Ortego said, neither the driver or those who helped him leave the scene have been held accountable.

“I'm left with so many unanswered questions from Troop B that I don't I don't know where to turn any longer,” she said.

Until an arrest is made, Ortego says closure seems impossible.

“To know that there's an individual out there that is responsible for this, that has not yet taken the responsibility, that hasn't come forward, it's is hard,” Ortego said. “We're the ones left here to suffer and to hurt and to mourn and to try and figure out how to get closure, but I don't know how to do that right now.”

RELATED: Shot in the head in the French Quarter, it took more than one miracle to save police officer's life