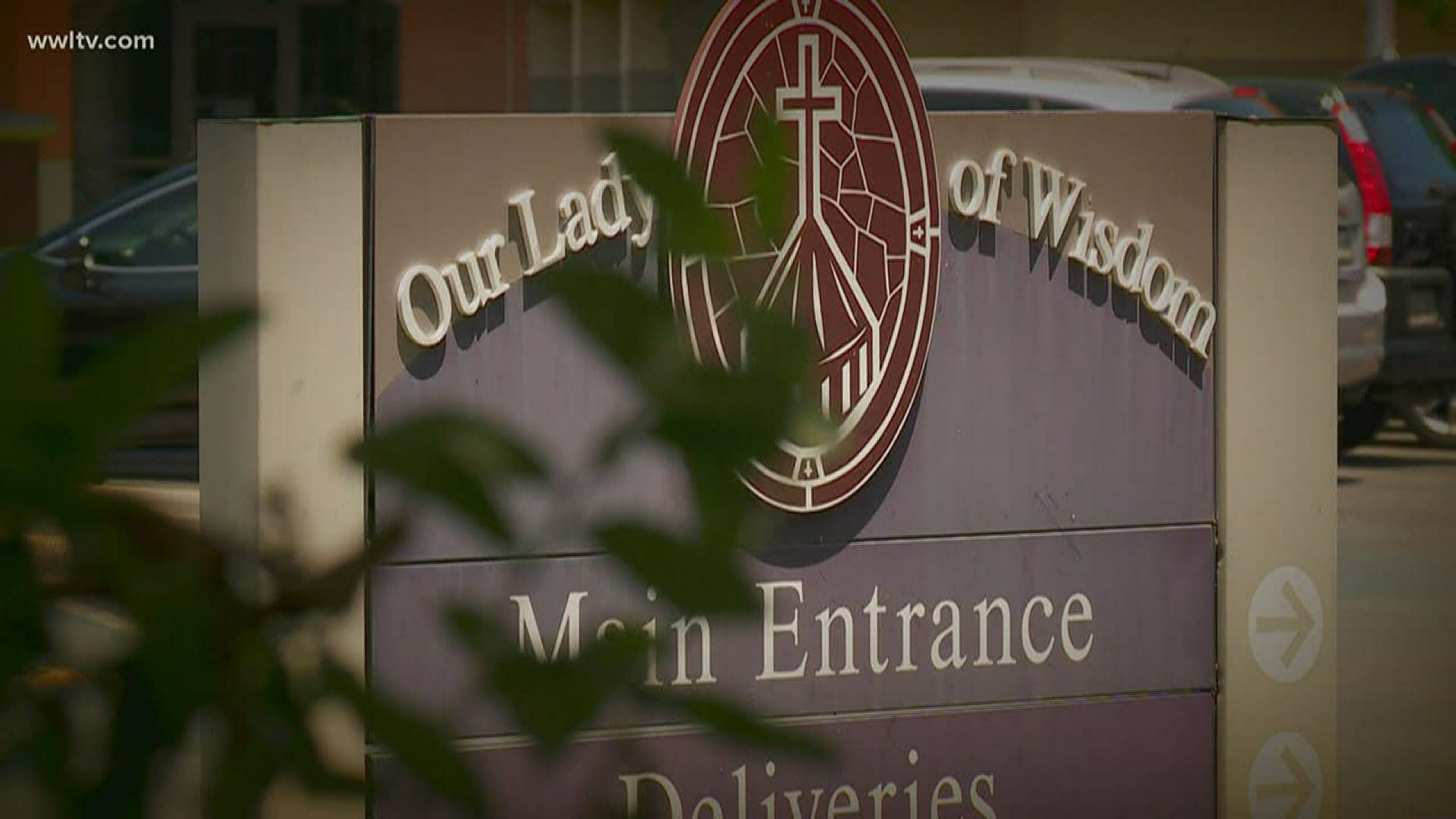 NEW ORLEANS — At the end of March, with the coronavirus pandemic sweeping through New Orleans, the three nursing homes owned by the Archdiocese of New Orleans provided a media tour of an “isolation” building.

The vacant building had been quickly outfitted to keep recovering COVID-19 patients in quarantine and the rest of the facilities safe.

“Right now, we believe that this space is enough to at least serve our three facilities,” said Wayne Plaisance, CEO of Notre Dame Health Systems, operator of the homes.

Speaking outside the building, Plaisance said he was confident of the plan to use the 10 beds at the quickly-outfitted wing to stay ahead of the outbreak. The unused building at Wynhoven Health Care Center had been a convent before it was mothballed.

Enough PPE or not enough?

Plaisance continued, “We have all the protective equipment we need.”

But at the same press briefing, Dr. Hector Cabrera, Wynhoven’s medical director,  contradicted Plaisance on one small but telling point, an early crack in the armor.

“We're in very short supply of that protective gear,” Cabrera said. “So please get the word out there.”

Despite opening the stand-alone wing, problems would quickly spread to all three of the Archdiocese nursing homes: Chateau de Notre Dame, one of the state's first five clusters of COVID deaths, Our Lady of Wisdom in Algiers and Wynhoven itself.

Over the course of the next few weeks, employees at the three homes reported mounting problems: A growing caseload of residents who tested positive, lack of testing for residents and front-line employees, shortage of PPE and, ultimately, COVID-19 deaths among residents at all three homes.

Natalie Henderson, a nurse at Our Lady of Wisdom, said she began taking employees’ concerns to the management of the home, especially after one whole wing was suddenly designated for quarantined patients.

Who tested positive and who didn't?

“They weren’t telling us who was positive (for the virus) and who wasn’t,” she said. “We would have to have masks and things like that, but they weren't really providing the proper masks. I had to bring my own.”

Henderson described how the medical situation deteriorated from a controlled emergency to a chaotic scramble.

“Every day was something different. They didn't call you to tell you anything,” she said. “It was unimaginable. I just felt like I was in a nightmare.”

Throughout the month of April, several employees continued to voice their concerns to their supervisors, as well as to WWL-TV. At the time, none wanted to go public for fear of losing their jobs.

But that's exactly what Henderson said happened to her after she continued to voice her complaints.

“Employees were freaking out,” she said. “They're like, we're not going to work because we don't have the proper equipment. They were scared…We were taking in a lot of people from Chateau, but nobody would identify the COVID patients.”

Henderson said her protests ultimately got her fired.

“They get mad when you have concerns,” she said. “Then there you go, I was terminated.”

Families kept in the dark

The information black hole surrounding nursing homes extended to the loved ones of residents. As the calendar turned to April, the Louisiana Department of Health stopped identifying nursing home clusters, defined as homes that had two or more connected COVID deaths.

Dave Gajee, whose 81-year-old father lives at Chateau, said he first tried to reach out to the home’s administrators to see if he and other families could help out.

Unable to get answers about testing, PPE, or numbers of COVID patients, Gajee said he and his family began having very different conversations.

“It's very stressful,” he said. “My family, we tried to figure out a way if we could pull him out of there.”

WWL-TV’s requests to the Archdiocese for updates about cases and deaths went unanswered for weeks.

But through public records requests to the coroners of Orleans and Jefferson parishes, the station obtained information on COVID deaths at the three homes.

Those records show at least three deaths at Our Lady of Wisdom, seven at Chateau and at least nine at Wynhoven.

'Nobody let us know'

Connie LeBlanc said she was saddened – but not surprised – when she learned about the death toll.

LeBlanc’s 84-year-old mother, Adia Harvey, was among the COVID casualties.

Harvey lived at Wynhoven for two years. A resilient Cajun lady, she learned how to pilot a skiff, worked for years as Town Clerk of Jean Lafitte, then raised four children.

LeBlanc said her mom had already been transferred from Wynhoven to a nearby hospital before her family heard anything.

“That was unbelievable that nobody called us to even let us know she even had a problem,” LeBlanc said. “Were you just going to let her go to sleep and not wake up? To us it just felt that they were writing her off.”

Harvey died with in the hospital on April 8. Because of strict isolation measures, Harvey passed away without any family members around her.

LeBlanc recalled her final phone conversation with her mom.

“I just told her that I love her. And that she was going to kick this.”

As other families heard about the deaths, their alarm grew. Already isolated from their loved ones, they continued to press officials for information.

Isolated from her mom at Chateau, Lisa Philip, began hearing through other families about COVID cases, quarantines and residents passing away. She said she tried to get information, but was met with silence.

“They told me to go to the website,” Philip said, “but there's nothing there giving you any information. At least keep us informed. Let us know what's going on.”

'I couldn't even kiss her'

Somebody finally did reach out to Philip, but it was not the news she wanted to hear: Her mother was dying.

“It was awful,” she said. “I wish I could have seen her before she started the decline. COVID stole six weeks without seeing my mom.”

Philip became frantic trying to break through the isolation orders.

“I'm like, she's actively dying. I wanted to see her one more time. And they told me no.”

Thanks to a hospice nurse, Philip finally got one last visit with her mom two days before she passed away of non-COVID complications.

“I couldn't even kiss her because I was wearing a mask. And wearing gloves,” she said. “When I saw her, I burst out in tears. I just started crying.”

Plaisance declined numerous requests for an interview. But he finally emailed a lengthy statement, admitting that the nursing homes were forced to go into “disaster mode.”

The statement goes on to say: "Despite our best efforts, we have had limited success in preventing the spread of COVID-19. Like many health care organizations, we have lost both residents and staff to the virus.”

In a frank admission, Plaisance wrote that more access to testing and PPE could have saved lives.

“It is possible that our situation could have been much different if we had initially had the ability to diagnose COVID-19 quickly and would have had the personal protective equipment to care for those infected safely.” he wrote. “The primary shortage that existed was with N95 masks, face shields, and gowns needed to protect both staff and residents.”

Plaisance went on to write that the three nursing homes have since turned a corner.

“We have unfilled beds in our COVID-19 units at present and hope that this trend continues, but we are prepared should there be another wave.”

See more of the Eyewitness Investigative series Standard of Care:

MORE: 'Very likely chance if my dad had gone to a different veterans home he'd still be alive'

MORE: As COVID-19 tore through Louisiana nursing homes, these were hardest hit