Many officers say disciplinary oversight, for minor issues as well as uses of force like this one, appears tilted against them. 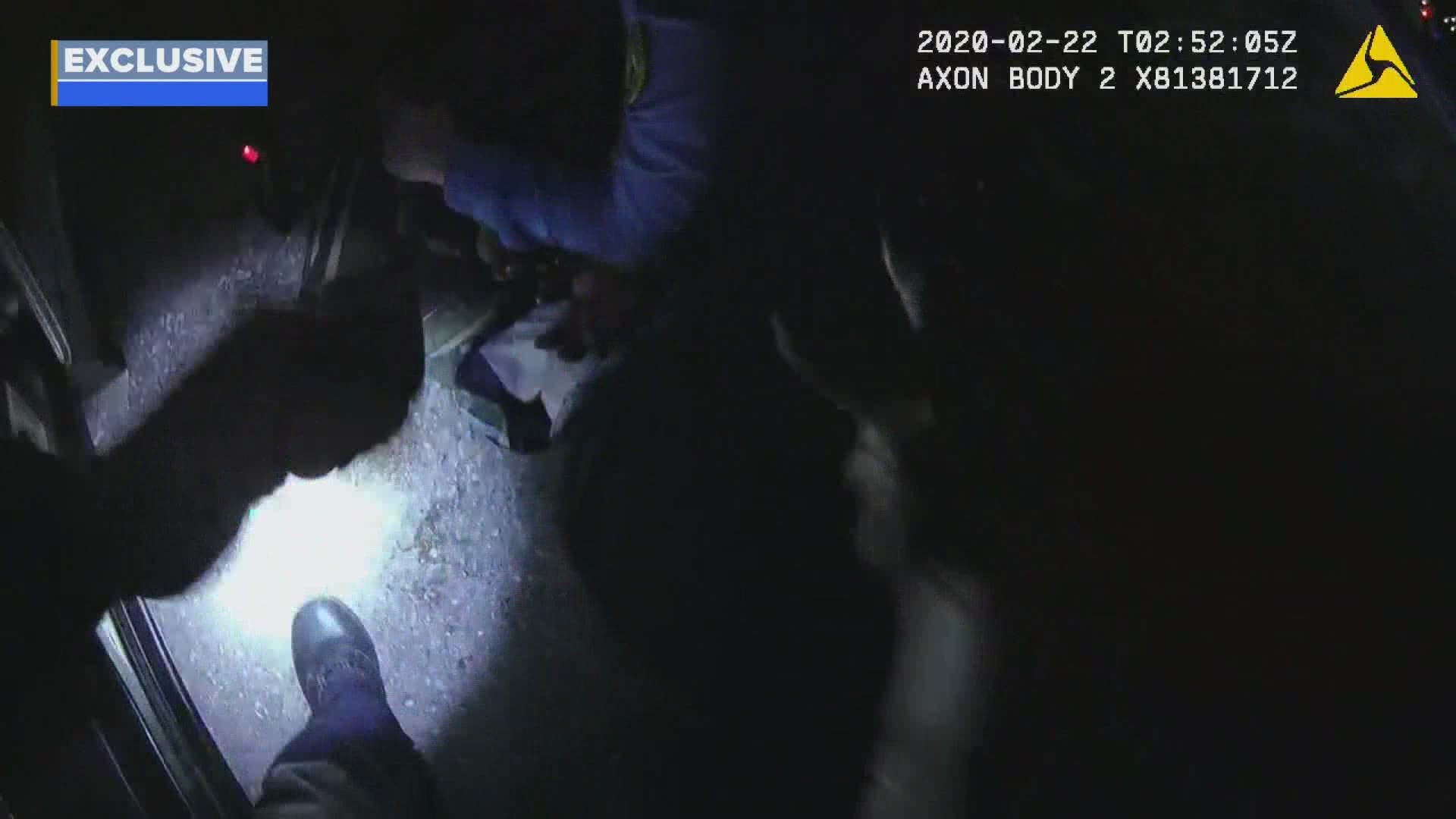 NEW ORLEANS — The arrest of Calvin Thompson began as a routine traffic stop in February 2020 after officers Jonathan Mykulak and Sasha Winchester say he blew through a stop sign while driving erratically.

As viewed from the officers’ body camera video, the scene began calmly under the streetlights at Viola and Leeds Streets in eastern New Orleans.

“It’s all good,” Thompson can be heard saying on the body cam.

Then, with Thompson leaning against the marked police car, Mykulak spots a bag of what he suspects are narcotics in plain view inside the suspect’s car.

“Looks like you got some stuff in the car,” he says to Thompson.

“Who me?” Thompson responds.

Winchester interjects as she approaches Thompson, “Look, I'm going to read you your rights.”

The intensity of the next few minutes, all caught on body camera video obtained exclusively by WWL-TV, is full of the split-second choices that can mean the difference between a good arrest or a botched case, a commendation or a reprimand, even life or death for both officers and suspects.

The video shows Thompson suddenly break away and run to his car and reach under his seat. At this point, the video turns shaky and chaotic as the officers respond.

Everyone’s voices turn to shouts. Mykulak can be seen grabbing the suspect from behind as Thompson leans under his driver’s side seat. Winchester reaches for him from into the passenger’s side, gun drawn.

The struggle is brief, but intense.

“I don't have nothing man,” Thompson screams.

Amid the tense struggle, the video shows Thompson continuing to reach under the seat. Mykulak strikes him in the head a couple of time. At one point, he presses his Taser against where Thompson’s back meets his neck. He fires one jolt, stunning him. Briefly, Thompson goes limp, with Winchester’s gun trained on him the entire time.

As Thompson resumes screaming and resisting, the video shows Mykulak pulling him from the car and onto the ground. Within two minutes, the officers have Thompson subdued and in handcuffs. Within five minutes, backup arrives.

Thompson is booked with possession of methamphetamine, drug paraphernalia and resisting arrest. The officers call EMS, but other than some bruises and the discrete wound where the Taser prongs hit Thompson’s upper back, he is not hurt.

What began that night ended for Thompson when he was sentenced this February to probation. But for Mykulak, the review of his actions continues to this day.

Many officers say disciplinary oversight, for minor issues as well as uses of force like this one, appears tilted against them. Some who recently left the department say the constant scrutiny is a major reason why.

“I think there's a common feeling that officers find themselves in no-win situations,” said Donovan Livaccari, attorney for the Fraternal Order of Police. “One day you're getting a pat on the back and the next time you're getting whacked with a stick.”

Additional oversight of officers, some mandated by a nine-year-old federal consent decree to ensure Constitutional policing, is standard policy at the NOPD. The department entered into the consent judgment voluntarily in 2012 after decades of high-profile cases of police brutality at the hands of officers, some of which ended with the officers convicted for crimes up to and including murder.

Since Thompson's arrest involved force, several layers of review automatically kicked in. The first was by Mykulak's immediate supervisor in the Seventh District, Sgt. Perrin Gaines.

Gaines wrote that the suspect did not lodge any complaints, and even apologized for his actions. After watching the body cam video, Gaines wrote that both officers “exercised great restraint” and their level of force was justified.

That report then went to the Force Investigation Team, FIT, a unit within the powerful Public Integrity Bureau. The finding by two FIT investigators led to a recommendation that Mykulak be reprimanded for unprofessionalism for using profanity, but not for his use of force.

Then, on May 25, the video of a handcuffed George Floyd dying under the knee of Officer Derek Chauvin rocked the world.

Did the NOPD have its own George Floyd case?

A white officer. A black suspect. In handcuffs. Face down. Held to the ground.

And, at one point, screaming out: “I can't breathe.”

“May 25, that terrible tragic incident with George Floyd was publicized,” Mykulak’s attorney Eric Hessler noted. “On May 26, the officer was taken off the street.”

A five-year veteran, Mykulak was reassigned to desk duty as the FIT commander, Lt. Kevin Burns, reviewed case. His findings were very different than the previous reviews.

Lt. Burns wrote that he had no issue with the head strikes or the Tasing or Winchester pulling her gun. He zeroed in on a sequence after Thompson is in handcuffs and Mykulak's knee strikes the suspect in the back and, for a brief period, pins him down.

In his taped administrative statement under questioning by Burns, Mykulak explains his version of events.

“Why do we need to place a knee on him?” Burns asks.

“He was still moving,” Mykulak responds.

Burns presses Mykulak on his use of a knee. Mykulak says it was unintentional.

“It was a slip. And my hand slipped off the car that I was leaning up against,” he says.

In her statement, also taped on a recording exclusively obtained by WWL-TV, Sasha Winchester supports her partner.

“He was moving around a lot. Both of us felt like we needed to be on him,” she says.

“Did it draw any concern to you?” Burns asks.

“No, I would have said something.”

Calling her partner by his nickname “Mak,” Winchester later adds, “I don't think he would try to hurt the dude on purpose.”

We asked LSU criminologist Peter Scharf, co-author of the book on use of force called “The Badge and the Bullet,” to review the body camera video.

His assessment: “Was this excessive? Yes, but I think it's a case for re-training, not a case for suspension or firing.”

But in his final report, Burns determined that Mykulak's knee strike was “intentional.” For her part, he found that Winchester did not understand “appropriate levels of force.”

But something else appears in Burns' report that was not noted by any of the previous investigators.

Burns' report quotes Thompson saying, “You're on my neck, I can't breathe.”

With the George Floyd case seared into the country's consciousness, Hessler quickly points out at Mykulak’s disciplinary hearing that not only did his client deny ever being on the suspect's neck, he never uttered the words, “You’re on my neck.”

At the hearing, before Public Integrity Bureau Chief Arlinda Westbrook and two other commanders, Hessler challenges Burns to find the point on the video when Thompson says anything about his neck.

“Could you point out on the body cam video where he said that?

After about 10 minutes of reviewing the video, Burns responds, “He says please get off me. He doesn't say you're on my neck.”

Hessler notes, again, “The very damning and punitive statement, ‘You are on my neck’ admission is not there.”

Mykulak, defending himself, goes even further at the hearing.

“I did not do that,” he says. “I did not put a knee on his neck. He never once said, ‘You are on my neck.’ He never made any complaints about his neck at any point.”

Later, Hessler said his last-minute review that caught the error may have saved Mykulak’s job.

“Had we not figured it out, he very well likely would have been terminated.” Hessler said.

Hessler promptly lodged his own complaint against Burns for filing a false report, which can be a firing offense. The matter was investigated, but determined to be “unfounded” by an independent review team because Burns apologized and it didn't “impact the outcome.”

But one other allegation against Mykulak did make it into the final determination of his suspension. The final disciplinary letter signed by Police Superintendent Shaun Ferguson states that in lifting up the suspect, Mykulak allowed him to fall to the ground.

A dash cam video seems to contradict that. The suspect in the white shirt is ushered into a police car without falling and Mykulak is not even involved.

“It was the two responding officers who got him up and put him in the car,” Mykulak says at the hearing.

Mykulak was given an 80-day suspension, approved by Ferguson. He is appealing through Civil Service. Hessler and the Police Association of New Orleans went one step further.

In a letter to Ferguson, Hessler wrote about officers' “distrust” of PIB, stating that cases like Mykulak’s “reinforce officers' belief that PIB protects their own and allows fabricated evidence to be used against officers.”

Mykulak served his suspension and is back on the street while he mounts his appeal to get his time and pay back.

Winchester was not disciplined, but was reminded about use of force policy.

In a statement today responding to our story, Chief Shaun Ferguson wrote, "We do not believe that any of our Constitutional policing requirements or the standards we hold our officers to hinders NOPD's ability to fight crime or prevents officers from doing their job in a pro-active manner."