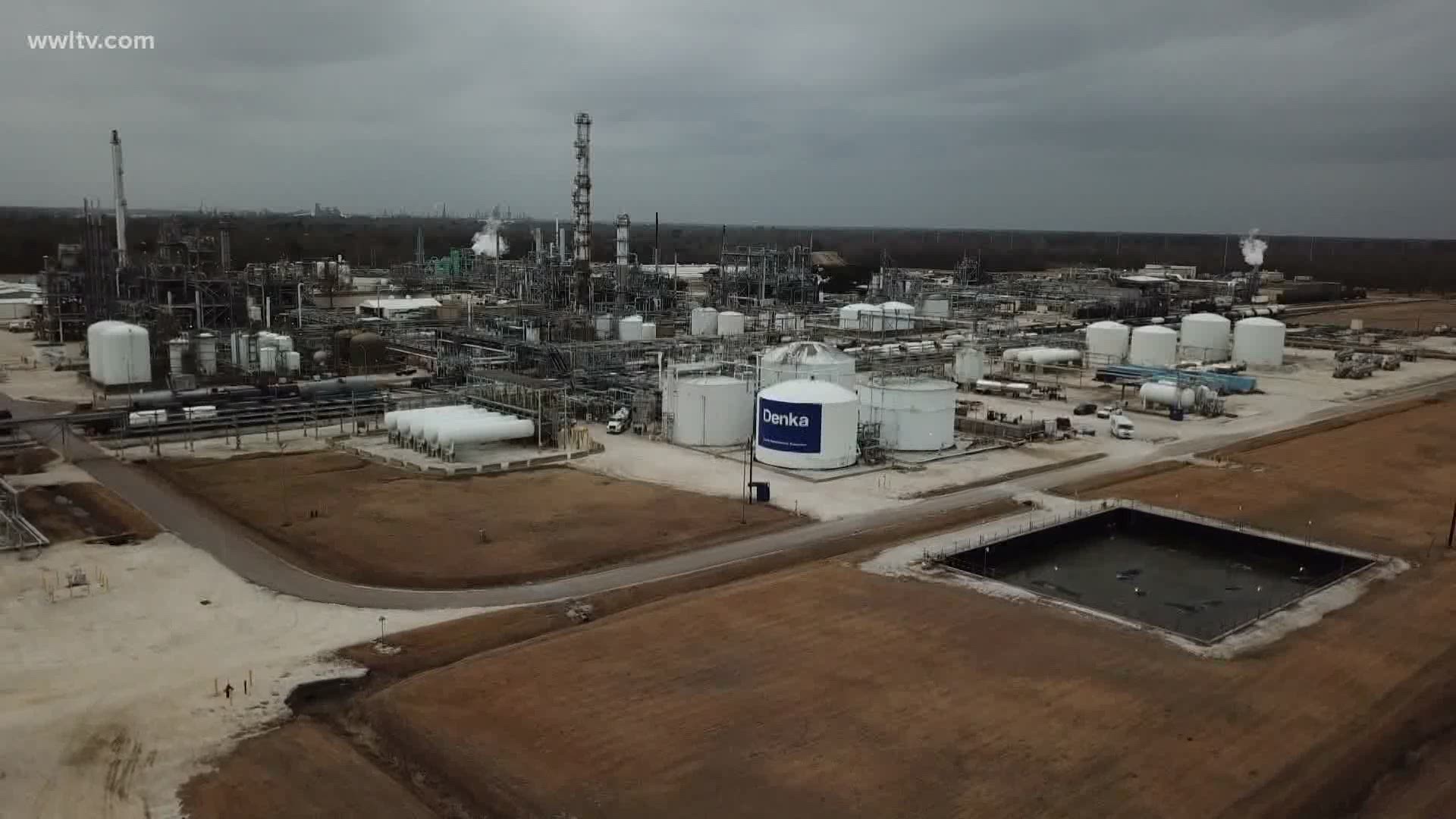 RESERVE, La. — Before the DuPont-Denka chloroprene plant in Reserve shut down temporarily in June, the average concentrations of the toxic chemical in the air were on the rise again at a nearby elementary school.

That has the Concerned Citizens of St. John and other environmental advocacy groups worried that major improvements in curtailing emissions have begun to backslide, just as a government monitoring program is set to end later this month.

Community fears about the chemical emissions emerged in 2015. DuPont sold its chloroprene manufacturing operations to a Japanese firm, Denka Performance Elastomer, in November 2015, and that same month the U.S. Environmental Protection Agency released its National Air Toxics Assessment. It found the areas in St. John the Baptist Parish nearest the plant had, by far, the highest risk of cancer from air pollution in the country.

Denka made agreement to reduce emissions

Denka said it was blindsided by the emissions issue, but agreed with the Louisiana Department of Environmental Quality to reduce its chloroprene emissions by 85 percent by 2018. An EPA review earlier this year confirmed the company had achieved that goal by installing $35 million in new emission control equipment.

EPA Region 6 administrator David Gray came to Reserve in February to tell residents the government was still monitoring the ambient air at six sites in the community around the plant. After collecting 2,500 samples in four years, Gray said the agency had the data it needed to assess the lifetime risk to residents. But he urged more patience as the EPA prepared to install new technology that would monitor large spikes in chloroprene concentrations, in an effort to pinpoint why those were still happening.

“It is moving, it is improving. And we’re not done, so we admit that we’re not done,” he said at the meeting held Feb. 5 at Tchoupitoulas Chapel. “We need more data. And I know, I know that’s tiring.”

But just two weeks ago, EPA sent a letter to the Louisiana Department of Environmental Quality stating that the new monitoring program, using a technology known as “S-PODs” had experienced some “instrument performance issues.” Meanwhile, the letter said the community monitoring program that had been measuring average ambient air concentrations over the last four years would end this month.

EPA sent WWL-TV a statement Friday morning saying the S-POD monitoring "is now fully operational, and the data from this monitoring will be posted before the end of September on the same website where we currently post the community data."

That web address is: https://www.epa.gov/la/denka-air-monitoring-data-summary

The original monitoring program that ends Sept. 30 has measured significant decreases in chloroprene at all six monitor sites since 2017, but the one at Fifth Ward Elementary School, about half a mile from the Denka plant, saw a 27-percent increase over the first four months of 2020 as compared with the same period in 2019, according to analysis by former EPA scientist Vickie Boothe.

“The control equipment was fully implemented in 2018,” said Boothe, an epidemiologist and environmental engineer who worked on the National Air Toxics Assessment and retired from the Centers for Disease Control and Prevention in 2019. “So, the fact that in 2020 you're seeing increases in those averages is very, very concerning, especially since those monitors are going to be removed.”

Boothe moved to New Orleans to work with environmental groups, including Citizens Against Death Alley and the Sierra Club. Denka acknowledged a slight increase in the first four months of 2020 as compared with 2019, but questioned Boothe’s methodology, saying she was cherry-picking numbers from the EPA’s data.

Denka argues 0.2 micrograms is a flawed standard and shouldn’t be applied to the safe levels for acute exposure or even the average concentration measured over a full year. The state of Louisiana has set no standard for chloroprene exposure since the EPA declared it a likely carcinogen in 2011.

Denka spokesman Jim Harris said the company also takes issue with Boothe’s use of only the first four months of 2020 to show a 27-percent increase at Fifth Ward Elementary School. He said that adding the month of May alone would have lowered the increase to 17 percent.

Boothe said she selected the first four months because Denka’s public reports indicated a significant slowdown in chloroprene production in May and June, and the last publicly available emissions data posted by EPA only runs through July 16.

But Harris said “it really doesn’t make sense to look at partial years,” which is why the government waited for annual totals to confirm the company had achieved the 85-percent reduction by the end of 2018.

He said the overall emissions have continued to decrease every year, with the latest figures showing they have now reduced them by 88 percent since 2016. What’s more, Boothe’s own data show the other five monitoring stations surrounding the plant all showed lower average concentrations of chloroprene for the first four months of 2020 than they did in those four months of 2019.

The only one that didn’t was Fifth Ward Elementary School, in the fence line community southwest of the plant.

“There will always be fluctuations in air monitoring readings at individual sites, based on weather, production levels, maintenance and other factors, and that is precisely the reason that scientific monitoring is dependent on long-term trends and more data points,” Harris said. “Reducing public understanding of the level of chloroprene in the air to two cherry-picked four-month periods is not representative of the long-term decrease in (Denka’s) emissions.”

“The school district has been in contact with both the Concerned Citizens of St. John and Denka regarding this matter and will continue to monitor the situation along with these groups,” the district said. “As is the case as we continue to implement plans for the successful return to school in the midst of the coronavirus pandemic, our students' health and safety is and always will be a top priority.”

Denka plant manager Jorge Lavastida said the company is committed to continuing to monitor the ambient air in the community even after the EPA program goes away. Harris said those data would be reported to EPA and the Louisiana Department of Environmental Quality on a monthly basis.

U.S. Rep. Cedric Richmond, D-New Orleans, has sent a series of letters to the EPA this year expressing concern that the new S-POD method would not keep the community informed of the risks. He held a virtual town hall meeting with St. John residents in April and noted the parish’s high rates of COVID-19 and high coronavirus death rate. In a letter to Citizens Against Death Alley, Richmond said asthma and other conditions linked to air pollution were making the outcomes worse for COVID-19.

Denka spokesman Harris disputed that characterization, saying the high COVID-19 rates in St. John were attributed to other pre-existing health issues, most notably an outbreak at a Veterans Affairs nursing home far from the Denka plant.

“Chloroprene had nothing to do with it,” he said.