The pool installation has led some to question whether it played a role in the building collapse. 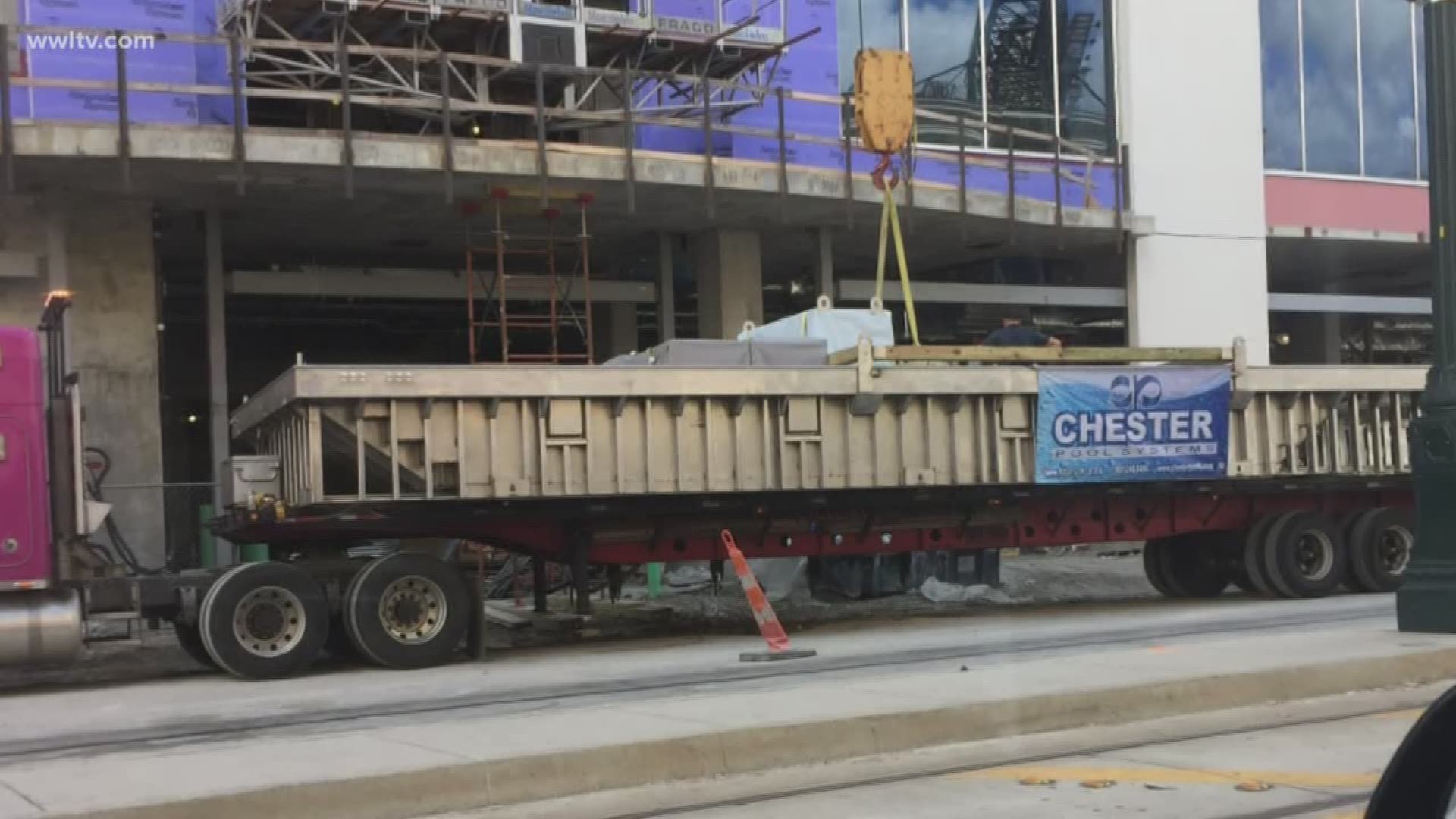 NEW ORLEANS — A large swimming pool was lifted to the top floors of the Hard Rock Hotel construction site hours before the Rampart Street side of the building came crashing down, according to sources familiar with the site.

A photograph taken Thursday from the Rampart Street side of the construction site shows a large swimming pool attached to a lift crane for installation. A banner on the side of the pool was marked "Chester Pool Systems," a company out of New Albany, Indiana.

Chester Pool Systems could not be reached for comment in time for this report, but responded to WWL-TV on Wednesday, Oct. 16. See their statement here.

Drone footage taken after the accident shows a pool, with a Chester sign on it, installed on a lower floor on the Canal Street side of the building, atop a section of the building that did not collapse. But construction documents filed with the city of New Orleans show proposals for pool equipment and a rooftop bar on the Rampart Street side where the steel and concrete caved in Saturday morning.

RELATED: Did you work on the Hard Rock Hotel project? We want to talk to you

Credit: WWL-TV
A photograph taken Thursday from the Rampart Street side of the construction site shows a swimming pool attached to a lift crane to be installed.

"There was a report that there was a pool being installed either that day or the day before," said Brian Trascher, a lobbyist and spokesman for Citadel.

But the company says it was lifted to the upper floors Thursday and now the heavy weight of it is a cause for concern for first responders.

New Orleans Fire Department Superintendent Tim McConnell said they placed a drain in the installed pool Monday to prevent it from holding water and adding to the weight on the structure.

It's unclear what factors led to the collapse, and Douglas Castro, a subject matter expert on OSHA safety training said the incident investigation could take six months. Trascher said Citadel will cooperate with investigations by several entities.

"Cause -- you have to treat it like a plane crash. We have to get through search and recovery first, then deconstruction, but rest assured, the city’s going to be conducting its own investigation. We have our insurance companies, our bonding companies, OSHA. There’s going to be many many levels of investigation and eventually it will come out what happened," Trascher said.

There were also concerns about whether concrete poured on the top floors had been given enough time to cure. Trascher said that's a question Citadel's engineers could answer after the last person trapped in the rubble is recovered and the structure and cranes are stabilized.

City officials have said the site is so unstable they are concerned for the safety of first responders as they continue to try to recover at least one body.

Trascher said the chief engineer for Morrow Cranes, the crane operator on the project, has come to New Orleans to look at how best to stabilize the building and to help investigators. He also promised to make engineers available for interviews to address what happened, but said they are now huddled at the incident command site on Canal Street, trying to deal with the unstable building and cranes.

Trascher said Citadel has had a spotless safety record up to this point.

"Citadel has been in business for 16 years," he said. "We’ve never had an OSHA violation, we’ve never had a lost-time accident. This is something that’s completely new for us. Everything we could have done to ensure safety, we did."

There are also questions about whether longstanding financial concerns with the project could have contributed to engineering failures. WWL-TV first exposed graft by the lead developer on the project, Praveen Kailas, in 2012, and based on the station's reporting, federal prosecutors charged Kailas with conspiracy and theft of public funds.

He pleaded guilty and was sentenced to 30 months in federal prison in December 2013. Judge Sarah Vance had harsh words for Praveen's father, Mohan, who she said had let his son take the fall for him.

Mohan Kailas remained the lead developer on the 1031 Canal Street development project, which started as a multi-use shops, hotel and condominium complex and later became the planned Hard Rock Hotel. But Kailas had several financial problems and the project screeched to a halt. In 2014, the city sent demand letters to Kailas for more than $300,000 in unpaid permitting and inspection fees.

WWL-TV went to Kailas' office Monday, but when he saw the news camera he ran away.

"The highest priority of the development team is the concern for the families involved. While there are many questions that are unanswerable at this juncture, our prayers and sympathies are with the good men and women who have been affected. The development team, 1031 Canal Development LLC, is working with authorities to monitor and assist in recovery activities. 1031 Canal Development LLC is a development company and does not conduct construction or engineering. We thank the first responders for their quick actions to assist those in need."

CORRECTION: Sources originally told WWL-TV that the pool had been lifted to the roof on Friday, but Chester Pool Systems confirms that the pool was lifted on Thursday.