A bus driver, who says her daughter was injured during the incident, speaks out after seeing our Taken for a Ride investigative series. 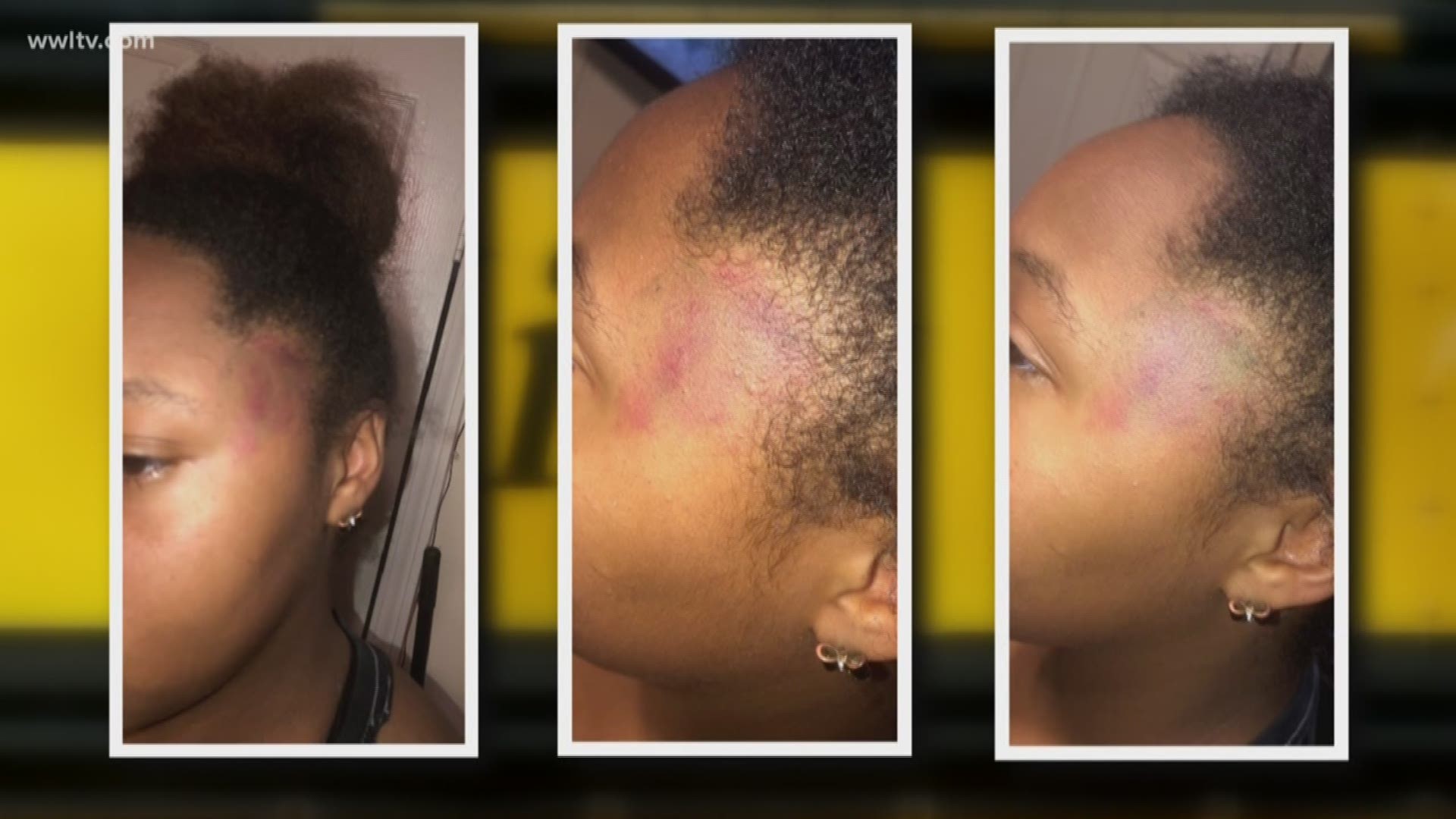 NEW ORLEANS — A school bus full of high school students gets a flat tire on the Crescent City Connection bridge, during the morning rush hour Nov. 16, 2018, the Friday leading into the Thanksgiving break.

The tire comes completely off the bus and the bus keeps going in the HOV high-occupancy vehicle lanes for a short distance.

The teens on the bus shout as the back right tire is left behind. They take out their cell phones and take videos, cursing and yelling that the driver is “driving on three wheels.” Then several of them open the back emergency exit and get out onto the busy highway, in a section where there is no shoulder.

That’s what’s visible and audible in videos taken at the scene by Darielle Benjamin, a junior at New Orleans Charter Science and Math. She says in one of the videos that she fell and hurt herself when the tire came off. She also said the driver never got off the bus to secure it or put up emergency cones.

Her mother, Tameko Benjamin, has been a school bus driver for 15 years. She says the driver of Darielle’s bus didn’t do what was necessary to keep the kids safe.

When City Councilwoman Kristin Gisleson Palmer heard about the incident, she said it raises an issue of driver training that she wants the city to consider regulating.

“How are these bus drivers trained?” said Palmer, who recently sponsored a new city ordinance that places the largely unenforced state school bus regulations under the city’s Safety and Permits Department by requiring buses and drivers to get CPNC, for-hire vehicle permits and semi-annual inspections.

“Because at the end of the day, when an accident like that happens, we’re even putting our kids in greater risk situations when they’re out on the side of the bus, on a busy highway, on the bridge,” Palmer said.

Benjamin reached out to WWL-TV after seeing our “Taken for a Ride” investigation last month, which exposed a lack of oversight over public charter school buses now that the system is fragmented and controlled by 90 different independent charter schools in the New Orleans metro area.

“The Taken for a Ride, I just felt like it was every single thing I had been going through,” Benjamin said. “My child rides a defective bus, I don’t know the bus driver, when asked for the phone number to contact the bus driver, I’m refused. I mean, I think as a parent I am due that right to know who my child is riding on the bus with!”

New Orleans Charter Science and Math’s head of school, Monique Cola, said that after the flat tire, a school counselor and a parent of a student happened to pass by and stop their cars to help. They picked up a few of the students. The rest, including Darielle, waited for another bus to come take them to school, where they soon got on another bus for field trips.

The school counselor went on the bus and asked if the students were OK, Cola said, and none of them indicated they were hurt. But the Benjamins say everyone was in a hurry to get to field trips for visits to local colleges.

Tameko Benjamin said later that day, however, a welt developed on Darielle’s left temple, where she says she hit the metal part of the seat as the bus lost its tire. The next day, the bruise got darker and they took pictures of it, the mother said. It was during the family’s Thanksgiving trip that Darielle began complaining of headaches, she said, and medical records show she went to the ER at Ochsner when they returned, 10 days after the bus incident.

The school’s bus contractor, Kids 1st, disputes the Benjamins’ descriptions of the incident. Kids 1st owner Rory Askin stood by his driver’s handling of the situation.

“Why would I punish her for a mechanical failure,” he said. “It was just a flat tire, a blowout.”

Cola said the incident was serious, but referred to it only as a “flat tire” without acknowledging that the tire came completely off the bus before the bus stopped moving.

Askin also said he doubted Darielle was really injured. He questioned why she wouldn’t have reported her injury to the school immediately and how she was able to go on to take the field trip.

He accused the Benjamins of being opportunistic, seizing on WWL-TV’s “Taken for a Ride” investigation to target Kids 1st. WWL-TV singled out Kids 1st in its previous stories for its record of safety violations.

The State Police found major safety violations and 67 code violations on just eight of Kids 1st’s 40 buses during a surprise inspection at the end of November, two weeks after the incident on the bridge. The police found Kids 1st buses without license plates, no proof of insurance, inoperable brake lights and turn signals, broken emergency exits and even a Kids 1st driver operating a bus on a suspended license.

Benjamin started texting Askin after they returned from their trip, showing him photos of the bruise on Darielle’s forehead and telling him her injuries were serious. But Askin had his attorney send Benjamin a letter asking her to stop contacting him directly.

Benjamin says she hasn’t gotten any satisfaction from the school either. She said the school never notified parents about the incident on that day, that she learned about it from Darielle’s frantic phone calls. But Cola said the school has been as responsive as it could.

“After Thanksgiving break, about 10 days or so after the flat tire incident, a parent contacted NOCSM to let us know that the parent's child had been injured when the bus had the flat tire,” Cola said. “The school had not previously been informed of any injury, and of course we were concerned for the student's well-being. We were able to obtain and pass along information that the parent requested.”

Benjamin said neither the school nor Askin has been willing to tell her who the driver of her child’s bus was. We asked the school for the name and it would not provide it. Askin would only say the woman’s name was Antoinette and she had been driving that route for much of the fall.

Under the Louisiana Public Records Act, the public charter schools have to turn over records related to their bus contracts. New Orleans Charter Science and Math did so in January, including a list of routes and drivers. The driver listed for Darielle’s bus was a man who Askin said left the company early in the school year.

We spent months gathering bus records from all 90 area charter schools. But now it appears several of the bus driver records we received are incorrect or out-of-date.

For instance, KIPP provided a list of drivers for 2018-19 at its nine schools from its bus provider, Hammond’s Transportation. The list includes Tameko Benjamin, who says she worked for a Hammond’s subcontractor last school year. KIPP did not respond to WWL-TV to explain the discrepancy.

Benjamin works for Wells Transportation now, driving students to and from Noble Minds Institute for Whole Child Learning, a charter school in the Riverbend section of New Orleans. She also worked for Wells in 2016 when court records show she rear-ended someone after the brakes on her bus failed. She said it was a replacement bus and she hadn’t had a chance to do a pre-check on the brakes. A lawsuit filed by the other motorist states that an NOPD inspector determined the bus’ brakes “were indeed defective.”

“Because I’m a bus driver, I understand that things happen,” she said.

But she says there’s a difference between her accepting the blame for an accident, and what she sees all too often on charter school buses, where few are willing to acknowledge the problem.

“We wouldn’t be sitting here having this conversation if everyone was more transparent,” she said. “All the bus drivers, the bus company owners, the schools, they need to be more transparent.”