The Vancouver couple both left reviews about a bad experience with a roofing company and were later served with a lawsuit over those reviews. 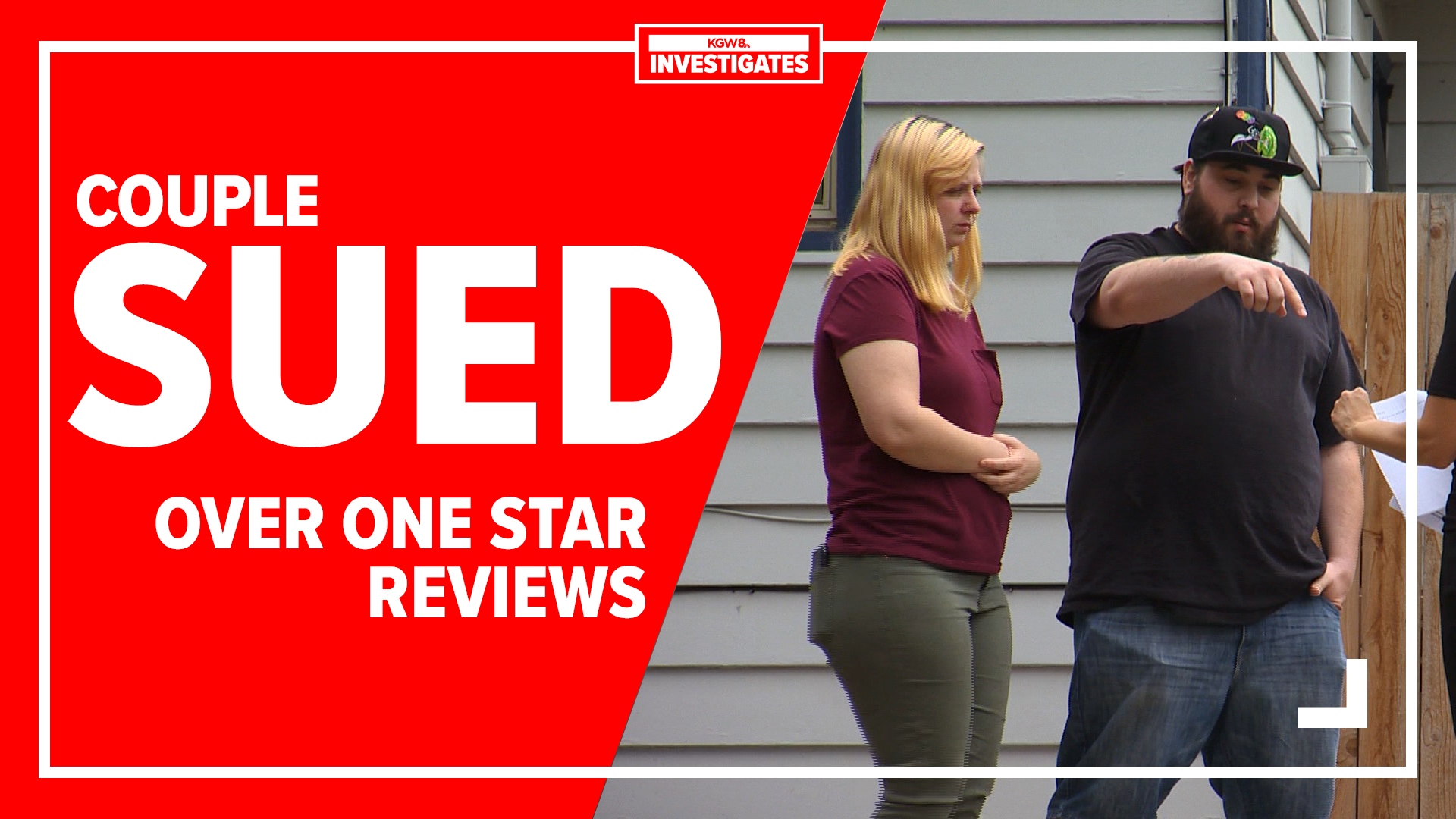 VANCOUVER, Wash. — When Autumn Knepper and Adam Marsh's roof started to leak at their Vancouver home a few months ago, their landlord sent over Executive Roof Services (ERS) to check it out.

An employee came, looked in the attic and said there were a few spots to fix.

“I asked him about a timeline about when this might get finished. He told me to call the office the next day,” said Knepper.

Knepper said she called the office and talked with the receptionist, who she said was rude from the time she answered the phone.

“She refused to give me any information. She said I would have to get it from the landlord. I asked to speak with the manager and she laughed at me. She told me I was verbally abusing her and that she was the office manager. She hung up on me,” said Knepper.

Marsh said he called ERS and had a similar bad experience with the woman who answered the phone.

“She was just super rude, told me that she was office manager and there was no one else I could talk to and hung up on me,” said Marsh.

The couple each wrote a one-star Google review detailing their experience with the receptionist.

Marsh also filed a complaint with the Better Business Bureau that stated, “The business came to do an inspection of the roof of our residence and refuses to give any details about the findings of scheduling of repairs to us the tenants.”

Marsh said the BBB never formally posted their complaint because the couple weren't direct customers of ERS. The landlord had hired the company, not the tenants.

Knepper said they were then contacted by the owner of ERS, Michael Mecham.

“He told me that he knew where I lived. He said he had forensics guy and that he would gladly spend a hundred thousand dollars suing me,” said Knepper.

Knepper said the owner texted her and said the review needed to be taken down before “more damages are done.”

Knepper said she called the police, which led to an officer asking Mecham to no longer contact the couple.

“We thought that was the end of it,” said Knepper.

It wasn’t. The couple later received letters from the Jordan Ramis law firm on behalf of ERS that demanded they take down the reviews.

When the Google reviews stayed up, Knepper and Marsh were served with a lawsuit filed on behalf of ERS for defamation and intentional interference with business expectancy.

David Bowser, the attorney for ERS, said this lawsuit is not about the negative reviews.

“The first thing I think your viewers need to understand is that my client is not suing one of its customers for leaving a bad review. That's not what's going on here,” said Bowser.

Bowser said the couple did not hire ERS, the landlord did. Because of that he said they weren’t entitled to the information they requested -- a project report and timeline -- because they were not customers or clients of ERS. This is part of our exchange when we asked Bowser about the suit:

Cristin Severance, KGW: "Whether they're paying customers or not, shouldn't they be entitled to write about their experience? They said the receptionist was rude."

David Bowser, attorney: "It depends why they did that. If they were doing it merely to express their opinion, that's what other customers have done in the past. I don't have an issue with that. ERS doesn't have an issue with that. But when you cross the line and you use this forum to cause intentional harm to a family-owned business and hurt them and their employees and their business, you've crossed the line."

Severance: "How did they intentionally harm ERS by writing about a rude receptionist?"

Bowser: "They intentionally harmed ERS by posting one-star reviews for the purpose of getting a report they weren't entitled to."

Bowser said the BBB complaint filed by Marsh, which was never posted, proved they wrote the review to get the report.

ERS has an A+ rating with the BBB.

Marsh said they filed the complaint because of their bad experience with the company’s receptionist.

Paul Levy, an attorney with Public Citizen Litigation Group in Washington D.C., said when it comes to negative reviews, if the review is truthful, the person who wrote it should be protected.

Levy said this is an example of a SLAPP or “strategic lawsuit against public participation.”

SLAPPs are lawsuits designed to "silence critics by forcing them to spend money to defend a lawsuit."

Washington had one of the strongest anti-SLAPP laws in the country, but it was deemed unconstitutional in 2015 after the state supreme court ruled it violated a person's right to a jury trial.

Knepper and Marsh were sued at the end of June.

“The question is whether the Washington anti-SLAP law will apply to this case, if it's still pending on July 25, even though it was filed previously,” said Levy.

Bowser argues this is not a SLAPP filing.

Bowser: “That is not what a SLAPP lawsuit is, a SLAPP is a motion. This is a lawsuit. The lawsuit asserts claims for defamation and for intentional interference with business expectancies,” said Bowser.

Severance: “So, this is not trying to silence someone because of something negative?”

Bowser: “Not something that they legitimately had a basis to give an opinion on.”

While Levy believes the couple could win in court, they still need to pay an attorney.

When the couple set up a go fund me to raise money for an attorney, they were again sent cease and desist letters by the company

“I just don't want my future completely destroyed by something so small. This is obviously a man who is well off and can afford to do this, and I can't afford to fight it. And I think he knows that,” said Knepper.

The roof was ultimately repaired by another company.

Do you have a story idea for Cristin? Email her at CallCristin@kgw.com