As Black Panther continues to break box office records, special screenings are being held across the nation for kids excited to see a mostly black cast. 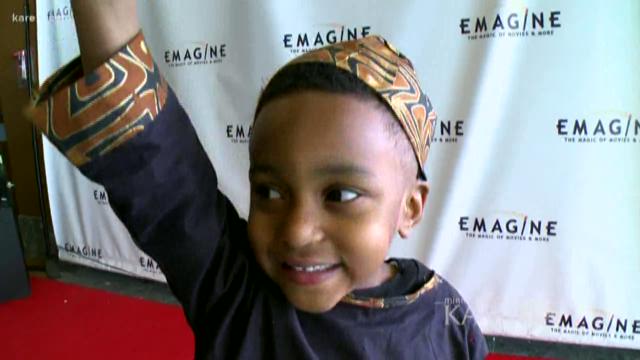 PLYMOUTH, Minn. -- From celebrities to teachers, people have been renting out movie theaters for private screenings of Black Panther.

On Sunday afternoon, more than 100 kids from the Twin Cities metro area came out to Emagine Willow Creek in Plymouth to watch Marvel's latest superhero film.

"I like seeing how black people are getting a positive image instead of like a negative image all the time," said Jordan Avent, 16, of Brooklyn Center High School. Avent came to the movie with Black Gems, a college and career readiness program.

Kayla Trimble, 17, of Hopkins High School also came with the Black Gems group. She said, "It's frustrating when you only see like the black men or the black women either going to jail, robbing banks, being drug dealers, gangsters, things like that. So it's good to see like an all-black cast and see us being represented as like a superhero, kings, queens, princesses and stuff like that."

The idea started when Ben Quam had been talking to his friend Charles Awad about how he grew up reading comics and watching movies with superheroes that looked like him. "I WAS Luke Skywalker, Batman, Green Lantern, and Iron Man. Part of that came from thinking I'd grow up and become them, because they looked like people in my family. Charles is Persian, and grew up with everyone that looked like him being the 'terrorist' or the villain," Quam said.

Realizing the significance of Black Panther, Quam posted on Facebook--asking if it would be possible to rent a theater and give kids a chance to see the movie for free. Emagine Willow Creek offered to host the event.

"We wanted them to kind of have an experience for the day. Treat them," said Travis Joseph, regional food and events manager for Emagine Entertainment.

Joseph said they provided the tickets, as well as popcorn and drinks, free of charge.

"'Cinema for a Cause' is something we came up with here in Minnesota to do outreach to the community to get kids to come to the theater again," Joseph said.

Many groups and after-school programs came out to Plymouth to watch the movie.

Minnesota Lynx forward Rebekkah Brunson had the same idea as Quam and invited about 35 high schoolers through Minneapolis Urban League and they shared the theater with the other groups.

"I just wanted to share this movie. I think it's extremely important. The characters have been around for about 60 years but you haven't seen them come to the big screen and there's no better time than Black History Month to allow some kids to come out share in the experience and see some heroes in a different type of light," Brunson said.

"For it to be like an all-black cast for a Marvel movie is really important to me because there's not a lot of black blockbusters in Hollywood," Tidwell-Bennett said. "It's good to see strong black people being role models for kids like me because then it makes me feel like I should just grow up and be just like them."

Black Panther continues to break records. It was number one at the box office again this weekend and roared past the $700 million mark in worldwide ticket sales.