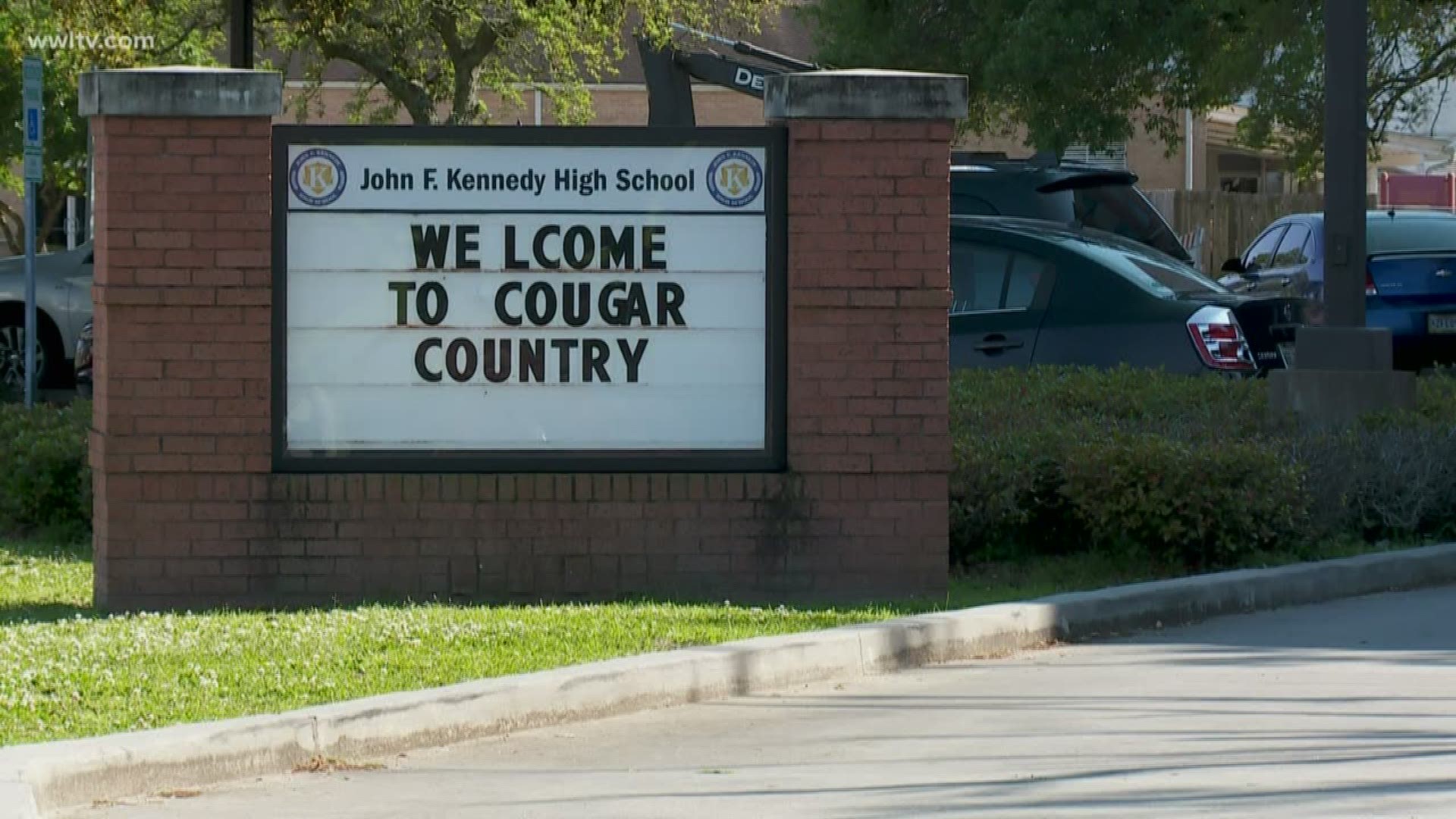 NEW ORLEANS — Law enforcement agencies are looking into the alleged malfeasance and misconduct at Kennedy High School that’s prevented half the 2019 senior class from graduating on time, the chairman of the charter board that runs the school confirmed Tuesday.

Those agencies have asked the New Beginnings Schools Foundation board not to release the findings of a highly anticipated internal investigation, board chairman Raphael Gang said.

“We cannot release the report because there are other agencies involved now that have asked us not to release it,” Gang said in an email responding to a public records request by WWL-TV. “We do not want to obstruct justice by doing so.”

Gang declined to say which agencies were involved and if they have opened any criminal investigations, but he has previously said that an internal investigation has uncovered widespread, systemic malfeasance and misconduct by leaders at Kennedy High and the New Beginnings charter management organization.

The internal investigation is complete and was conducted by the law firm Adams & Reese, which was hired in April in response to reports in March by WWL-TV and the investigative website The Lens detailing allegations of grade-fixing at Kennedy.

The report also delves into WWL-TV’s investigation showing that public board records had been altered, allegedly by New Beginnings CEO Michelle Blouin-Williams, to justify a million-dollar school bus contract that didn’t get proper board approval.

Blouin-Williams was forced to resign in May, after a series of WWL-TV reports and findings of “misconduct” in the internal investigation. But this week, Jefferson Parish Public Schools acknowledged hiring her as a math teacher.

A spokesman for Jefferson Parish schools said Blouin-Williams had served for two decades as a certified math teacher there, she fills “an area of critical need for us” and “we have no reason to believe she’ll be anything but successful again.”

But Gang made it clear last month, as he prepared to release the Adams & Reese report to the public, that the findings went far beyond grade changing and altered board minutes.

“We are committed to ensuring that our families, the public at-large understands what happened here,” Gang said in June. “And as soon as the investigation is completed we are going to make sure that everyone does.

But those plans have now changed, thanks to the involvement of law enforcement and a lawsuit filed earlier this month by the mother of a Kennedy senior who walked in May’s graduation ceremony, only to learn she didn’t actually graduate.

Taylor McClendon is one of 87 Kennedy High seniors who were told they didn’t graduate, one of 69 who actually walked in the graduation ceremony without qualifying for a diploma. The complaint filed by her mother, Darnette Daniels, is against New Beginnings, its management contractor TenSquare, the Orleans Parish School Board and the State Board of Elementary and Secondary Education.

It alleges McClendon followed all instructions to take certain classes using the online software GradPoint, only to find out two days before graduation that her work didn’t count because it wasn’t done in the presence of a certified teacher.

“You're supposed to be in school with a teacher, a certified teacher, to do GradPoint. That was not happening at John F. Kennedy,” Daniels said.

RELATED: Nearly half of 2019 Kennedy High graduates have to take more classes

McClendon told WWL-TV none of the students using GradPoint had ever been advised that a certified teacher had to be present while they took the classes. In fact, she said Kennedy replaced a certified teacher overseeing the “GradPoint room” at the school with a non-certified one after the first semester.

Now, she must re-enroll for her senior year in August to graduate.

The school was plagued by a large number of teachers leaving the school at the end of 2018. One teacher who left after the first semester, Gloria Love, had 17 Fs changed to Ds in her gradebook after she left the school.

Gang said in June that the Adams & Reese investigation found at least eight students had their grades improperly changed. After learning about those grade changes, the board fired five Kennedy school leaders, including the principal and two assistant principals.

The findings in the report were so systemic that the New Beginnings board voted last week to relinquish its charter at Kennedy and another school, Pierre Capdau, at the end of the 2019-2020 school year.

The fired Kennedy principal, Brian Gibson, said he’s never had access to the computerized grading system, never authorized any manual grade changes and has never been told why he was fired. WWL-TV has repeatedly asked Gang for specific allegations against the fired employees. He said that would be disclosed in the report, but now it’s unclear when or if the report will ever be released.

Another board member, Marlo Lacen, said Kennedy was without a counselor for a time, and counselors failed to certify students’ class credits and notify them of any deficiencies.

A counselor who was supposed to perform an audit took leave in December and didn’t complete the work, several school officials told WWL-TV. The station reached out to that counselor Tuesday, but she declined to comment.

A state law, known as the Parents’ Bill of Rights for Public Schools, requires public schools, including charter schools overseen by public boards, to inform parents “if their child’s academic performance is such that it could threaten the child’s ability to be promoted to the next grade level.”

RELATED: 'You were underserved and misled:' OPSB Superintendent apologizes to JFK students

Gang declined to comment on any of the allegations in the lawsuit.

There was some good news Tuesday. Kennedy finished a second summer school session for seniors who needed just a few hours to graduate, and Gang said 53 of the 87 students who were not able to graduate in May have now completed their requirements to get diplomas.

NOTE: An earlier version of this story incorrectly reported a lawsuit against New Beginnings was filed in late June. It was not officially filed until July 1.