Take 'Em Down Nola hosted a press conference when the group made clear demands to elected New Orleans officials, giving them until the end of June to take action. 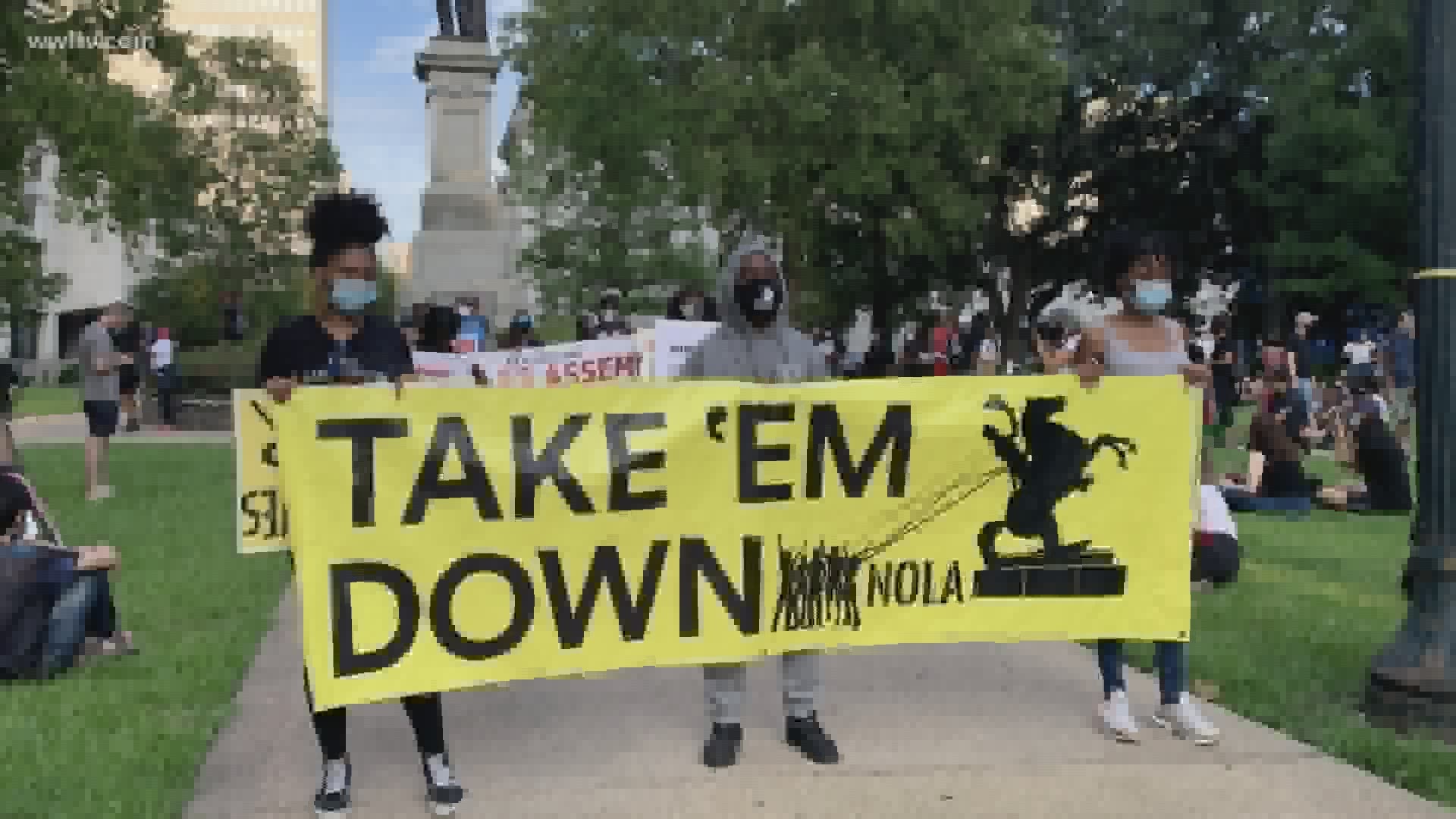 NEW ORLEANS — People gathered in Lafayette Square on Saturday to take part in a protest organized by Take 'Em Down Nola.

"The elected officials of New Orleans are still twiddling their fingers as they form committees to decide on this, and decide on that," a social media post by the organization said. "We don’t need one more committee to host discussions. We need to make the declaration that ALL symbols to white supremacy need to come down, and NOW!"

Take 'Em Down Nola said it hosted a press conference in June in which the group made clear demands to elected New Orleans officials, giving them until the end of June to take action.

"Since other cities have figured out how to take action in one day, in some cases, we are being more than fair," the group said in a Saturday social media post. "Time is running out. The city has three days to take action."

During a June 11 press conference at City Hall, the group made four demands.

The group wants City Hall to expedite the removal of all statues, monuments, honoring racism, hate, exploration and oppression, including names of streets, schools, and parks.

The first demand made during the conference was for a timeline for the immediate removal of all symbols — not only statues. That was reiterated during a social media post about Saturday's protest and march.

"By making a CLEAR decision to NOT compromise with white supremacy and honor it in any form or fashion, New Orleans should be a leader in the removal of images of psychological terror upon Black lives," the group's social media post said. "If elected officials were principled against racism, exploitation and oppression, they would take ACTION NOW!!!"

Take 'Em Down Nola's second demand was for a community-driven process for replacing monuments.

The group said in a social media post that monuments must honor those who fought and sacrificed to help free oppressed people, saying monuments should celebrate liberation not suffering or exploitation.

"Just because you put up an image of a Black person or symbol, does not make it about liberation," the group's post said. "Some images further perpetuate exploitation and oppression, and we must discern between these clearly."

The post also said new monuments should not be images of white supremacists.

"If the white supremacist can look at it and find joy, it's got to go," the group's post said.

Take 'Em Down Nola demands City Hall immediately enact an ordinance to expand the criteria of monuments and symbols being considered for removal. The group wants the criteria to be expanded from confederate monuments to all symbols of white supremacy.

Take 'Em Down Nola demands City Hall use tax dollars budgeted for the New Orleans Police Department to serve the community in a different capacity.

Take 'Em Down Nola, a group of organizers committed to the removal of symbols of white supremacy in New Orleans to help push for racial equality and social justice.

The protest, organized on Facebook and elsewhere, began at 6 p.m. and was scheduled to be held until 9 p.m.

On Facebook, Take 'Em Down Nola told the public participants should be ready for a march after the protest, saying they should rest, eat, drink water beforehand and wear comfortable shoes.

"Have on your mask and be prepared to physical distance," the post said.

RELATED: Someone pulled the John McDonogh statue from the river, but where is it now?