In the speech, he made a bold claim: not just that racism existed, but that America as a whole was a racist country. 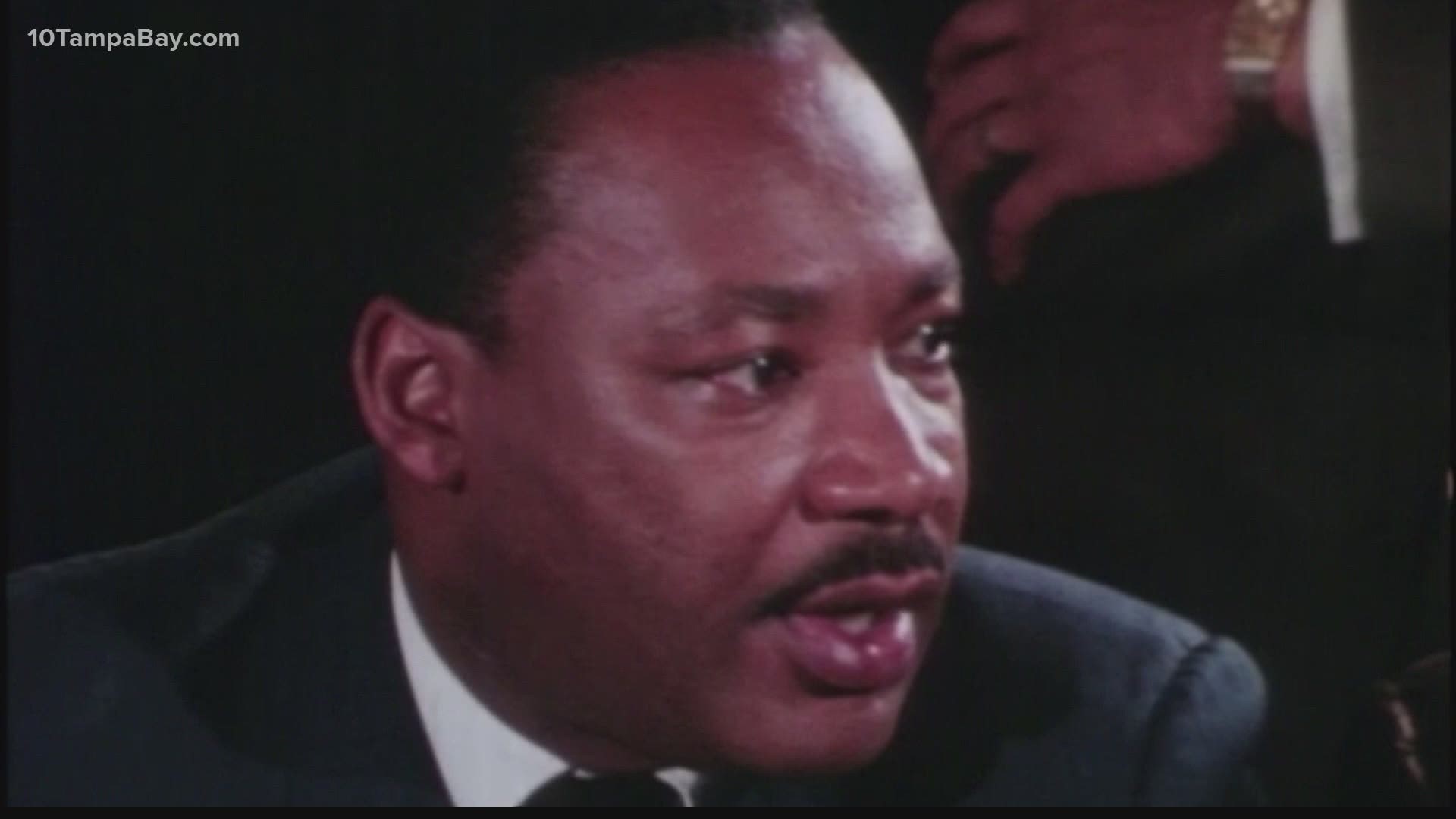 TAMPA, Fla. — Everyone knows "The Dream." In 1963, Dr. Martin Luther King Jr. shared that dream of racial equality in one of the most famous speeches in American history.

But just four years later, he said his dream had morphed into a nightmare.

He spoke of his frustration in a different speech called "The Other America." He gave the speech in both 1967 and 1968 to a variety of audiences. In the speech, he made a bold claim: not just that racism existed, but that America as a whole was a racist country.

“…We must honestly see and admit that racism is still deeply rooted all over America,” he said to a mostly white audience at Stanford University in 1967.

"Every major institution you could point your finger to has been touched by institutional racism,” historian Fred Hearns said.

As King spoke at Stanford, racism, unemployment, segregation, poverty and police brutality plagued the Black community. These forces sparked deadly race riots across the nation. While he condemned violence, he said the riots had a reason.

“I think America must see that riots do not develop out of thin air. Certain conditions continue to exist in our society which must be condemned as vigorously as we condemn riots,” King said.

As protests over racial inequality swept the nation after George Floyd’s death, for many, King’s words still rang true.

“He talks about discrepancies on education, economics, and housing, but he really paints the situation of Blacks in America as one that has been mired with inequality and injustice,” Hillsborough County Schools history teacher Kenneth McElroy said.

By 1967 and 1968, King was at a turning point in his life. He broadened his view of inequality beyond the Jim Crow segregation of the South but faced bitter opposition as he went north.

“There were a lot of white liberals at the time that were with him in the fight against legalized racism, but that a lot of that dropped off whenever they kept trying to push forward to get true equality,” McElroy said.

King said in the speech that most of white America had never made a serious, solid commitment to civil rights.

He wanted America to address the fractures in the foundation of our nation that start at birth, where statistics show Black babies are twice as likely to die as white ones.

Those differences continue in education, where Black children are five times more likely to attend segregated, low-performing schools. They are less likely to graduate--and even with a college degree, often end up earning less. That widens the wealth gap, where white families have 10 times the net worth of Black ones, leaving African Americans less likely to own a home.

These disparities persist to life’s very end, where segregation endured in death. Even today across the country and in the Tampa Bay area, archaeologists are finding hundreds of graves from destroyed Black cemeteries under apartments, businesses and even on school grounds.

"…It might not directly be legalized racism like it was in the past, but there's been systems that have been created. That leads to inequality in many different areas,” McElroy said.

King agreed the Black community should build its own political and economic power, yet he called for programs and laws to root out discrimination.

“Even though it may be true the law cannot make a man love me, it can restrain him from lynching me,” King said.

He also reminded his audience that “no other racial group has been a slave on American soil,” then left without meaningful support after freedom.

“It is a cruel jest to say to a bootless man that he ought to lift himself by his own bootstraps. And the fact is that millions of Negroes, as a result of centuries of denial and neglect, have been left bootless,” King said.

So, for America to live up to her name, King said, “…it is necessary for us to realize more than ever before, that the destinies of the Negro and the white man are tied together.”

In true King fashion, he remained optimistic about the country’s future despite the challenges it faced when it came to race.

"And so I can still sing ‘We Shall Overcome,’” he said. “We shall overcome because the arc of the moral universe is long, but it bends toward justice.”