Some say they've struggled with brown water for years. Others say it all started much more recently. 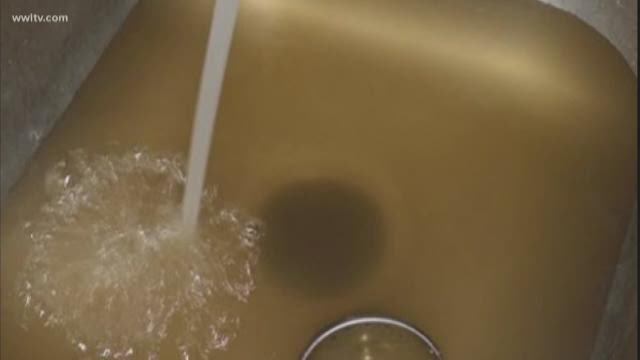 For the past year, Daniel and Taylor Munns mornings have started as a mystery.

"Sometimes the water comes out brown like coffee, sometimes it's a light brown," said Daniel. "Sometimes it's perfectly clear," said Taylor, "It's just the strangest thing."

The couple lives in the Pine Creek subdivision in the Madisonville area, but residents from more than a dozen neighborhoods near the St. Tammany-Tangipahoa parish line, including Guste Island and Villages at Bocage, have sent Eyewitness News pictures and videos of the discolored water coming out of their faucets.

Some say they've struggled with brown water for years. Others say it all started much more recently.

"It's frustrating, like I said we used to live 200 yards away for years and never had any problems and now it seems like it's a re-occurring problem for years," said resident Meg Hackney, "It's just kind of scary not knowing what you're putting in your body and what you're bathing in."

"Why is the water brown? What's causing this? Is it safe to drink? Is it dangerous," asked the Munns.

Eyewitness News brought all of those questions to the state Department of Health's Lead Engineer in the New Orleans area, John Williams.

"It's in the ground, it's in the aquifers where the water is being drawn from," said Williams.

It is manganese, a naturally occurring element found in the air, soil and water. Because the EPA does not consider manganese to pose a health risk, water systems are not required to get rid of it.

But with a majority of Northshore residents getting their water from under the ground, why are some having the problem and others not?

A rendering from the local U.S. Geological Survey office shows what the system of aquifers looks like. It's described as a series of underground rivers, ranging from 200 feet below surface to as much as 3,000 feet down. Some sit between layers of clay, others between sand. There are thousands of wells in the area's aquifers.

"So depending on which one they're drawing from, it's going to have a particular characteristic," said Williams. "Manganese, it can have iron, it can have hydrogen sulfide. At another level, you could have completely different characteristics."

The fact sheet by the U.S.G.S. and the Louisiana Department of Transportation says some aquifers in this area may contain iron or manganese concentrations that exceed the EPA's secondary maximum contaminate levels.

Because of that, some water systems, like Tammany Utilities, flush pipes, starting at the well, every three months. Others, like Tangipahoa Water District, spent more than a million dollars to put an industrial filter on their Bedico area well.

But another question is why some residents are only starting to see the problem now?

But residents have options to control their brown water issues too. Aside from getting a whole-home filtration system, like some have done, residents are encouraged to flush their own water lines every quarter with cold water. It's advised to bump that up to once a week on faucets that are infrequently used like guest bathroom tubs. If you're seeing the brown water when using hot water, it's suggested to drain and clean your hot water heater. And when you're gone on vacation, run all your faucets upon return. And when you get brown water, report it directly and immediately to your service provider, not just social media.

For many residents, they say knowing about their water source quirks helps, but they still expect to get clean, safe water.

"I want to see it fixed," said Hackney, "I want to be able to go to sleep knowing that when I wake up to take care of my kids that I'm not gonna put them in dirty water or unhealthy water."

Many say the days of sitting silently waiting for that to happen are coming to an end.

Last legislative session, lawmakers passed a bill requiring the Department of Health to start evaluating each water utility system across the state, and present its finding to the Legislature.

The author of that bill has filed new legislation this session, which began yesterday, that calls for water companies to provide quality status reports on their systems and repair plans for any issues identified in those reports.

More links on this topic are below: