Bunny Matthews, cartoonist & creator of Vic and Nat’ly, dies at 70

A self-taught artist, Matthews created the fictional New Orleans Yat couple for The Times-Picayune 40 years ago and was also a talented music & feature writer. 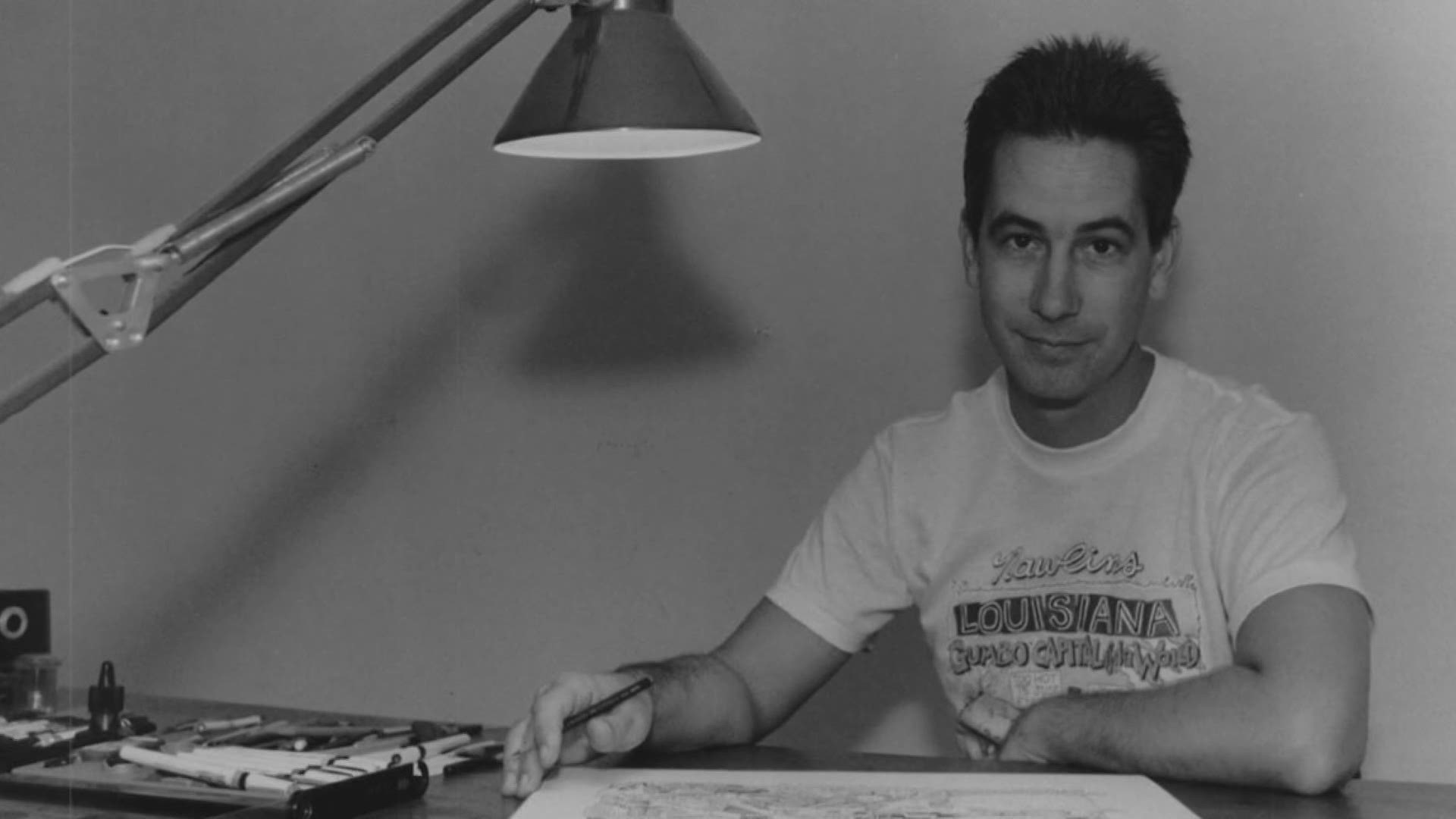 NEW ORLEANS — Bunny Matthews, the prolific New Orleans cartoonist and writer whose iconic Vic and Nat’ly characters illustrated the dialects and quirks of the city’s people for more than 40 years, died Tuesday of complications from cancer. He was 70.

His death was first reported by The Times-Picayune/New Orleans Advocate.

Matthews was diagnosed with a form of brain cancer in 2015. Complications from surgery to remove a tumor in his skull left him with a stroke-like paralysis. He recovered and his cancer went into remission but he suffered more setbacks. His wife Debbie was diagnosed with an aggressive glioblastoma in 2017 and died the following year. When Matthews’ disease returned soon after, his son Jude said, Matthews opted not to seek further treatment and entered hospice care.

Although his body of work encompassed thousands of pieces of art, Matthews is best known for the characters of Vic and Nat’ly Broussard. A self-taught artist, he created the fictional New Orleans couple in 1982 for a cartoon series in The Times-Picayune’s Sunday magazine, Dixie.

"Even more than funny, I want to make it real. And to me, Vic and Nat'ly are really like the New Orleans that I always loved,” Matthews said in a 1992 Times-Picayune article. “It may even be nostalgic, people's idea of the New Orleans they remember. A hundred years from now, I'd like people to look at these drawings and say, 'That's the way New Orleans was.'"

Matthews prided himself on the characters’ authentic – though exaggerated – accents which he said reflected the way many New Orleanians really spoke.

“If I can accomplish anything, I want people to know that people in New Orleans are not like southern belles, they're not like Mississippi, not like Cajun or southwest Louisiana,” he said in a 1989 WWL-TV interview.

Matthews made the setting for the cartoons a neighborhood bar where the distinct patois of the title characters, their customers and friends was ever-present.

“I wanted a barroom, po-boy place, because that way people from all walks of life – Black, white, poor, rich, whatever – could come in and out of this place. And you could have conversations and it would be real,” he told WWL-TV anchor Angela Hill in 1989.

In the interview, Hill asked Matthews to describe the two main characters.

Credit: WYES-TV
Vic and Nat'ly as drawn by Bunny Matthews for WYES-TV.

“It's terrible for him to smoke cigarettes and drink beer and all that stuff. But that's the reality,” Matthews said. “You know, people are like that in the world.”

After his health ordeal, however, Matthews did extinguish Vic’s cigarettes.

“Cigarettes are nice little props — it was cool to draw them with Vic,” he told The Times-Picayune in 2016. “But it’s not really right. I see no reason to give more publicity to that. I’ll never draw cigarettes again.”

Over the years, Matthews’ Vic and Nat’ly cartoons and his distinctive drawing style appeared in nearly every publication in town. In addition to The Times-Picayune (where they moved from Dixie to the TV Focus Sunday supplement), they were featured in Gambit, OffBeat and New Orleans Magazine. They also appeared in the now-defunct Wavelength music magazine and Figaro, the former weekly newspaper where Matthews began his cartooning career in the 1970s.

Vic and Nat’ly were also featured on Mardi Gras parade floats, came to life on television for WYES-TV’s weekly show “Steppin’ Out,” and were showcased at the 1984 World’s Fair. In 1989, actors portrayed the couple in a “human exhibit” at the Audubon Zoo.

For its 100th anniversary in 1996, Leidenheimer Baking Company emblazoned its delivery trucks with a cartoon of Vic and Nat’ly, encouraging customers to “Sink ya teeth into a piece of New Orleans cultcha – a Leidenheimer po-boy!”

The characters also graced T-shirts, calendars, refrigerator magnets and coffee mugs sold at D.H. Holmes department stores. There was a Vic and Nat’ly restaurant in Covington (featuring Matthews’ illustrations on the walls and the menus) and the couple helped sell Barq’s root beer and advertise Liuzza’s restaurant.

In addition to Vic and Nat’ly, their chihuahua Tootsie made frequent appearances in the cartoons, giving pithy and sometimes snide observations (like a cartoon court jester) while sitting inside a coffee cup. A talking cockroach (Rex da Roach) was also often seen, along with the Broussards’ grandson “Li’l Arthuh.”

More than a cartoonist, Matthews was also a keen cultural observer, satirist, historian and – as one colleague put it – provocateur.

He was also a music critic and writer whose work (an article entitled “The Sound of New Orleans from A to Z”) appeared in the first issue of OffBeat in 1988. He later served as the music magazine’s editor from 1999 to 2005.

Will Bunn Matthews III was born in Monroe, Louisiana, and moved to Metairie with his family when he was three. Bunn was a family name which led to his lifelong nickname.

Matthews said he had an early interest in art and was a frequent doodler but was reluctant to pursue drawing as a career.

“My father was kind of a frustrated artist and that made a big impression on me, I think, because he gave it up to become an insurance man and support his family,” he said in 1989. “That kind of floors me now to think about it, because, to me, to stop drawing is like to stop breathing, I don't see how you can give it up. But he did. “

After graduating from East Jefferson High School, where he was editor of the school newspaper, Matthews enrolled at the University of New Orleans. But he quit college and worked as a janitor.

He also worked at the legendary Jim Russell Records store on Magazine Street, where he met and befriended music legends Earl King, Allen Toussaint, Professor Longhair, Eddie Bo and James Booker. Later, many of those music greats turned up in his work. He later welcomed some of them, and other musicians – including music great Ernie K-Doe – onto the set of the cable access TV show he hosted in the 1980s.

In 1974, Matthews began writing about music for the weekly newspaper Figaro. Since the Times-Picayune didn’t have a writer covering modern music, his stories about local performers became an important chronicle of the music scene.

His reviews also showcased his biting wit and sarcastic style – not always appreciated by his subjects.

In the Dec. 3, 1975 issue of Figaro, local photographer Sidney Smith wrote the following letter to the editor: “In response to Bunny Matthews’ distasteful coverage of myself and the Who concert and party, I have the following to say: A review is indeed one man’s opinion only. Thank God there is only one Bunny Matthews.”

The result was the comic strip series “F’Sure: Actual Dialogue Heard on the Streets of New Orleans.”

“The very first (comic) strip, I went to the Jazz Festival and it was just about…the inane things people say. But everything people say is funny, I think, to listen to,” Matthews said.

In 1982, his work for Figaro led to a call from The Times-Picayune – specifically the new editor of Dixie, the paper’s revamped Sunday magazine. Editor Jeannette Hardy asked him to come up with an idea for a weekly cartoon and soon Vic and Nat’ly were born.

In a 1983 book of Matthews’ cartoons, Hardy described the first time she saw the characters.

“There was Vic, with that greasy hair, that 5 o’clock shadow and that nasty cigarette stuck in his mouth,” she wrote. “And there was Nat’ly with those pointy eyeglasses, that 1930s print dress and that mad, upswept hairdo. They looked like creatures spawned in a swamp and seasoned with 50 years’ worth of fried oysters, hot sauce and pickled eggs.”

In a 2002 Gambit profile, Matthews said he wanted a two-name title for the cartoon series, to reflect his love for New Orleans cornerstones such as F&M Patio Bar, Rocky & Carlo’s and Clarence & Lefty’s.

He decided on a male and female couple, with the man modeled after former New Orleans mayor Vic Schiro.

“I always thought Schiro was really a fantastic person, because he started out being a bit actor in B movies in Hollywood and someone suggested he run for office and I don’t even think he was registered to vote,” Matthews said. “And the hairline mustache, that’s a Vic Schiro thing. I always admired people who could leave that one little strip of hair right around their lips.”

For Nat’ly, Matthews used exaggerated female symbols, including her towering hair, outrageous earrings and eyeglasses. “She was very fat and obese when I started it and eventually I had the idea of making Nat’ly into a bombshell…because I thought, if I have to draw this picture for the rest of my life I want it to be attractive and good-looking.”

The cartoons were an instant hit, though there were detractors who criticized Matthews for mocking the city and its people.

“I don't try to make fun of people. I'm one of these people,” he told WWL-TV. “I know that from all these years going out and signing autographs at bookstores and all that kind of stuff, I've never had one person ever complain to me. The people who have really strong accents are the ones who love it the most.”

Matthews’ drawings were purchased by collectors and were the subject of several books. His work was exhibited at the New Orleans Museum of Art, the Contemporary Arts Center and Arthur Roger Gallery, which mounted a 2014 show entitled “The People of New Orleans.” For it, Matthews drew a New Orleans character for each letter of the alphabet.

The Ogden Museum of Southern Art houses his wall-size “Nint’Wardica,” a variation on Pablo Picasso’s “Guernica.” Matthews’ work was inspired by the BP oil disaster in the Gulf of Mexico.

“You have to find a funny side to bring people out of their misery,” he once said. “You have to see humor in New Orleans. It's a disaster, really, the city, but it's funny, you know. Nothing about it works or anything, but you have to laugh at it. If you don’t have a sense of humor, you couldn’t live here.”

Matthews, who since 1988 was a resident of Abita Springs, was honored with a 2016 President's Arts Award by St. Tammany Parish government. He earned awards for writing and cartooning from the Press Club of New Orleans and reigned as king of Krewe du Vieux in 2017.

“I would never live anywhere else in America,” Matthews said of New Orleans. “Everybody else is strange to me in the rest of the country, their values and the morals and what they think is important.”

In addition to his son Jude, Matthews is survived by a son, Noah Matthews.