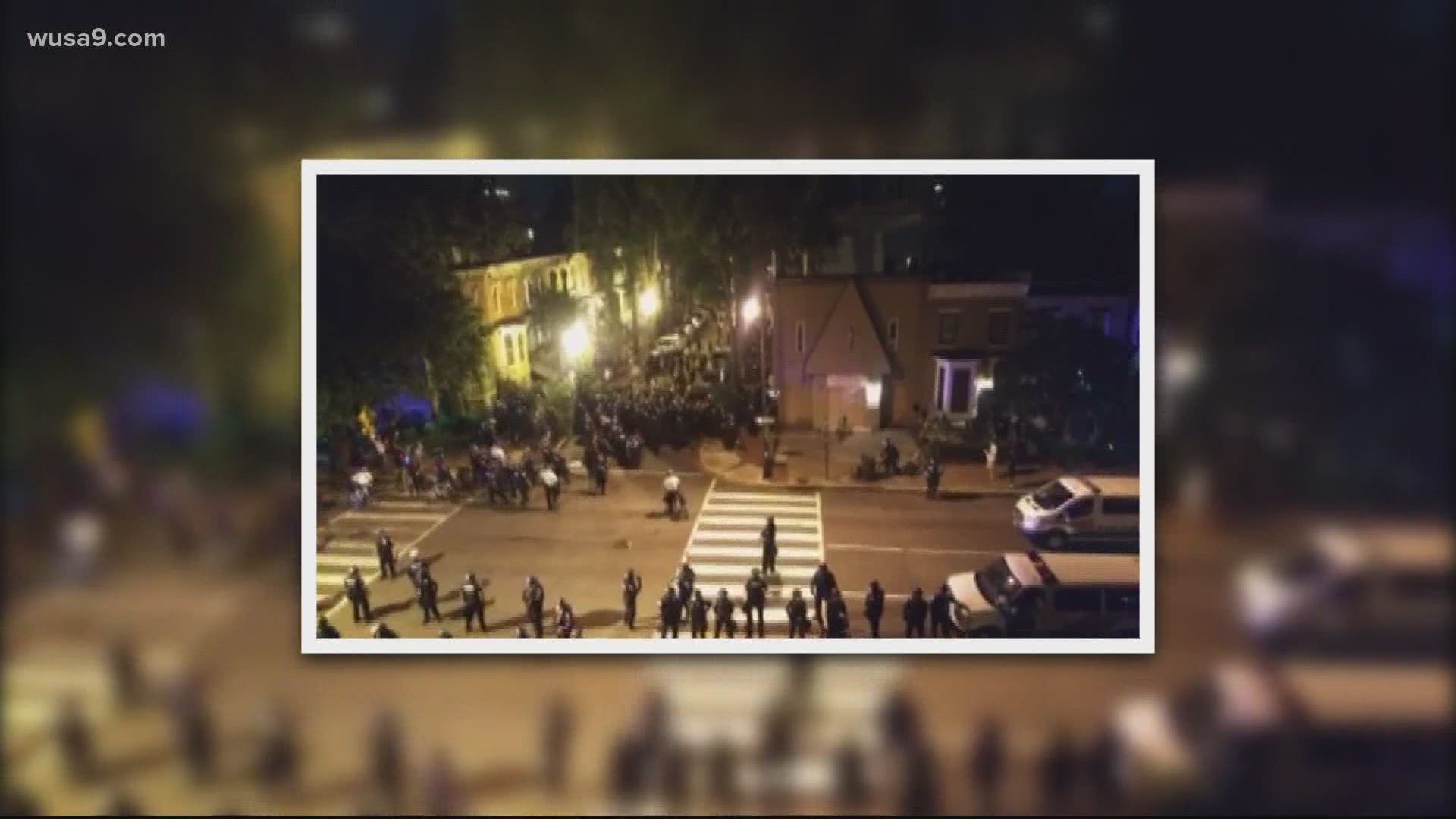 WASHINGTON — D.C. Mayor Muriel Bowser asked President Donald Trump on Thursday to remove all extraordinary federal law enforcement and military from the city, specifically highlighting the unmarked federal officers who had been present since Wednesday.

In a letter to the president, Bowser said the District’s curfew and state of emergency related to demonstrations had expired. She noted that DC Police did not make a single protest-related arrest Wednesday night.

District residents and media began to notice unmarked federal law enforcement officers manning perimeters near the White House early Wednesday morning. These officers, who were equipped with riot control gear, but no nameplates or other identifying marks, refused to say what agency they were with.

In response to questions from WUSA9, CBS News and others, the Bureau of Prisons eventually acknowledged that these officers were BOP crisis management teams.

RELATED: Unmarked, armed riot officers seen around D.C. won't say what agency they are from

In her letter, Bowser asked that these unmarked officers be removed from D.C. streets.

“I continue to be concerned that unidentified federal personnel patrolling the streets of Washington, DC, post both safety and national security risks,” Bowser wrote. “The deployment of federal law enforcement personnel and equipment are inflaming demonstrators and adding to the grievances of those who, by and large, are peacefully protesting for change and for reforms to the racist and broken systems that are killing black Americans.”

Bowser noted that these unmarked officers have been operating “outside of established chains of command,” and that their presence in the city could cause “dangerous confusion.” The mayor also noted that identifying insignia is mandatory for D.C. police officers.

In response to a tweet from Utah Sen. Mike Lee (R) claiming she was "kicking the Utah National Guard out of all D.C. hotels," Bowser also said Friday the District won’t pay the hotel bills for the National Guard troops who have been stationed in the city.

But, she said, D.C. wasn't kicking the Guard units out of any hotels.

“At no time did we intend, or would we be able to effect, evicting any guardsmen from a hotel. We do, however, have an agreement with one of our hotels for our COVID response, for which the District has paid and has a contractual arrangement," Bowser said. "So our deal with the hotel was, if they’re going to use the rooms we’ve reserved, then you have to refund us our money. That, we understood, would just be a matter of the Guard, or the Army, making those arrangements."

Bowser said D.C. works with federal partners and National Guard units from other states on major issues all the time, but that this situation was different, because their presence was ordered by the president and didn't come at the District's request.

In response to her letter, President Donald Trump tweeted Friday that Bowser was "incompetent," and threatened to send even more unspecified federal troops to the city.

Bowser, asked Friday about the president calling her incompetent, offered a short response: "You know the thing about the pot and the kettle?"

Unrelated to Bowser’s letter, there had already been confusion about whether active-duty troops stationed outside of the District were beginning to leave the area or not. Some 1,300 Army personnel had been moved to military bases just outside the city in case the president decided to invoke the Insurrection Act, but following the calm Wednesday night in D.C., Department of Defense officials had said they were preparing to leave.

After a meeting with Trump – who was reportedly unhappy with his opposition to invoking the Insurrection Act – Secretary of Defense Mark Esper overruled that decision, though, and kept the troops in the area on standby. It was not immediately clear Friday whether that situation had changed.