NEW ORLEANS — We're taking you to a place in New Orleans very few people have ever been or seen.  We're heading underground, into one of the city's subsurface canals.

They're crucial to preventing the city from flooding, but as we saw this summer after major flood events, parts of the canal system have been clogged with debris -- including a car.

To get more perspective on what we're dealing with when it comes to these canals, we got exclusive access.

This assignment calls for good ole shrimp boots.  We're going into an underground drainage canal.  Our guide will be David Capell.  He’s a principal engineer with the Sewerage and Water Board.

Since the multiple rain events that flooded many neighborhoods in New Orleans, the Sewerage and Water Board has been doing what it can to inspect the canal system.  It's trying to figure out if anything under the surface is worsening the flooding in parts of the city that historically didn't take on that much water.

Capell has inspected several of the underground canals in recent months.  He took us down a manhole to give us a better idea of what's below, and how it may factor into the flooding we've seen.

The canal we’ll be descending into is located on Saint Louis Street, near the Lafitte Greenway.  Capell wore a device to monitor the air for us.  Before we enter the manhole, safety manager Craig Williams assured us he’d be ready to help if needed.

"Dave has a radio.  Anything that goes wrong, he knows to give me a call, and we got a rescue crew to work with you guys,” Williams said.

After signing some paperwork, photographer Steve Wolfram and myself go down into the manhole. Once in the canal, we're in a completely different world.

Using a special low light camera, we do our best to explore this part of the city's drainage network.  After seeing a wall of roaches, we found out quickly we're not alone down here.

"It's a good sign, it means we have oxygen," Capell said.

There are roughly 180 miles worth of canals in New Orleans.  Half of that is above the streets, the open canals you get to see.  The other half consists of subsurface canals.

The Saint Louis canal runs from Basin Street to Pump Station No. 2 at Broad Street.  We started heading in the direction of the pump station when Steve slips while carrying his camera.  Luckily, Steve didn't get hurt.  After getting some nasty water out of Steve's boots, we kept walking toward the curve leading to the pump station.  Along the way, we see a piece of concrete in the canal water.

"That's probably part of the concrete that's encases the wide flange beam that's fallen down.  It's got pushed along a bit.  I don't see where it's coming from, but it doesn't look like it's heaved up from the bottom,” Capell said.

Capell says a small chunk of the protective concrete falling off is not a big concern.  We see a larger piece on the more elevated part of the canal.  It’s something inspectors may have to revisit.

“Here you have the rod, the reinforcing rod for the concrete cover for this beam.  This is a good example of something we need to look at in the future," Capell said.

From Capell's perspective, The Saint Louis Canal is as sturdy as it is impressive.

“It is solid. The way it's held up is remarkable. You can see the brick work is still good. At the base of these walls, the brick work is six feet thick and then it tapers up and then these beams rest on top of those supports.  They're filled in with this beautiful brick work that you'd never see today.  But when you consider how old this is, it's in relatively good condition," Capell said.

The condition of the canals is not Capell's mission when he's down here though.  His focus is to pinpoint debris.

Not surprisingly, Capell has found a good amount of Mardi Gras beads in his previous inspections.  The St. Louis Canal does move water from the French Quarter, which would explain the presence of beads in the canal.  On our tour, the beads we saw were few and far between.  The same could be said for the canal inspections in New Orleans. We asked Capell when he thinks the St. Louis Canal was inspected.

During the editing of the story we reviewed the video of that drawing.  That drawing actually had a date of 1979, but if we assume this canal was inspected in 1997, that would mean it's been 22 years since the last inspection.

RELATED: DPW has only inspected a fraction of New Orleans' 8 million feet of drain lines 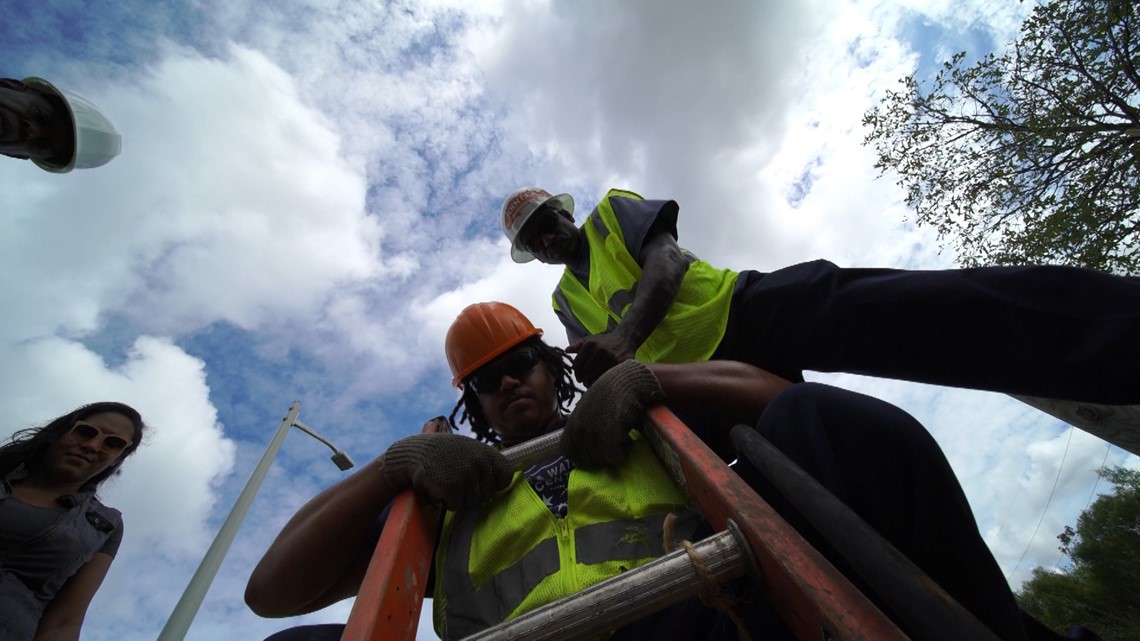 At this point in our canal tour, we didn’t see a ton of a debris.  The canals under the streets, don't get too clogged, at least according to the inspections that have been done.  That’s mainly due to the “V” shape canal.  Much of the canal funnels the water to Pump Station No. 2.  The shape of the canal keeps much of the debris moving.  We saw a consistent flow of water moving.  The water in the canal is murky, was still moving, which is the name of the game as far as the sewerage and board is concerned.

“I inspected this entire canal from here to basin street and it is relatively clean, much like you see.  There might be a little pocket of debris now and then, but not that much,” Capell said. “The ‘V’ shape allows for self-cleaning of the canal itself, because it gets turbulent flow, and it lifts up the particles and it flows down to the suction bay where it's sucked up and pushed on.”

These underground canals don't have the same potential to get clogged like the open canal where crews pulled a car from this summer.

In part two of this series, we'll examine the tons of debris still in the canals and the biggest hurdle in getting them cleared.  For now, we're heading above ground, for some fresh air.