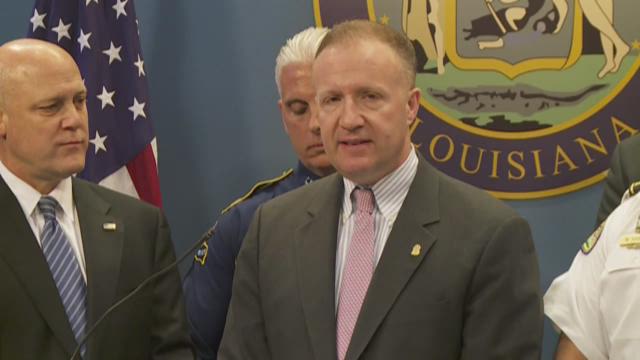 NEW ORLEANS -- This Mardi Gras season set a new tone for counter-terrorism measures, from a more militarized police presence outside the French Quarter to tourniquets and first-aid training for float riders.

The man driving that change is FBI Special Agent in Charge Jeff Sallet, who spoke exclusively about it with WWL-TV.

The first public display of this shift came in January, when Mayor Mitch Landrieu announced a $40 million plan to upgrade security in crime hotspots around New Orleans. Sallet joined Landrieu and Gov. John Bel Edwards at the press conference Jan. 25 as the politicians homed in on violent crime. But the local FBI director was mostly focused on the aspects of the plan that would help protect against a future terror attack.

He said the plan had “three very critical things when it comes to national security: Video footage, increased lighting and… turning the Bourbon Street area into a pedestrian mall,” he said.

Sallet knows counter-terrorism better than most FBI agents. He started that journey when he was stationed at the New York field office, just blocks from the World Trade Center on Sept. 11, 2001.

“I, with a group of FBI special agents -- and there were a lot of us -- walked down toward the towers, and I ended up being on the corner of Church and Vessey streets when the South Tower began to fall,” he said.

For the next several years, he worked in the FBI’s counter-terrorism, Cosa Nostra organized crime and public corruption units. But combating terrorism became very personal for Sallet on April 15, 2013, as he headed into the home stretch as a runner in the Boston Marathon. He found the race course blocked and mass confusion. He had his cell phone on him and texted the FBI command center and his wife.

“I got a text message back from my wife at approximately 3:03 that said, ‘The girls and I saw the bombs. We’re safe. We’re in the Copley Mall.’ My wife and children had been waiting for me in the stands on the other side of the street where the bombing had occurred,” he said.

And that’s when his – and the average American’s -- perspective on terrorism truly changed. The threats became more haphazard, and the incidents started happening more frequently and in less iconic places.

“So you’re seeing a change in dynamic,” Sallet said. “The incidents are occurring in cities throughout America. San Bernadino; did anybody anticipate that San Bernadino would be the target when you have Los Angeles right there?”

When he took over the New Orleans FBI office in late 2015, he brought that perspective to bear by working with local partners to develop new counter-terrorism measures.

“You saw NOPD during Mardi Gras in full tactical gear with assault rifles out in front of the French Quarter,” he said. “Well, that’s not to intimidate American citizens and visitors, it’s to provide a level of comfort to deter bad actors from coming in.”

He said the city’s plan to add high-definition cameras and better lighting improves detection and deterrence. However, he said, everyone needs to join the fight to stop attacks before they happen, especially with lone-wolf domestic attackers.

“With radicalization that occurs here or people who have hatred and then act on that hatred, whether it’s terrorism or a mass act of violence, when (others) see something that’s out of character or out of context, (they need to) report it,” he said.

The third prong of counter-terrorism, he said, is having a response ready to go. This year, that meant the FBI coordinated with local and state law enforcement and NBA league security to prepare for different attack scenarios for the NBA All-Star Weekend.

It also meant special preparations for Mardi Gras krewes, including medical-grade tourniquets placed on each float in parades like Rex, Sallet said.

John Casbon, a business executive who founded the New Orleans Police and Justice Foundation, worked with various krewes to get the tourniquets and set up training by emergency medical personnel.

“There’s been no actual threat here, but it’s time to take it and ratchet it up to another level and that’s what Jeff did,” Casbon said.

When a truck crashed into the crowd at the Endymion parade the Saturday before Mardi Gras, people initially were concerned that it could have been a terror attack. That turned out not to be the case as police arrested the driver, 25-year-old Louisiana native Nielson Rizzuto, and measured his blood alcohol level at nearly three times the legal limit.

He praised the New Orleans Police Department and EMS for their efficient and rapid response to clear the chaotic scene and get many of the more than two dozen injured to hospitals. Still, Sallet said the FBI was in place and ready if it had been an attack.

“We are part of the team here, and we had assets on standby during Endymion, and we immediately called in and said, ‘We are prepared. What do you need?’” he said.