St. Tammany Parish firefighters demonstrated Saturday some of the pitfalls to avoid when frying a turkey. 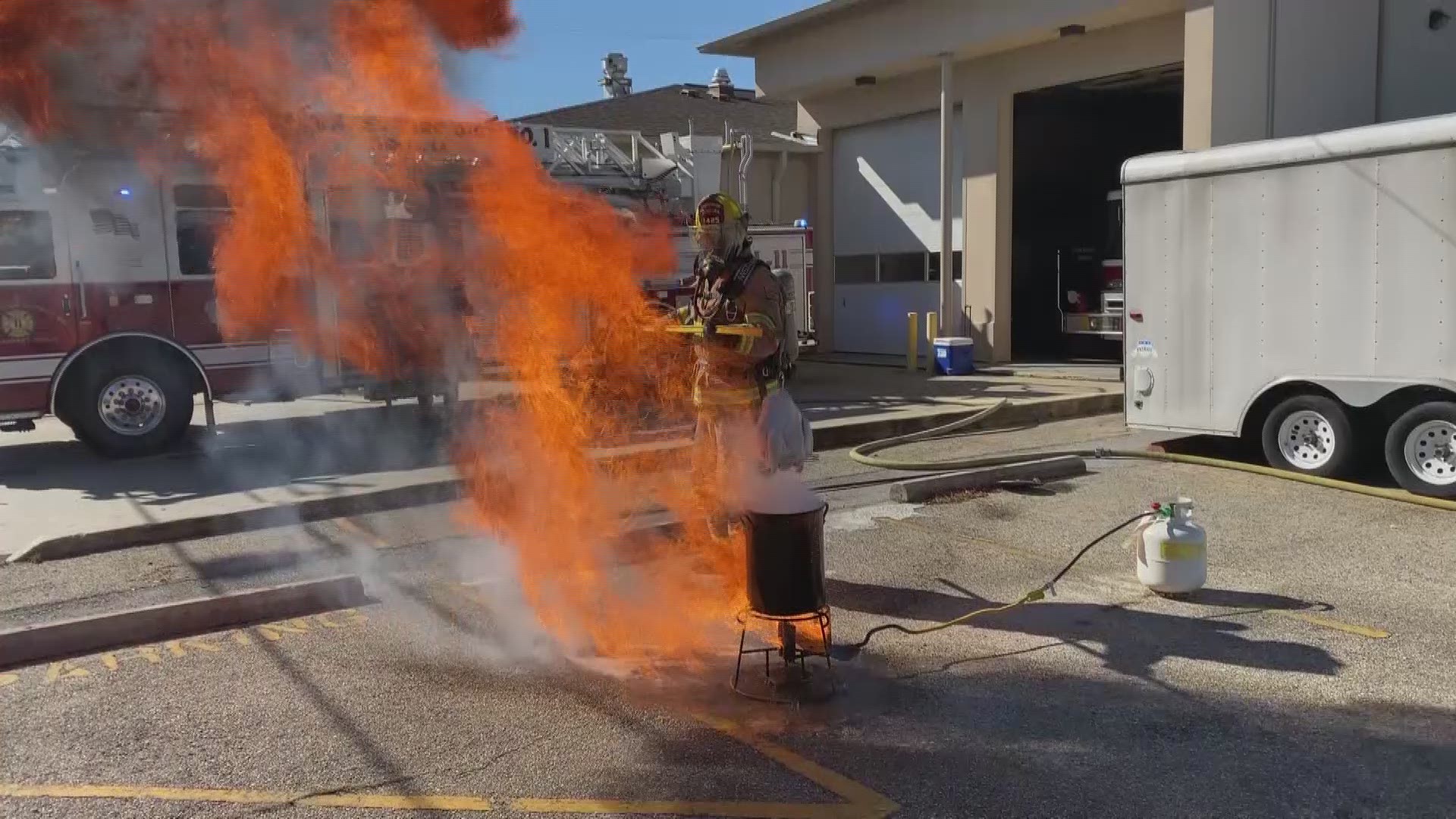 NEW ORLEANS — A column of flames erupted from a turkey fryer in Slidell on Saturday, radiating waves of heat towards the people watching. But firefighters were already on scene because the fireball was part of a planned demonstration by the St. Tammany Fire Department.

In a parking lot outside the Central Fire Station, firefighter T.J. McMillan lowered a frozen turkey into the fryer, and flamed erupted as excess oil boiled out of the pot and ignited.

McMillan and the other firefighters were demonstrating how quickly an improperly prepared turkey could turn a holiday meal into a disaster.

"Lord knows it's absolutely delicious," Gaubert said. "By deep frying (your turkey), you get all those juices and spices, and it holds in that turkey. It stays tender."

But people need to understand how to do it safely.

Most people who fry their turkeys do it properly, Gaubert said. The annual turkey frying demonstration is both a warning for people who have never fried a turkey and a reminder for longtime cooks.

"We want to show the dangers if you do it improperly," Gaubert said. "First and foremost, you need to make sure your turkey is totally defrosted."

"Look at the size of your turkey, and see how much time you need to totally defrost it," the assistant fire chief said.

Gaubert told reporters that about 2,100 house fires were reported on Thanksgiving day in 2011, 2012 and 2013. The National Fire Protection Association and the United States Fire Administration estimate those fires killed 10 people and hurt 50 during each of those years.

That's why experts say to never deep-fry a turkey indoors or under a porch ceiling, and never leave the fryer unattended. Not having the right amount of cooking oil is also dangerous.

"You definitely don't want to overfill your pot with cooking oil," Gaubert said. "You need just enough oil to cover the top of that turkey."

One way to do that is to put the turkey in the pot and fill it with enough water to submerge the bird entirely. Remove the turkey without spilling any water, and mark the pot where the water reaches.

"Then you know exactly where your cooking oil needs to be," Gaubert said.

An overfilled pot will cause cooking oil to spill, and even a small amount of oil will cause a large fire if it gets to the fryer flames.

Cook with a thermometer, the NFPA and the USFA said. If heated over 350 degrees, oil becomes combustible, igniting oil vapors leaving the pot.

People should set up their fryer on a stable and non-flammable surface, and they should have an ABC fire extinguisher ready.

"Never ever put a cooking fire — grease fire — out with water," Gaubert said. "It'll cause it to spread."

The most important thing to Gaubert was keeping people safe, so if a fire starts while frying a turkey then call 9-1-1.

ALSO: 'Exactly how I treat my sons' - Orgeron talks coaching, road to LSU in ESPN interview