Development will rise at site of former Woolworth's location 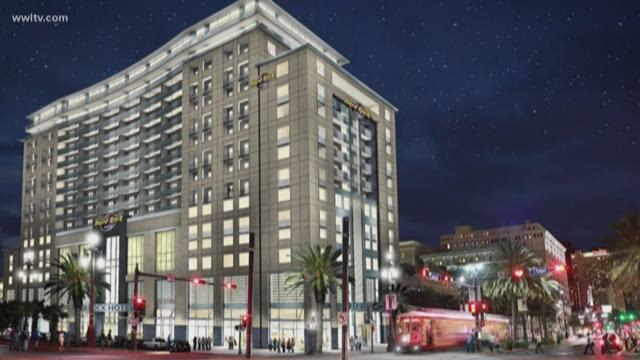 NEW ORLEANS -- A vacant corner on the edge of the French Quarter could soon get new life as a sleek, modern hotel.

Plans call for the corner of Canal and North Rampart streets to become an 18-story Hard Rock Hotel. It is slated to open in spring 2019. The hotel will have 350 rooms, and there will also be 62 one-, two- and three-bedroom condominiums.

The corner for decades was home to a Woolworth’s. The store, which was the site of lunch counter sit-ins during the civil rights movement, closed years ago, and the building remained vacant until it was demolished in 2014.

Plans to build a new structure on the site had been in the works since at least 2007, when developer Mohan Kailas bought the building for $3.6 million after plans for another redevelopment project fell through.

That project came to a halt in 2013 when Praveen Kailas pleaded guilty to fraudulently billing a state Katrina recovery program.

Kailas Cos. remains a partner in the Hard Rock project. Crews recently began work at the corner.

Prior iterations of the project raised concerns that the building’s modern appearance would clash with the French Quarter, while others argued it would not pay enough respect to the site’s ties to the civil rights movement.