In a matter of months, it was a complete transformation from a healthy man with no history of major health issues to almost losing his life. 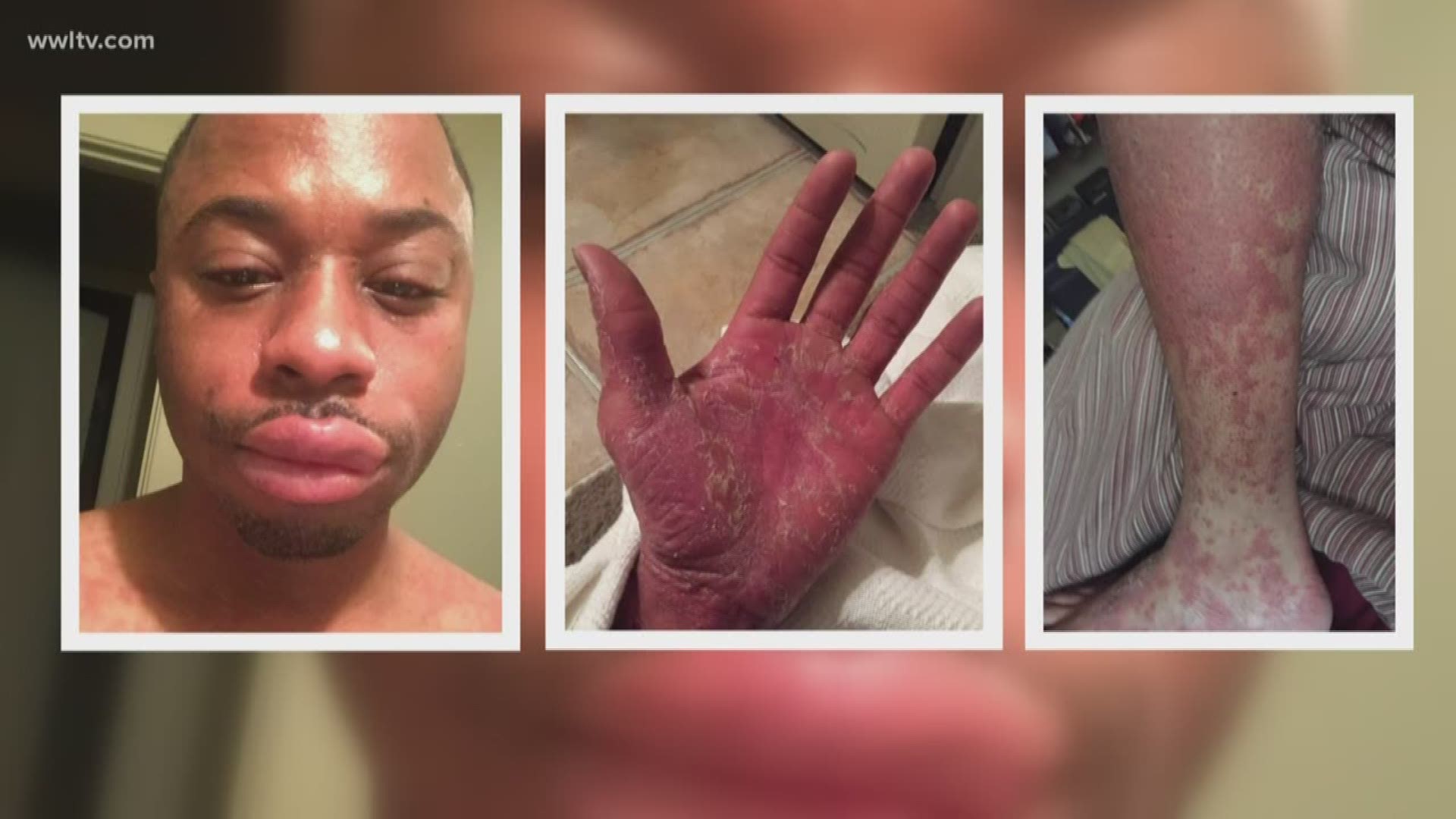 NEW ORLEANS — Social media has a way of connecting us to familiar faces of old friends and colleagues.

When WWL-TV Evening Anchor Charisse Gibson scrolled on an Instagram post, she was connected to a name that was familiar to her, but she didn’t recognize the face. She learned Kirt Thibodaux had suffered from a severe drug reaction known as D.R.E.S.S. Syndrome after taking an antibiotic. The reaction nearly cost him his life.

Kirt went to the dermatologist to treat ingrown hairs as he attempted to grow a full beard. He says a dermatologist prescribed him Minocycline and Epiduo, two drugs prescribed to acne patients daily. Just two days into taking the antibiotic, he says he felt a severe pain in the back of his eyes. From there, a snowball effect of symptoms began.

“That was the first thing,” says Thibodaux. “If I were to lay in bed and just get up — there were pieces, like flurries.”

He’s talking about his skin, which he says started to flake off and trickle down like nothing. He says he noticed a change in his face — bumps, flaking and peeling. His skin felt like it was on fire, he was being ravaged from the inside out.

“I was terrified, I felt helpless. I don’t know what was going on,” he says.

After his mother witnessed his symptoms firsthand, she rushed him to the emergency room. What the doctor said to him next was chilling.

“He was like, 'if you had not come in when you came in, you probably wouldn’t have been here'”

It would be months before doctors properly diagnosed Thibodaux with D.R.E.S.S. Syndrome.

“D.R.E.S.S. is an acronym that stands for Drug Rash Eosinophilia and Systemic Symptom,” says Dr. Erin Boh, Md. PhD Chair of the Department of Dermatology and Professor of Dermatology at Tulane University Health.

“D.R.E.S.S. is very, very uncommon and we see it with a whole spectrum of medication, so antibiotic, anti-psychotic drugs, anti-inflammatory medicine. Even over-the-counter medications like Ibuprofen, which is super common and people take all the time," Boh says.

It isn’t caused by any one antibiotic or medication. There are multiple everyday medications we take that could trigger D.R.E.S.S., and any one of us could be susceptible.

Boh says there is no real way to test to learn if you’re at risk for D.R.E.S.S. and doctors don’t know the exact cause of it in terms of genetic make-up.

“When you get D.R.E.S.S. the big important thing is you stop the drug but if you stop the drug in this type of syndrome, you will still have damage. It’s not the drug per-say, it’s what the metabolites of that drug do. It causes the immune system to stop working as well as it should.”

Kirt had only been taking Minocycline for one month, that was May of 2017.
But he described the remainder of that year as hell.

His hair began to fall out, along with his eyebrows and eyelashes. His finger nails started to fall out. His liver was failing and so were his kidneys.

In a matter of months, it was a complete transformation from a healthy man with no history of major health issues to almost losing his life, and becoming barely recognizable.

After taking a year hiatus, Kirt re-emerged to share his story of the rare symptom that almost took his life with the help of friends and family.

He jokes that family and friends now call him Kirt 2.0, finding the humor after a diagnosis that nearly took his life.

Boh says there are a few symptoms you should look out for if you suspect you may have D.R.E.S.S. If you take any medication you need to pay attention to signs of: itch, hives, swollen lips, redness and tenderness in the skin. You should immediately stop taking the medication and call your doctor.