"It's like a third-world country. It's nasty," Ibieta said. 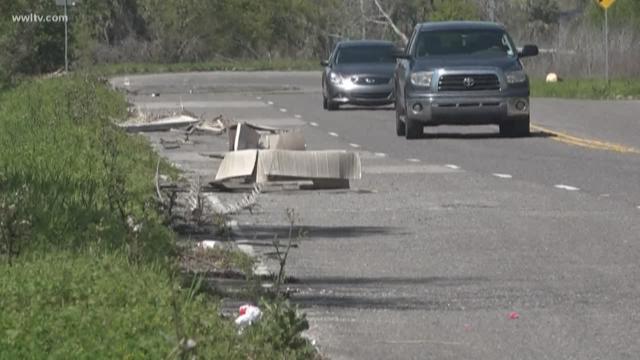 It's a problem Eyewitness News began highlighting nearly two months ago. Residents say the illegal dumping in New Orleans East is out of control, especially on the I-10 Service Road. Now the issue could be even worse than before.

"Title fixtures, recliners and it goes on for mile after mile," Frank Ibieta said.

Ibieta is a sales manager with Premier Chrysler Jeep Dodge, so he drives the route every day for work. The dealership uses the road for test drives and Ibieta has been watching the trash pile up for months.

"The dumping out here has reached epidemic proportions," Ibieta said.

Not only are the piles of trash and debris unpleasant to look at, it's also creating a safety hazard.

"You have to worry about what you'll encounter coming around the turn because you may have to swerve into oncoming traffic or possibly end up in the woods," Ibieta said. "There's just no telling, it's awful."

It's challenging to keep the area clear of debris as it has easy access and a very low volume of traffic to deter the illegal dumping of trash. While we are mindful of conditions that exist in this area and make a concerted effort to address this issue, our forces are tasked to prioritize a number of other critical safety and maintenance needs within the area on a daily basis. Additionally, our current litter contract does not include heavy items, i.e., tires, mattresses, etc ., dumped enmasse. However, the contractor is responsible for and will retrieve discarded individual items. Upon notification for dumped loads of items, we schedule a cleanup and - in this case - will have district personnel address the area of concern in the near future.

Ibieta doesn't care whose responsibility it is, he just wants the area cleaned up.

"It's like a third-world country. It's nasty," Ibieta said.

In Orleans Parish, illegal dumping carries a fine of up to $5,000 but residents say most people know they won't get caught.

When Mayor Landrieu took office in May 2010, New Orleans had the worst blight problem in the nation and no strategy to address it. After extensive public input, research on best practices and advice from national experts, Mayor Landrieu announced an aggressive blight reduction strategy in October 2010 with an ambitious goal of reducing the blight count in New Orleans by 10,000 units by 2014, which the City exceeded. The strategy prioritizes data-driven decision-making, innovative new enforcement policies and opportunities for reinvestment to grow and strengthen neighborhoods. Today, New Orleans as a whole has more than 15,000 fewer blighted addresses.

Last year, the Sanitation Department responded to over 1,829 cases of illegal dumping on the public right of way. Sanitation Rangers completed 2,009 inspections (including 36 tire shops for compliance). The Department of Sanitation also removed approximately 35,101 waste tires from the public rights of way. The City advises owners to fence off their properties to prevent anyone from illegally dumping.

Residential properties which are eligible for garbage/recycling collection by the City, can place a limited amount of bulky waste, including mattresses, furniture, appliances, carpet and tree branches cut in 4’ lengths and bundled and up to four tires, curbside on the second collection day of each week for removal by the City's garbage collection contractors. Citizens can also bring up to four tires to the Department of Sanitation's Recycling Drop Off events which are generally held on the Second Saturday of each month from 8:00 a.m. until 1:00 p.m. at 2829 Elysian Fields Avenue.

Again, assistance from the community is essential to catching violators and deterring illegal dumping. The City encourages anyone who observes someone illegally dumping to report it by calling 311 Monday to Friday between 8 am and 5 pm or NOPD’s non-emergency number of 504-821-2222. When possible, please take down the following information:

· Any other identifying or incriminating evidence: pictures

· Your name and phone number (optional)