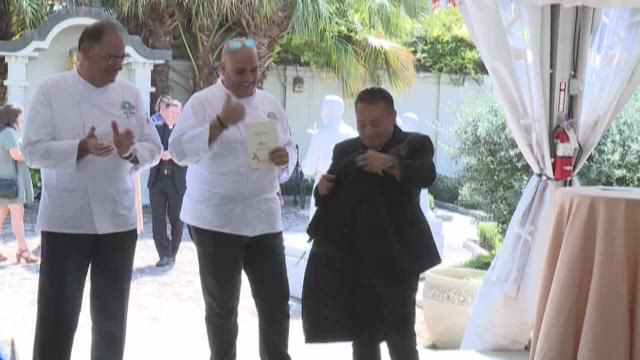 NEW ORLEANS – A special mass was said Monday to bless hospitality workers, but also extend that peace and favor to those around the world.

So much of New Orleans’ culture and relationships revolve around the table and unique food. It's also one of the main attractions to visitors.

That's why the first “Olive Mass" in the U.S. was celebrated in the French Quarter. Organizers said it was also a time to extend an olive branch to people near and far.

The inaugural Olive Mass at the St. Louis Cathedral was to thank and bless the area's 86,000 hospitality workers, who work long hours, especially at night and holidays, helping people celebrate life's biggest occasions.

"The purpose is to lift up and to pray for chefs, for those in the food and beverage industry, and in, those in all of the hospitality industry," said Archbishop Gregory Aymond.

The hospitality industry is one of the things that makes local culture enjoyable.

"It just seems like whenever there's a party going on, you always have to have a restaurant there, and they're the first ones there and the last ones to go," said Greg Reggio, owner of Zia, Semolina and Mizado.

Hospitality workers are the backbone of why so many visitors keep coming back.

"The overall spending that occurs in the hospitality industry is now over $7 billion by the visitors that come here," explained Mark Romig, President and CEO if the New Orleans Tourism Marketing Corporation.

"People who work in the food and hospitality industry are the unsung heroes of our nation's cultural formation, as they are the sources of our celebration," said Father Patalinghug, Chairman of The Table Foundation.

Monday was about far more. Chefs for Peace flew in from Israel for the Olive Mass. They are Christian, Jewish and Muslim, working together for peace in the Middle East.

“That we can come together and we can cook and we can eat and we can bring peace at the table, the breaking of bread, that's where we can find peace. It's going to be amongst ordinary people like this," said Chef John Besh, Owner of the Besh Restaurant Group.

With them were Grace Before Meals and The Table Foundation, hoping to bring families back together around the dinner table. Restauranteur Dickie Brennan saw this as a way to bring New Orleanians back together.

"I can't think of a better way to do it than to sit at a table with food. We have such a rich tradition of doing that in this city. That's what everyone loves doing," said Dickie Brennan,
Managing Partner of Dickie Brennan and Company.

The local hospitality industry is one of the main selling points used to bring big national games and events to the city.

There are four area schools that give degrees in that field.