Since early 2020, Texas regulators fined about 268 of the state’s 1,200 nursing homes for infectious disease control deficiencies. 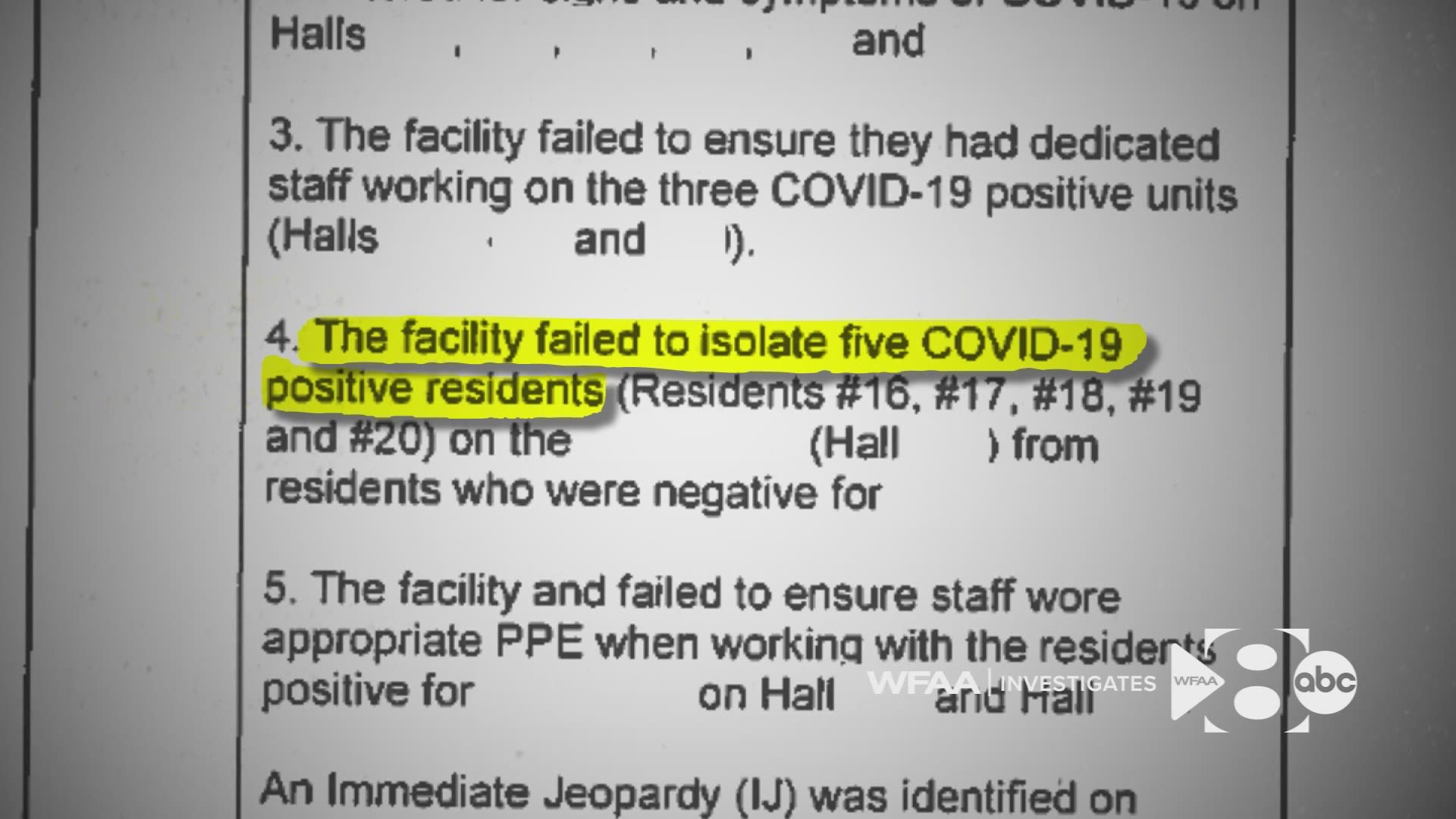 But 78% of those penalized nursing homes received federal “infection control quality incentive” payments that covered - or more than covered - the cost of those fines, according to a WFAA analysis of records from the HHSC and the Centers for Medicaid and Medicaid Services (CMS).

Federal “quality incentive” payments were initiated to give incentives to nursing homes that had achieved low infection and mortality rates among their residents, officials said.

The WFAA review, however, found dozens of nursing homes receiving “quality incentive” payments that had high numbers of COVID-19 deaths and infections among residents and staff the past year.

“So, how many people in the performance of their job get a bonus for doing a terrible job?” said Brian Lee, a former nursing home regulator.  “The nursing homes obviously do.”

Lee, who runs Families for Better Care, a nonprofit that seeks to improve nursing homes, said the federal program had a “disconnect” because it doled out monies without taking into account state fines or inspection findings.

Instead, the federal Nursing Home Infection Control Quality Incentive Program payments are based on how well a facility did in a given month for “their rate of infection and rate of mortality,” according to the Heath Resources and Services Administration (HRSA), the federal program administrator.

Congress set aside funds to help nursing homes during the pandemic as part of the CARES Act.  As of late February, the CMS sent out four rounds of payments nationwide totaling more than $2.1 billion. Texas nursing homes received $131.6 million in “quality incentive” money.

Nursing homes already have received $7.4 billion in federal relief money for financial hits due to the pandemic, including more than $600 million to Texas nursing homes, CMS records show.

A CMS official reached for comment said the federal “quality incentive” program has the goal to “incentivize and provide added relief and support to nursing homes working hard, in a pandemic not seen in over a century, to preserve the life of vulnerable nursing home residents…”

Unlike the Small Business Administration loans as part of the CARES Act, nursing homes need not apply to get the money. The facilities also don’t have to repay it.

The HRSA and CMS are part of the Department of Health and Human Services.

HRSA officials declined to comment directly about the program but said on background that the program was holding nursing homes to “strict standards” in order to protect residents and staff against the pandemic.

However, based on his review of the federal payments, Lee said if a facility does well in a particular month, they get “quality incentive” payments, regardless of what occurred in other months.

“It's like [the federal government] forgot everything that happened …in the early days” of the pandemic,” Lee said. He is currently conducting a similar analysis of payments to nursing homes from across the nation. He said he is finding similar discrepancies.

Consider the case of Brentwood Place One, the site of one of the deadliest COVID-19 outbreaks in North Texas.

Fourteen residents died from COVID-19 and more than 80 residents got infected with the virus, state records show.

Regulators fined the facility $104,025 for infection control deficiencies, according to CMS.

However, Brentwood Place One received $351,132 in “quality incentive” payments for the facility’s performance between September and December, records show.

When state regulators, however, visited the facility in late April and early May, they found many problems, according to an infection control report obtained by WFAA.

“That ends up resulting in that everyone ultimately will be COVID positive in your facility, because you're not abiding by infection control guidelines that had been in place for decades,” attorney J.T. Borah, who specializes in nursing home cases, told WFAA in reviewing the inspection report.

Due to prior concerns about flu and pneumonia among highly vulnerable elderly nursing home residents, infectious disease control guidelines have been in place for years, Borah said.

Prior to COVID-19, for example, CMS sent out emergency preparedness updates, most recently in February 2019, to nursing homes about the need to enact infectious controls including isolation of infected patients and reminders about PPE use.

“There is literally nothing new with COVID-19,” Borah claimed. “They all should have been prepared.”

According to the 33-page state inspection report on Brentwood Place One, the medical director told inspectors that “there was nothing that could have been done differently to prevent the spread of the virus in the building.”

However, a facility nurse told inspectors that “she thought the spread of the virus could have been slowed if the facility would have tested everyone at the same time and isolated those who tested positive,” the report said.

“They had so many deaths because they didn't take the right precautions,” said a former employee who spoke to WFAA on the condition of anonymity. “They didn’t care.”

Another Dallas-area nursing home, Skyline Nursing Center, was the site of another deadly outbreak. Six residents died and more than 80 were infected.

HHSC regulators imposed a penalty of $41,470 for infection control deficiencies.

Their findings are outlined in a 100-page infection control report.

Regulators arrived at Skyline in late April. By then, repeated statewide advisories to nursing homes to enact safety and infectious diseases procedures had been sent out.

The report catalogues a number of infection control deficiencies. Inspectors found employees not wearing proper PPE, failed to “ensure residents were monitored” for symptoms of COVID, didn’t ensure “they had dedicated staff working … on the COVID-19 positive units,”  and “failed to isolate” COVID-19 positive residents from those that had tested negative.

The report documents a resident who did not have COVID-19 telling inspectors “he did not have a mask, but would love to have one.”

In another case, a COVID-19 positive resident was surprised to learn her roommate “had tested positive” because she “thought her roommate had tested negative … since the two remained roommates,” the report says.

The inspector reported that the resident without COVID-19 was sitting in her wheelchair at the entry to the room and was wearing a mask. The roommate with COVID-19 was not wearing a mask and said she’d been told by the staff that she only had to wear a mask when she left her room.

“The administrative staff knew who was positive or negative and still put them together. That, to me, is an abomination,” said Lee, the former nursing home regulator. “That is where people get sick, and they die.”

Inspectors also witnessed a resident who had tested positive “chewing on his fingers and wiping saliva on tables and chairs,” the inspection report said. “Staff did not clean table and chairs off after he did it." They also saw staff members touching the resident without gloves, and that resident was seen touching another resident’s walker while coughing and not wearing a face mask.

The nursing home administrator, who is not named in the report, gave regulators varying accounts as to why the facility had not moved to separate those who had tested positive from those that had tested negative.

He told regulators that the county health department had told the “facility not to move the residents who tested negative because those residents had been exposed to COVID-19 and moving them could expose other residents to the virus.” He told inspectors he was told that verbally, and did not have that directive in writing, the report said.

However, county health department officials disputed the administrator’s account, and told state inspectors that their “recommendation was that if it was feasible to move a resident who was negative for COVID-19 to another room, away from their roommate who was positive for COVID-19.”

When he was asked by inspectors why he didn’t move COVID-19 negative residents into rooms to quarantine, he “responded some residents were simply oriented to their room and space and might not go back to their old room,” the report said. He also said he did not want to “move a resident who was negative only to have them test positive later,” it said.

“So, in that situation, what you have is a shining example of a facility being in interested in profits over people,” alleged Borah, the attorney who handles nursing home abuse cases.

During the visit from inspectors, one employee told regulators she was working on a COVID-19 isolation hall the week prior and a different hall the day before, the report said.

"She said she found out her daily schedule when she arrived to work," the report said. "When asked if she was told she had to be dedicated staff on the COVID-19 hall if she worked it, she replied, no."

Calvin Norman’s mom, Ella, was one of Skyline’s six residents to die from COVID-19.

WFAA showed Calvin Norman a copy of the 100-page report we got from the state. He said he was shocked and saddened.

“I really didn't think it was going to be that bad,” he said. “But after reading all of the report, it was much worse than I ever thought it could have been up there. They were not prepared.”

His 83-year-old mother had dementia and chronic respiratory illness, but otherwise, her health had been stable.

When he couldn’t reach his mother by phone last March, he and his wife went to the facility looking for answers. He said an administrator came outside – not wearing a mask -- and told him his mother had been taken to the hospital the night before.

He said he was infuriated because no one had taken told him his mother was in the hospital. Norman later said he spoke to state inspectors about what happened.

Norman’s mother spent a month in the hospital before she died in early April.

“My mom was a Wonder Woman and I know she's in a better place,” he said.

In reading the report provided to him by WFAA, Norman said he learned that he was not alone in his concerns.  The report details how family members of other residents were not told that their loved ones were in the hospital as the facility was required to do, according to inspectors.

One family member told inspectors she called to speak to her loved one, only to be put on hold for about 20 minutes, and then told her loved one was in the hospital.

“My [loved one] cannot make his own choices/consent,” she told inspectors, according to the report. “I am his guardian.”

Another member found out his loved one was in the hospital when a hospital doctor called. He told inspectors that he did not want his loved one to return to Skyline as a result.

“If you can’t do minor things, then it puts the major things in question,” the unidentified family member told inspectors, according to the report.

Norman scoffed at the notion of re-training, saying, “Why do you have to be re-trained? You should have already had this in place.”

Skyline officials did not return repeated requests by WFAA for comment.

“The people who supposed to have been there to take care of her didn't take care of her,” said Norman, who has filed a lawsuit against Skyline.  “They didn't have a plan for them to have in place for something like this.”