"...now you know the readings. All the readings that came out now, everybody sees what's going on." 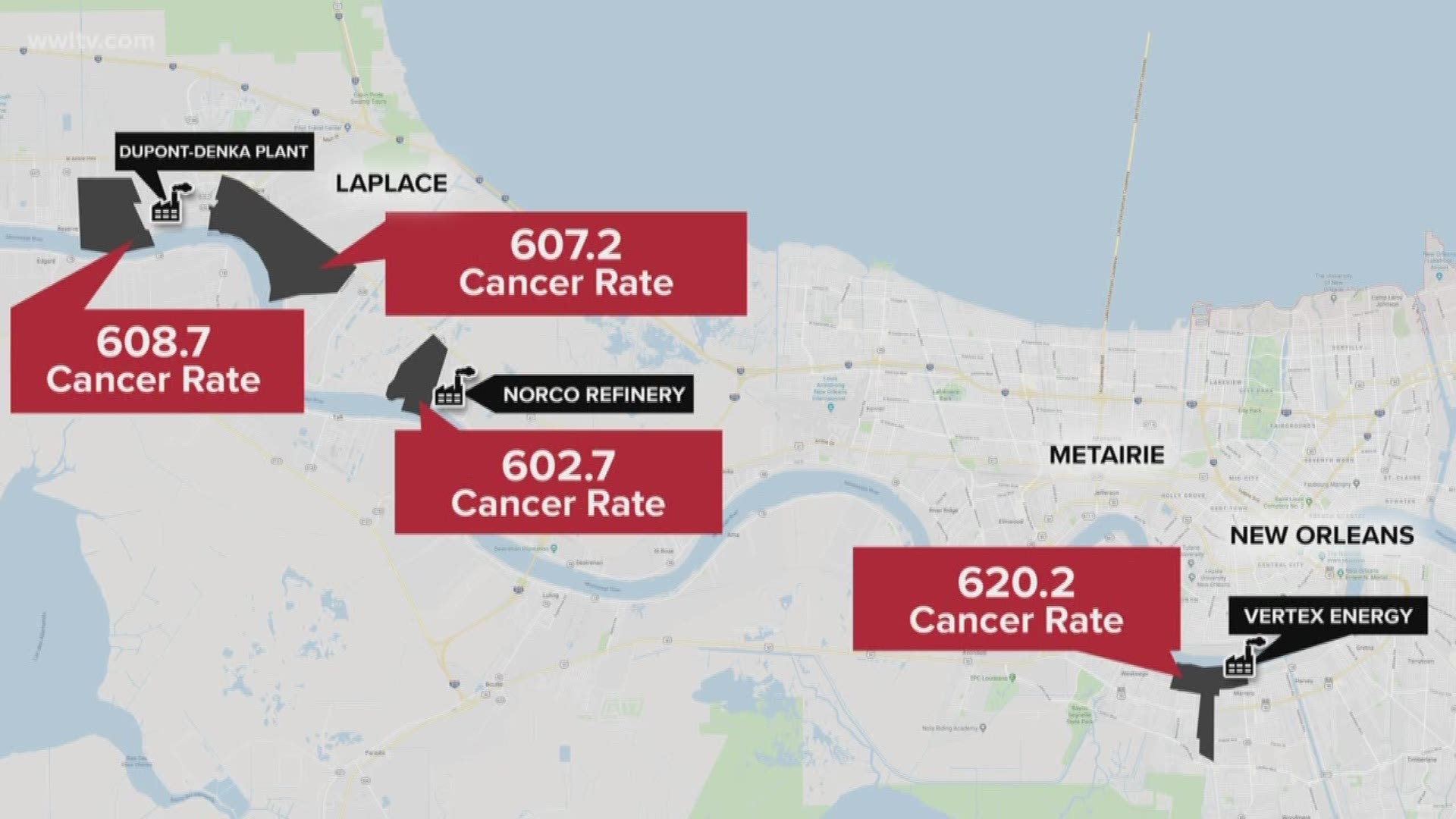 This is a follow up to the Eyewitness News investigative series "The Toxic Truth."

But a plant at the center of a toxic emissions controversy is pushing back, claiming the new data backs its claim that the chemical it produces is safe for surrounding residents. Louisiana’s top health official also weighed in, saying more analysis is needed to draw any definitive conclusions from the data.

Those data appear in a report just released by the Louisiana Tumor Registry, a central repository run by Louisiana State University that collects cancer diagnoses and deaths attributed to cancer. The report identifies dozens of census tracts across the state where the incidence rate of cancer is significantly higher than the state average.

Those include four census tracts in the industrial corridor known since the 1980s as “Cancer Alley,” but never with any definitive data supporting that moniker. Each of those neighborhoods reported at least 600 cancer cases per 100,000 residents from 2006 to 2014, a rate more than 25 percent above the already-high statewide rate of 486.7 per 100,000. 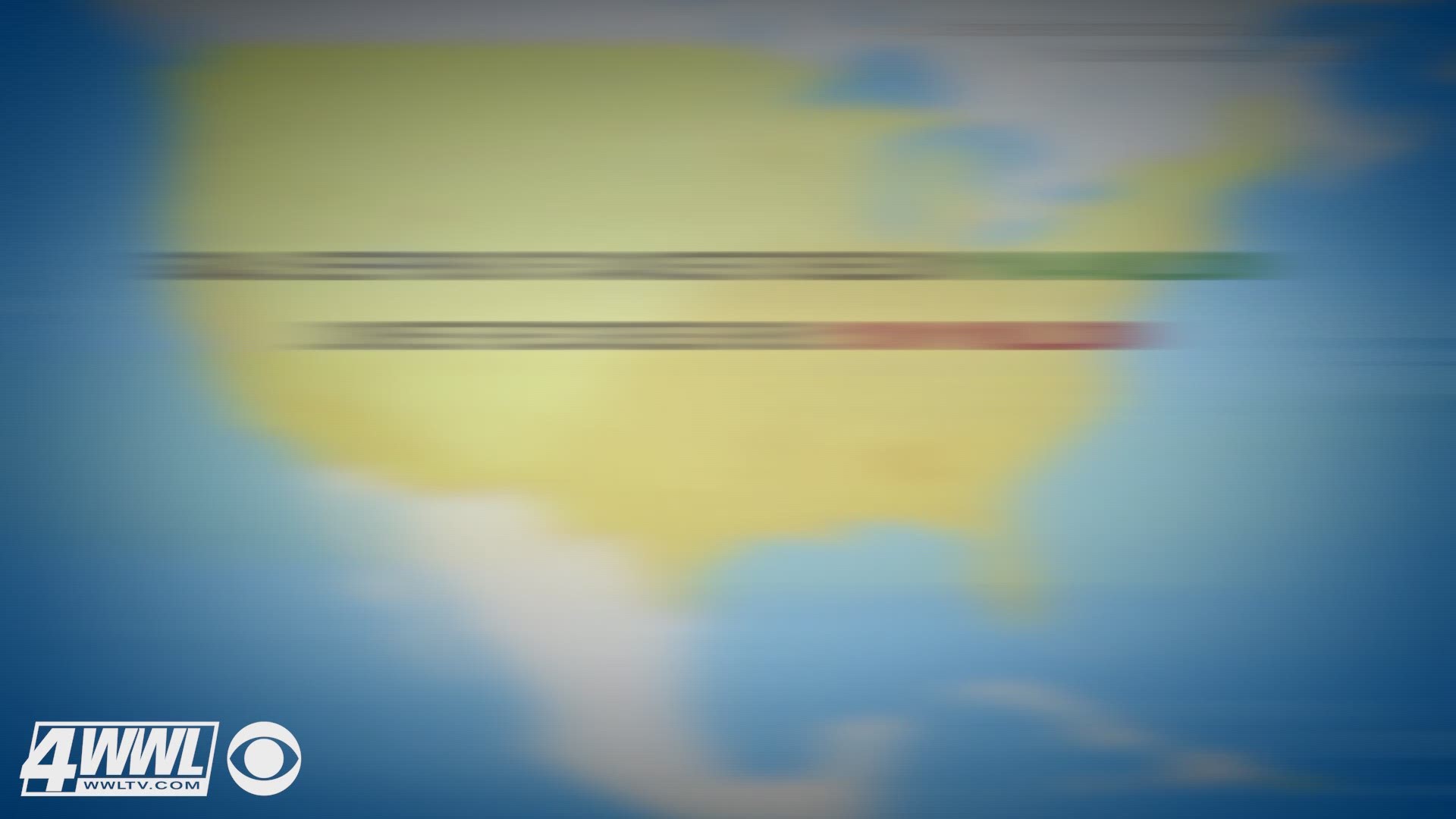 Those neighborhoods are all adjoining chemical facilities that have reported toxic releases to the U.S. Environmental Protection Agency, according to the EPA’s Toxic Release Inventory – the DuPont-Denka chloroprene plant in St. John the Baptist Parish, the Shell Norco complex in St. Charles Parish and the Vertex Energy refinery in Marrero.

“You know, you have cancer and you're trying to figure out where it come(s) from,” said Kerry Henry, who lives three blocks from the chloroprene plant in St. John, suffers from esophageal cancer and recently lost his father to cancer, too. “But now you know the readings. All the readings that came out now, everybody see what's going on.”

On the other hand, proximity to chemical plants doesn’t necessarily explain what causes these neighborhoods’ higher cancer rates. For example, the neighborhood in Marrero near the Vertex refinery has a cancer rate of 620.2 per 100,000 residents, but it’s also part of an area that’s been identified for years in mesothelioma lawsuits and scientific studies as ground zero for asbestos exposure.

There are several census tracts in Louisiana with elevated cancer incidence rates that are not close to chemical plants or refineries. Some are in residential areas of North Baton Rouge. The highest cancer rate of any single census tract in Louisiana (723.6 per 100,000 residents, or nearly 50 percent above the state average) is in the Central Business District of New Orleans, where there’s a lot of vehicle traffic but no facilities that have recorded toxic chemical releases with the EPA.

Environmental groups have been focused mostly on the DuPont-Denka chloroprene plant in St. John, especially after the EPA identified it as the source of the highest cancer exposure risk in the whole country. An EPA study released in 2015 found the census tract immediately west of the DuPont-Denka plant had, by far, the nation’s highest cancer risk from airborne toxins.

And that’s the census tract where Henry has lived for most of his life.

But DuPont, the company that invented the synthetic rubber neoprene and made it at the St. John plant for 46 years, argued that its practice of emitting more than 100 tons of chloroprene per year was safe.

The EPA’s risk assessment was openly challenged by Denka Performance Elastomers, the Japanese company that purchased America’s only remaining neoprene production facility from DuPont in 2015, just a few weeks before the EPA assessment was published.

DuPont and Denka both relied on data from the Louisiana Tumor Registry to try to undercut the EPA’s findings. For decades, the LSU-based Tumor Registry has found the cancer incidence rates in St. John the Baptist Parish, as a whole, fall below the state average. Louisiana’s top environmental regulator, Department of Environmental Quality Secretary Chuck Carr Brown, also took that position.

“We looked at Tumor Registry data, we engaged the Department of Health and their epidemiologist and we determined at that point in time there was no health emergency that had to be addressed,” Brown told WWL-TV in February.

But Oliver Houck, an environmental law professor at Tulane University, said the state has been using parish-wide figures to mask the real impact of toxic air emissions.

“They used it as a shield, saying that the registry doesn't show any problems, although the risk rates are astronomical,” Houck said.

With that in mind, the state legislature passed a law last year requiring the Louisiana Tumor Registry to start reporting cancer rates at the census-tract, or neighborhood, level. Environmental scientist Wilma Subra, who has been collecting data on chloroprene emissions in St. John for the last two years, and Retired Army Gen. Russel Honore, who famously led federal troops into New Orleans to restore order after Hurricane Katrina, asked lawmakers for the change.

And now that the first census-tract data is out, Subra says the latest Tumor Registry report justifies their concerns.

“It all fits with what the communities have been saying for many, many, many decades,” she said. “So it's finally putting it in print so they can say this is what we've been telling you all along.”

Denka looks at the new data differently, however. The Tumor Registry report also highlights increased incidence rates for specific types of cancer, and Denka spokesman Jim Harris emphasized that there are no high rates in St. John for the two cancers most directly associated with chloroprene – liver and lung cancer.

“The data show there is no increased incidence of the cancers suggested by the 2010 (EPA) report to be associated with chloroprene exposure compared to the state averages,” Harris said. “In fact, this new Tumor Registry report found among all the cancers studied, only one census tract in St. John Parish showed a statistically significant increase in incidence of any type of cancer compared to the state average: prostate cancer. This cancer has never been associated with chloroprene exposure by the EPA or any other published scientific literature.”

Harris’ statement refers to a 2010 EPA report on chloroprene to justify focusing on the two specific types of cancer, even though Denka rejects the report’s central findings about the relative danger of breathing chloroprene and its likely carcinogenic qualities. Houck said citing the rates of specific types of cancer is a diversionary tactic. He said those rates are irrelevant if the rate of all cancers is high.

DuPont and Denka say they have always operated the chloroprene plant within their state permit for toxic air emissions, which is a total of 201 tons per year. Environmentalists say that total is way too high because Louisiana DEQ has never set a safe standard for chloroprene.

What’s more, DEQ rarely fines businesses for violating their pollution permits and the penalties are minimal. DEQ records show the agency issued 207 monetary fines last year totaling less than $300,000, an average of less than $1,500 per fine. Only three fines exceeded $5,000.

DuPont and Denka say they have always operated the chloroprene plant within their state permit for toxic air emissions, which is a total of 201 tons per year. Environmentalists say that total is way too high because Louisiana DEQ has never set a safe standard for chloroprene.

What’s more, DEQ rarely fines businesses for violating their pollution permits and the penalties are minimal. DEQ records show the agency issued 207 monetary fines last year totaling less than $300,000, an average of less than $1,500 per fine. Only three fines exceeded $5,000.

Harris also questioned the validity of neighborhood-level data, arguing the sample size is too small and parish-wide numbers are more statistically significant.

Despite its ongoing battle with the EPA over chloroprene’s toxicity, Denka agreed in 2016 to install new equipment to reduce its chloroprene emissions by 85 percent starting this year. It spent more than $30 million to build and install the equipment by the end of December, but it is still testing it. Brown said in February he wants to wait and see how much Denka can reduce emissions before setting an official air-quality standard for chloroprene.

When WWL-TV asked Brown to comment on the new Tumor Registry data, his spokesman referred all questions to the state Health Department.

In an interview with WWL-TV, Dr. Jimmy Guidry, the state health officer, said he is heartened by the lack of elevated liver and lung cancer rates near the DuPont-Denka plant.

“You would think after 30 or 40 years, those cancers that are most sensitive to chloroprene would show up in higher numbers. (We’re) not finding that, so that gives me comfort,” he said.

But Guidry also said it’s too early to draw any clear conclusions from the new Tumor Registry data.

“You have to look at the data and see, what’s the age group, what are the types of cancers and try to figure out could it be due to an exposure,” Guidry said. “Or is it due to genetics? Or is it due to what they eat or what they drink or if they smoke? So, there are all these factors that you have to look at to try to make sense of what that means.”

“Most plants up and down the river will tell you they're much more afraid of citizen damage plaintiffs than they are of the state,” Houck said.

But Henry is one cancer patient who said he won't be suing. A former refinery worker himself, he said he doesn’t want to hurt the plant’s employees by forcing a shut-down. He said he doesn’t need restitution, just clean air.

“Suing is not the answer,” he said. “The scrubber (a kind of equipment used to reduce emissions) is the answer. Get it right, (be)cause you still have people over there working and they need their job, just like everybody need their job.”