Sleep on Lundi Gras is always tough: the excitement on the eve of Mardi Gras, the preparation, the knowledge that the alarm sounds early to get a prime spot on the parade route. In March of 1984, New Orleanians braced for a colder-than-normal Carnival, with temperatures expected to barely kiss the 50’s, while a house fire dealt the Brown family a devastating blow no one could ever prepare for. 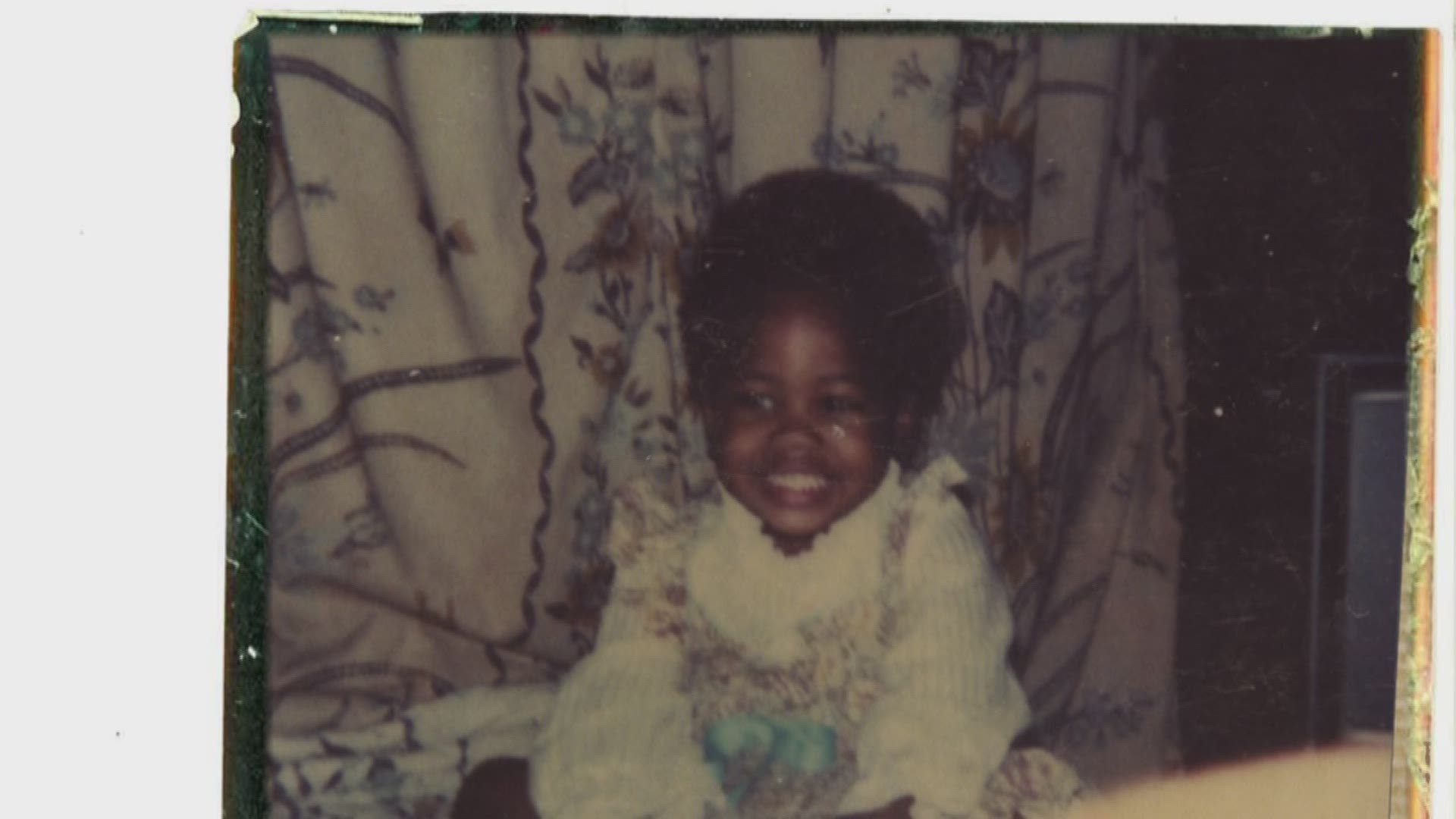 The Search for Ramona Brown:

The night of the fire

The night before Mardi Gras, at 2631 Memorial Park Drive, Aubrey and Johnnie Mae Brown and their 10 children bundled up. Some of the kids snuggled together around a furnace in the dining room like it was a big slumber party. Two of the others slept alone in separate bedrooms, while their teen-age sister talked on the phone with her boyfriend past 3 a.m.

That night the two youngest boys, Aubrey Jr., 4, and Kevin, 2, had fallen asleep on the sofa in the living room within eyesight of the kids curled up in the dining room.

The wind howled as a cold front moved through their Algiers neighborhood the morning of March 6. To this day, Pam, as she was known, describes in detail the way a killer roared through their home.

“I didn't hear nothing,” Nickerson remembered, “I didn't smell nothing. When I raised up, I saw the fire.”

The three-bedroom single-story house was built with a wood frame and lined with wood paneling, décor that added fuel to what would be a fatal fire.

In the house next door, 2619 Memorial Park Drive, Gary Olson was staying with his old Air Force buddy, Ralph Adams.

“It was a nasty night. It was really cold. There was a drizzle,” Olson remembered.

He brought his would-be wife with him from Florida to experience Mardi Gras for the first time.

“We fried chicken and made potato salad and some other things we put together so we could have food when we went to Mardi Gras. We were gonna leave early the next morning to get a spot, just like we normally would,” Olson said.

While the Browns’ children say they discovered the fire without a sound, Olson and Adams say two or three loud bangs woke them shortly before 3 a.m., just before they were to get up to head to the parades.

“I thought, oh, is somebody shooting or something? And when I got up to look out the window, I noticed that the house next door was on fire,” Olson said.

“I was upstairs. It was a two-story house. [Olson] was in the guest bedroom. We said, we better get everybody out of the house. So, we evacuated with all the children. The fire went right into my daughters' bedroom window and engulfed our house,” Adams said.

What the Brown children did not hear that morning shocked them.

“We were sleeping and my oldest sister was like, ‘Get up! Get up! Fire!” said Simona Brown, who was 6 at the time of the fire.

“It's her voice. She has a big mouth, a loud mouth. And I'm so grateful she does,” jokes their mother, Johnnie Mae Brown, about her eldest daughter, invoking a much-needed smile as some of the family sat together recounting the horror of the fire.

Simona had been sleeping in the dining room with 4 of her siblings. She said she remembers them all scrambling, bumping into each other as they tried to follow Pam out the front door, then the side door.

“All of them was pulling on me and the chain got stuck. It was a glass thing where you turn the thing or whatever. Once I got it, we all ran out,” Pam said.

Johnnie Mae, sleeping with her husband, Aubrey, in their bedroom at the rear of the home, awoke to Pam’s screams of “Fire!”

She jumped out the window after she said Aubrey was knocked down by the pressure of the fire when he tried to open their bedroom door.

“It was just so strange because I'm hollerin' and screaming,” Pam said.

“We could see clearly in the kitchen and the den, but in the living room area where my two brothers Kevin and Aubrey was sleeping on the sofa, they didn't hear anything,” Simona said.

“No noise, no nothin'. They didn't say nothin', Pam said.

Eventually, Aubrey Sr. followed his wife out the bedroom window. The two helped their eldest son, Joseph, out the window of his bedroom.

That’s when the family describes hearing the two toddlers, Kevin and Aubrey Jr., begin to scream for help from inside the burning house.

“All you could hear was Mom! Dad! Help me please,” Simona recalled pausing, trying to hold back tears.

“My daddy said he touched something. He touched something. But that was it. He couldn't get them,” Pam said. “I tried to go get them. I ran up the steps to go into the door and my husband came behind me and pulled me back from the back on my shirt and he said I wasn't going to be able to make it but I was thinking to just run in and grab the both of them and jump out the window,” Johnnie Mae remembered choking back tears, “It didn't happen.”

“I was right there by them. Right there. But I was so scared because it was coming fast. It was chewing it up fast, you know,” said Pam.

“There was a loud knock on the front door and the lady from next door was hollering and crying, ‘I need help! I need help! My babies are inside!’ I went outside to look and by the time I got out to the corner, I couldn't get a hose or anything. So, I ran back inside and I called 911,” Olson said.

He remembered being unsure of the address as he was visiting from out of state, but said the fire department operator told him the trucks were already on the way, with the fire station just a few blocks from the Browns’ home.

Police reports and a 1984 WWL-TV interview with Adams at the scene indicate he told the responding police officers that he was the one who called 911 that morning. But in a recent interview, Adams didn’t recall who alerted the authorities.

A timeline of events, pieced together from investigative reports, shows the New Orleans Fire Department received the call at 3:05 a.m., with NOPD Officer Thomatra Green indicating he was called to respond on the police radio minutes later.

How quickly firefighters arrived is unclear, as the New Orleans Fire Department said their calls for service data, investigative reports and evidence from the fire were all lost, ironically, in a fire at the NOFD supply warehouse in the days following Hurricane Katrina.

In an article published in the Times Picayune newspaper the day after the fire, a spokesman for the NOFD said the fire was under control about 30 minutes after they received the call.

“They found them. They found Aubrey which was older than Kevin. Found them 100 percent bones and Aubrey was hugging Kevin, I guess because he was trying to protect him from the fire,” Simona said.

In the immediate aftermath of the fire, investigators unsuccessfully searched for the remains of Ramona Brown, 3.

She was last seen sleeping alone in what they described as the girls’ bedroom.

“She was sleeping because I checked on her before I went to lay down,” Johnnie May continued, “Not knowing that was the last time I was gonna see her.”

In the afternoon, after the smoldering stopped, investigators found a third set of remains.

Newspaper clippings from the search for Ramona Brown

He had been assigned to a recently-formed arson task force in with the NOFD.

While Mendoza said the Memorial Park Drive fire is one that stuck with him over the years, Pfister didn’t recall the details.

“I really don’t remember much about it,” he said, declining to be interviewed.

When the sun set the day of the fire, Mendoza said they were confident they had found the body of Ramona Brown.

But he said former NOPD Superintendent Henry Morris, now deceased, called Mendoza to headquarters for a meeting the following day.

Mendoza said the chief informed him the third body was not Ramona, it was an animal.

“Immediate orders were to return to the scene and bring all the resources I had available to me. To do excavation of the scene to determine where that child's body was,” Mendoza said.

It was the beginning of an extraordinary investigation that spanned days with dozens of detectives and firefighters combing through the ash and rubble, the remnants of the Browns’ home and beyond to try and find the little girl.

They came up empty.

Once investigators gave up, the family went back to search for themselves with a morbid desperation forced on them by the vicious blaze.

“After the fire, we would go back there by Johnnie Mae house, 'cause they didn't have nothing left, and we would rake, sift through the stuff and see what we could find. Couldn't find nothing. Not a trace,” said Dorothy Nickerson, mother to Johnnie Mae, grandmother to the ten children.

In news coverage of the search, Aubrey Sr., described trying to find a tooth, some flesh, even a finger of Ramona’s that, in a sick twist of fate, would point them to some sense of closure.

But with no trace of the girl ever found, the family feels she’s still out there somewhere.

“I just think somebody got her. Somebody took her. I mean they had to. There's no evidence, no teeth print no nothin’,” Pam said.

And while the story was never relayed to police, one of the children has a vivid memory of seeing Ramona after the fire, a memory her family members said she has been telling them for more than 30 years.

Have you seen Ramona Brown? Let us know.