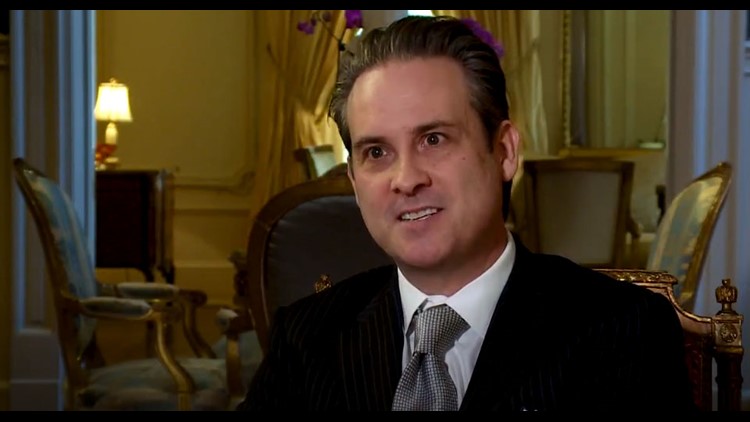 A New Orleans businessman is at the center of a multi-billion-dollar trade deal backed by the presidents of the U.S. and China, but also by powerful Russian investors, including a former top lieutenant to President Vladimir Putin.

The revelation this week that Russian oligarchs and Putin’s first presidential chief of staff, Alexander Voloshin, are among New Orleans lawyer and entrepreneur John Houghtaling’s partners in American Ethane has spurred international controversy.

American Ethane has lined up a combined $72 billion in contracts to export ethane gas from the Gulf Coast to China for the next 20 years, drawing praise as a potential boon for the Louisiana and Texas energy sector and for taking a bite out of the U.S.-China trade imbalance, but also raising questions about what a leading British newspaper called “Kremlin connections.”

And yet, American Ethane’s deals in China appear to be in direct competition with Putin's plans to build Russia's own ethane pipeline to China.

“My partners are undoubtedly helping the U.S. at the expense of Russia,” Houghtaling told WWL-TV in an interview. “I’m quite proud that my Russian partners decided to take huge sums of their money out of Russia and invest it into America, for a deal that will reduce the deficit with China and displace Russian gas.”

American Ethane made a major splash in November by signing a landmark $26 billion trade deal with a Chinese firm at a ceremony in Beijing, with U.S. President Donald Trump and Chinese President Xi Jinping watching and applauding.

Voloshin’s 2.5-percent stake in American Ethane was reported for the first time publicly this week after an investigation by the British newspaper The Guardian and Russian research unit Dossier Center. The Guardian article named five Russians who helped Houghtaling start the firm and said “the chief beneficiaries of the Trump-endorsed deal live and work in Moscow.”

The article is written by Luke Harding, the best-selling author of “Collusion: Secret Meetings, Dirty Money and How Russia Helped Donald Trump Win.”

But other reporters who cover Russian politics took issue with the report. Oliver Carroll, Moscow correspondent for two other British papers, The Independent and the London Evening Standard, tweeted in reaction: “you’d think (Voloshin) was one of Putin’s close lieutenants. That just isn’t the reality.”

Indeed, major Western media outlets, including The Washington Post and The New York Times, reported Voloshin, a holdover from Boris Yeltsin’s government in the 1990s, resigned from Putin’s administration in 2003 to protest the arrest days earlier of Mikhail Khodorkovsky, a prominent critic of Putin’s.

Harding reports Voloshin “remains an influential figure in Russian politics” and has strong contacts in the U.S., including with former Secretary of State Henry Kissinger.

But Houghtaling said Voloshin’s relationship with Kissinger establishes him as one of the “good guys.” Houghtaling also said he checked with U.S. government authorities about each of his Russian partners before doing business with them and none of them has been targeted by sanctions imposed against some Russian political and business leaders.

U.S. Sen. Bill Cassidy, R-La., was aware American Ethane had Russian investors when he helped Houghtaling get his seat at the signing table during the Trump-Xi summit, and he agrees the deal is actually bad for Russia.

“The reality is that no matter who backed American Ethane, they were helping to undermine Russia’s share of the international gas market, and at the same time making the United States stronger by building an American plant and supporting American jobs,” a Cassidy spokesman told WWL-TV.

Houghtaling is married to a Russian pop star and model. They have a daughter who is also Russian and live in a 22,000-square-foot mansion that’s believed to be the largest and most valuable on New Orleans’ historic St. Charles Avenue. He said he “takes great offense” at the way Russians tend to be painted with the same broad brush.

“Are you an enemy of the U.S. simply because you are Russian?” he said. “None of my partners is on any sanction list. So to demonize them simply because they are Russian is more a tactic of the Gestapo of Nazi Germany.”

Houghtaling owes the launching of American Ethane to another prominent Russian. In January 2014, he invited Russian oligarch Roman Abramovich, billionaire owner of English soccer club Chelsea F.C., to New Orleans. The Russian’s private 767 was so large, Houghtaling had to arrange for a special ladder so Abramovich could disembark at Louis Armstrong International Airport.

They met around the dinner table in Houghtaling’s ornate home and Abramovich agreed to provide $50 million in seed money for American Ethane.

“He believed in the project in 2014, when there was not an ethane export terminal operating in the United States,” Houghtaling said. “And the fact that he would come to New Orleans and the fact that he would put up a huge amount of money to build infrastructure in the Gulf to benefit us from Louisiana was an honor. I remember being poor, poor, poor, and here I have one of the wealthiest men in the world, wanting to take his money and invest it with us.”

Abramovich, who has dual Russian-Israeli citizenship, is on the U.S. Treasury’s official list of “oligarchs” but isn’t one of the seven who were singled out for sanctions in April for their role in what the Trump administration called "the Kremlin's malign agenda.”

Two of Abramovich’s businesses were represented by Dutch attorney Alex van der Zwaan, the first person convicted in Robert Mueller’s investigation into alleged Russian collusion with the Trump campaign and interference in the 2016 U.S. election.

Abramovich’s interest in American Ethane ended about half a year before the lucrative deal with China. American Ethane was on the ropes in 2016 when oil prices hit a 14-year low. Houghtaling said Abramovich lost confidence in the project and was owed about $21 million for loans to Houghtaling.

Houghtaling fought in court for about a year to avoid paying the debt to Abramovich’s firm Eucla Investments Ltd. Houghtaling negotiated a settlement in April 2017, according to court records, and the remaining partners bought out Abramovich for an undisclosed sum.

Back on solid financial footing, American Ethane was then able to strike its first big deal with the Chinese conglomerate Nanshan Group.

That deal requires American Ethane to build a terminal on the Gulf Coast and Nanshan to construct a similar high-tech facility in China so it can receive the ethane in its liquid form at the intensely cold temperature of 155 degrees below zero and produce ethylene fuel.

Houghtaling said he and his partners will also need to build 32 ethane carrier ships, each about 900 feet long, to transport an estimated 7.2 million tons of ethane a year. That’s almost twice as much as the amount of ethane – about 4 million tons -- the U.S. has been exporting to all countries annually.

“There’s nothing we can do better than to link our national prosperity to China and for them to be dependent on us for energy and natural gas – not Russia,” Houghtaling said.

American Ethane’s website clearly discloses that two of its board members are Russian businessmen Andrey Kunatbaev, founder of a Russian television network, and Konstantin Nikolaev, owner of Russian shipping and transportation companies. Another Russian investor is Mikhail Yuriev, a former deputy in the State Duma, Russia’s equivalent of Congress. His name is disclosed in court records, but Abramovich is not mentioned by name in those public filings.

Houghtaling called his Russian partners “extremely brave” for supporting a project in direct competition with Putin’s plans to export ethane.

Louisiana’s other senator, John Kennedy, R-La., said he wasn’t aware of any Russian investors when he sent a letter to the Commerce Department last year advocating for American Ethane to be featured at the summit between Trump and Xi.

“I did help John’s company,” Kennedy said in an interview with WWL-TV. “I didn’t cross examine him about who his investors were. He’s a Louisiana business and he was pretty far along with this thing. That’s all I know. I didn’t know who his partners were.”

In spite of that, Kennedy said he agrees with Cassidy's assessment of the trade deal:

"This project is going to create a lot of good jobs for Louisiana."