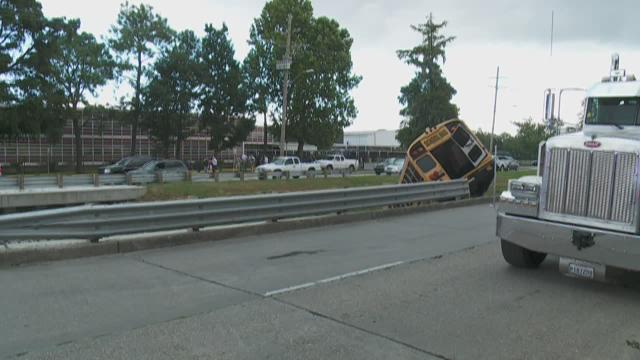 METAIRIE, La. -- Yellow paint on metal at Elise and West Metairie avenues shows where a school bus struck a short guardrail before plunging into the drainage canal in front of TH Harris Middle School in Metairie.

Neighbors wonder if a longer guard rail would have made a difference in yesterday's accident.

“You see where it clipped it,” said Press. “If it had gone the full length, it wouldn't have had the chance to go in the canal, the guardrail would have stopped it. It would have glided up the side of the guardrail.”

“Probably make it higher and longer, along the whole side of it,” said Casey Wallace, a Metairie resident.

Jefferson Parish has been wrestling for years on how to install safety measures to keep drivers out of open drainage canals.

A recent study showed it would cost the parish $100 million to install barriers along the four canals that run along West Esplanade, Veterans Blvd., West Napoleon, and West Metairie.

Parish Councilman Paul Johnston said given Tuesday’s accident, guardrails should be installed in front of schools.

“I will look at possibly putting those guard rails from turn lane to turn lane on West Metairie and in any of my areas where I have canals in front of schools, and I think it's important in front of playground too,” said Johnston.

However, according to the acting public works director for the parish, there is not enough room to install guardrails on the canal in front of TH Harris School.

He said the only option is to install a box culvert there and cover the canal, and that's very expensive.

“To close it from Elise to Harring on this small portion of West Metairie, it would cost $11 million to close the canal,” said Reda Youssef.

The parish was expected to begin construction on priority canal-roadway improvements by the fourth quarter of this year.

Parish Councilman Ben Zahn said he is working with the Kenner City Council to put guardrails at Joe Yenni and Chateau boulevards. There have been two fatalities there in the past year.