Video shows girl in tears, family says she was told to leave school because of braided hair

The video was reportedly filmed Monday morning at Christ the King Elementary School in Terrytown. The video begins with family members comforting a girl who is crying. 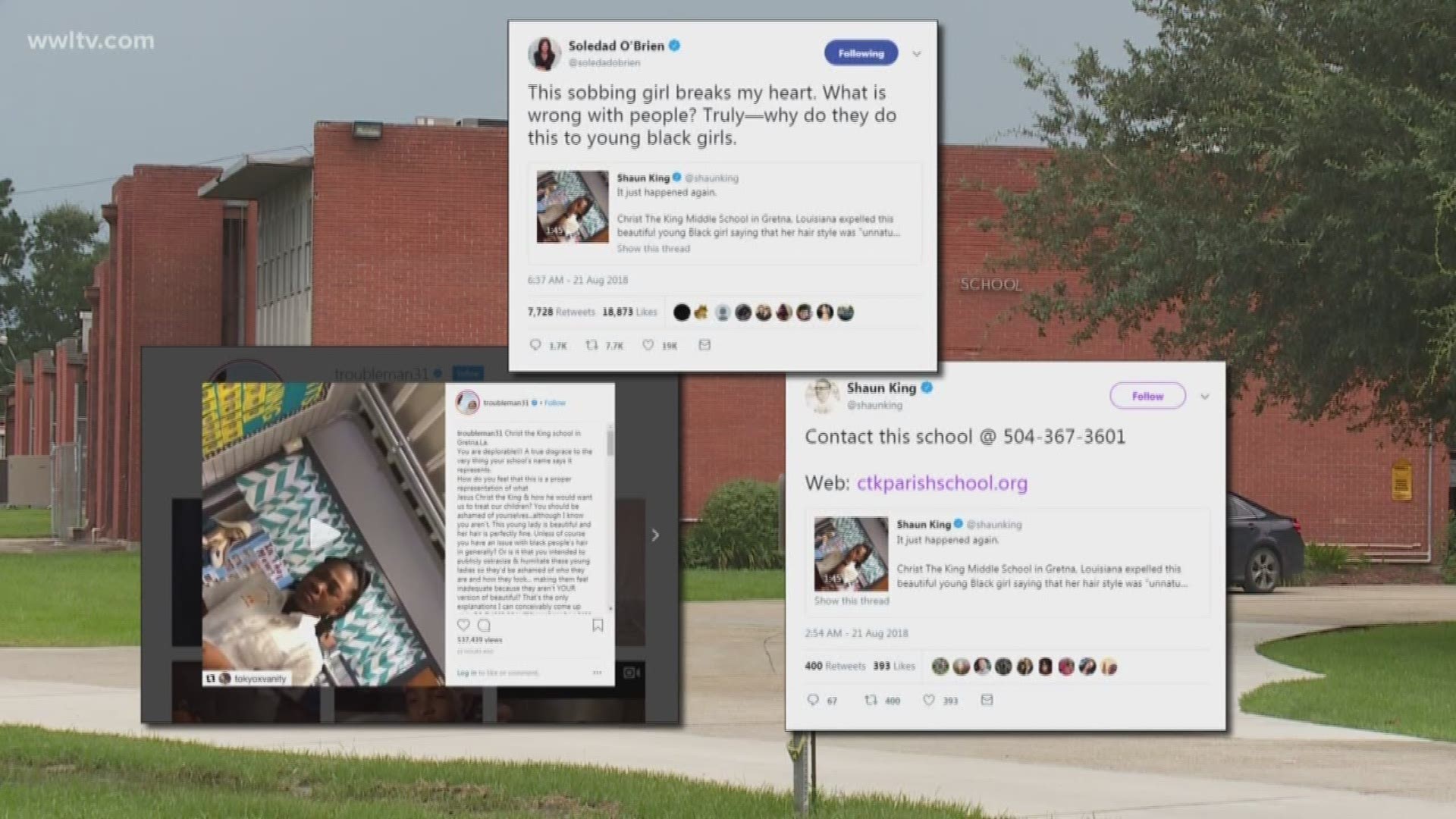 TERRYTOWN, La. – A Jefferson Parish school is getting national attention after an Instagram video shows a girl being sent home in tears because of her hairstyle.

The video was reportedly filmed Monday morning at Christ the King Elementary School in Terrytown. The video begins with family members comforting a girl who is crying.

A woman’s voice is heard saying, “I don’t want this to happen.” The video does not show this persons' face.

In the background, you can hear another woman saying, “What’s wrong with her hair? Her hair is fine.”

The video ends with the girl sobbing as she walks out of the school and gets into a car.

“Boys and girls: only the student’s natural hair is permitted. Extensions, wigs, hair pieces of any kind are not allowed.”

Family members tell Eyewitness News the school implemented the new policy over the summer and did not notify them about the change.

The girl's family added that the girl attended a parent-teacher meet and greet before classes started and administrators did not say her hair was against school policy.

Archdiocese of New Orleans Superintendent RaeNell Houston said the school notified parents about the policy change during the summer and on the first day of school. Houston released the following statement Tuesday morning:

"Archdiocese of New Orleans schools develop policies appropriate for their respective schools. Christ the King Elementary School has a policy that states: "Boys and Girls: Only the students' natural hair is permitted." This policy was communicated to all parents during the summer and again before the first day of school, and was applied to all students. Furthermore, the school leadership worked with families as needed to ensure compliance.

As relates to the student in question, the school offered the student’s family an opportunity to comply with the uniform and dress policy and the family chose to withdraw the student; the student was not suspended or expelled.

We remain committed to being a welcoming school community that celebrates our unity and diversity."

The policy prohibiting extensions, wigs and other hairpieces does not appear in parent-student handbooks for the two previous years. The first day of class for 1st through 6th grade was Aug. 9, according to the school's Facebook page.

The girl's family says it plans to meet with an attorney Tuesday to file a discrimination lawsuit against the school.

Amber Ward, owner of NolaBraider hair salon, says hair braiding is worn often times for easy maintenance and it is important within her community.

"When it comes to sports, when it comes to different activities having your hair braided is more of a convenience," Ward said. "When it's properly done, it makes their hair grow. Hair braiding is apart of our culture, it goes back for thousands of years."

Dr. Rashida Govan is the Executive Director of Project Butterfly New Orleans. She says by banning hairstyles the school doesn't deem natural, the school is demanding students of color change who they are.

"I think it sends a message that you are not acceptable in the way you show up, who you are is not acceptable because that is a part of who we are with these hairstyles," Govan said. "So if you want to continue to operate in this community, you better reconsider any policy that suggests to young people that who they are isn't valuable."

For the child who left the school in tears, Dr. Govan says the damage has already been done.

"I think that young lady got that message loud and clear that she isn't valuable, they're saying 'we would rather you not be here than exist in this space as you are' and that is a horrible message to send to young people," Govan said.

Dr Govan had a different message to send to the student heartbroken over this policy:

"To that young lady you are valuable, you are beautiful and your hair is totally acceptable to our community," Dr. Govon said.

Rapper and activist T.I. shared the video on his Instagram Monday night calling the school “deplorable.” His video has been viewed more than 430,000 times since Monday night.

“You should be ashamed of yourselves, although I know you aren’t,” he wrote. “This young lady is beautiful and her hair is perfectly fine. Unless of course, you have an issue with black people’s hair in generally? Or is it that you intended to publicly ostracize & humiliate these young ladies so they’d be ashamed of who they are and how they look.” 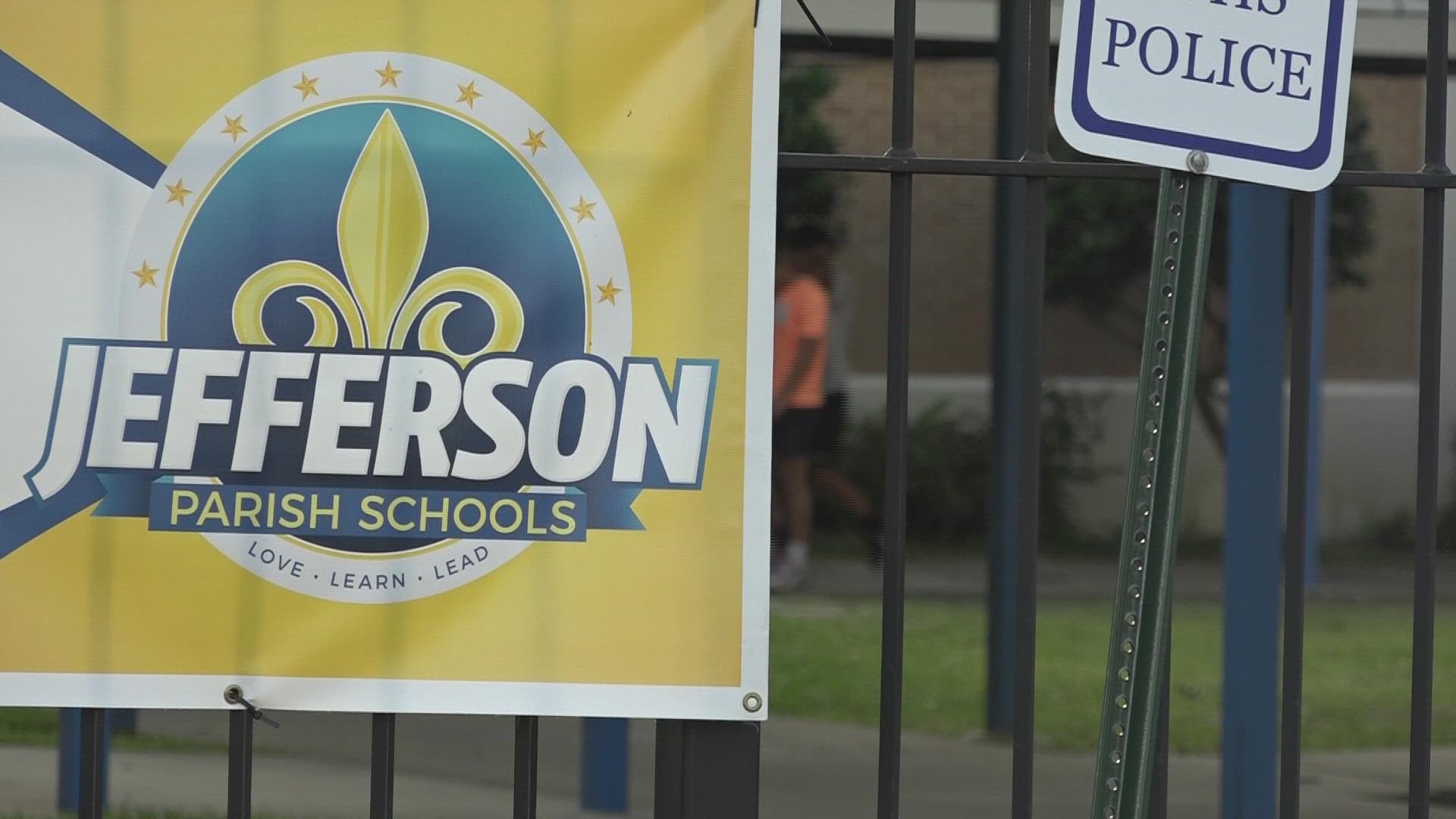