Moffett co-founded the internationally-known Fortune 500 exploration company and headquartered it in New Orleans, where he became a major business leader. 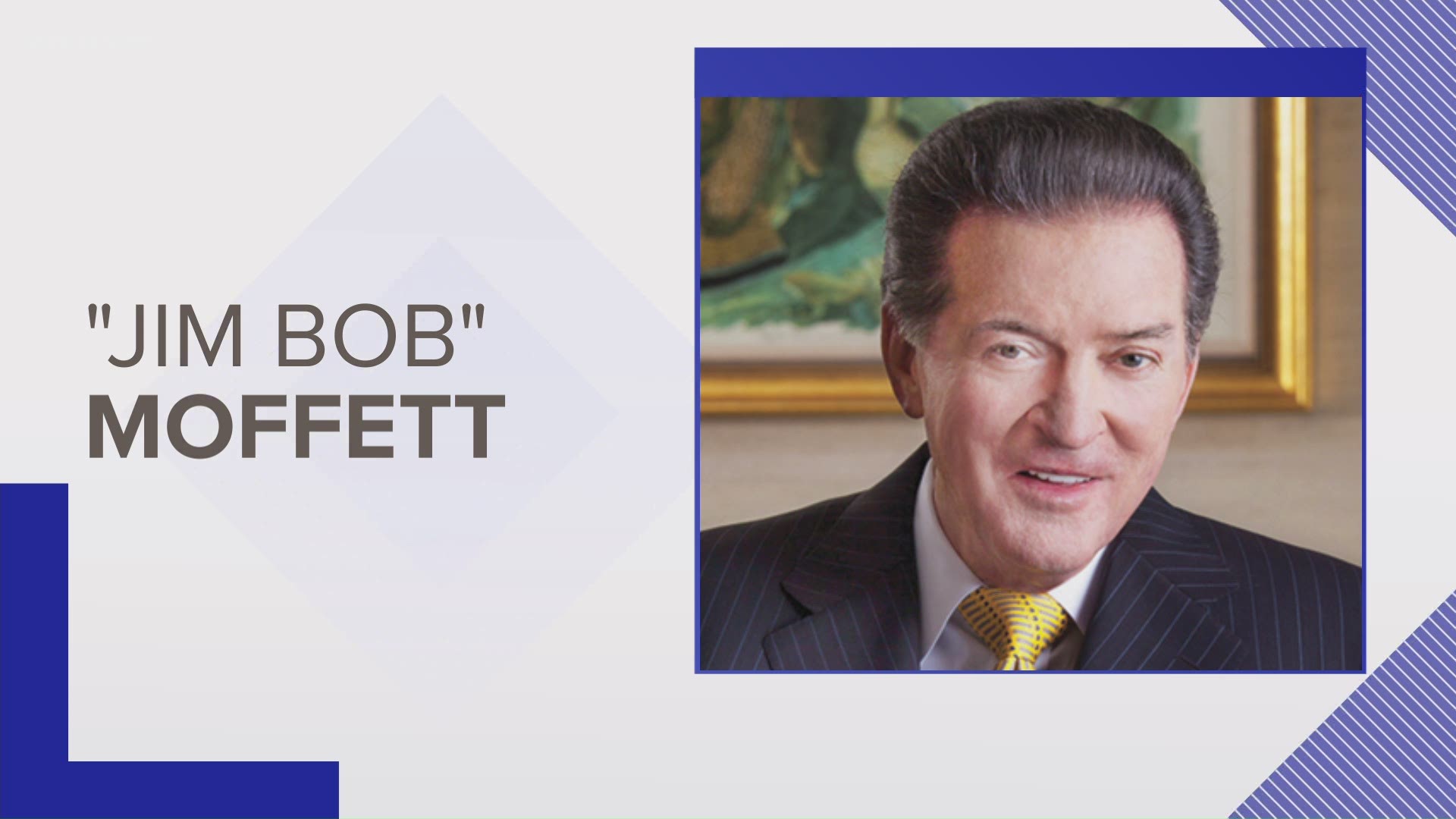 James R. "Jim Bob" Moffett, the co-founder and former CEO of Freeport McMoRan, Inc., the Fortune 500 mining and exploration company once headquartered in New Orleans, where he became a business titan, died Friday. He was 82.

His son Bubba said Moffett died of COVID-19 complications Friday at his home in Austin, Texas, according to The Times-Picayune/New Orleans Advocate. Moffett had been ill for several years.

Moffett stepped down as chairman of the company he co-founded in 2015.

Now based in Phoenix, Freeport extracts copper, gold, and molybdenum from sites in North and South America and Indonesia. In 2019, the company's revenue totaled approximately $14 billion.

The company began in New Orleans as McMoRan Oil & Gas, founded in 1969 by Moffett and partners Ken McWilliams and Mack Rankin. Letters from their surnames combined to form the company’s name.

In 1981, the company merged with Freeport Minerals Co. to form Freeport-McMoRan.

Over the decades, in addition overseeing to the company’s oil and gas finds in Louisiana and the Gulf of Mexico, Moffett, a petroleum geologist, is credited with helping discover and develop the Grasberg copper mine in Indonesia. The deposit is the largest gold producer and the third largest copper producer in the world.

In a 1994 interview, Moffett said he was proud of his active role in such exploration efforts, something with which some might have assumed the CEO of such a large company would not be directly involved.

"Since I don't wear a white coat or an Al Einstein hairdo, people don't realize I'm a scientist. I spend 90 percent of my time on some really fun, high technology exploration things," Moffett said.

Moffett was a native of Houma who grew up in Golden Meadow. His father was an itinerant oilfield worker. When Moffett was five, his father left him and his sister and mother, who moved the family to Houston.

"We had a tough time," Moffett told Times-Picayune columnist Angus Lind in 1994. "We had a broken home, lived a housing project-type life, but nobody considered it because we didn't know any better."

After high school, Moffett earned a football scholarship to the University of Texas at Austin, where he played for legendary Longhorn coach Darrell Royal. He majored in geology.

"All my aptitude tests said science but I hated math. Geology seemed to be something I could get my hands on. It was a tangible science vs. an intangible one,” he said in 1994.

Moffett came to Tulane University to get his master's degree and stayed in New Orleans.

According to New Orleans Magazine business writer Kathy Finn, as a young geologist Moffett made his name in the oil and gas industry as a successful wildcatter, “drilling one hole after another in the mineral-rich lowlands of Louisiana and bringing up large quantities of hydrocarbons.”

In 1969, Moffett teamed up with Ken McWilliams and B.M. Rankin, who were the “Mc” and “Ran” that combined with Moffett to create McMoRan Exploration Co. in 1969.

In the 1980s, after merging with Freeport, Freeport McMoRan Inc. became a major, publicly traded, independent oil and gas producer. Its interests also included gold, copper, silver and uranium, as well as agricultural minerals, such as sulphur and phosphoric acid.

In its early years, the company was headquartered in an office building on Causeway Boulevard in Metairie, before moving downtown. Its 23-story Poydras Street office tower would carry the company’s name for more than three decades.

Moffett lived with his wife and family in a St. Charles Avenue mansion and, as one of the city’s wealthiest people, became very active in civic and business affairs. He was among the founders of the Business Council of New Orleans, comprised of the leaders of the city’s biggest companies.

Finn credits Moffett with leading a resurgence among local business executives in the 1980s and 90s.

‘During his years as a business activist, Moffett forced New Orleans to take a harder look at its economic future. His efforts inspired many local business owners to follow in his footsteps, and over the years forward-thinking, civic- minded entrepreneurs have become more the norm than the exception in the city,” she wrote in 2016.

Moffett also fostered a spirit of philanthropy, with both him and his company making generous donations to dozens of charitable causes. Twice, BusinessWeek magazine named Freeport-McMoRan the most philanthropic company in America on the basis of total giving as a percentage of revenues.

“I got involved in the community because of what I saw needed to be done,” he told The Times-Picayune in 1994.  “To build a company here, I couldn't build it in an environment of a bunch of pessimists. I had to build it in an air of excitement and passion. You assume in this business, geology, that anything can be done and nothing is impossible. It's the same with the community."

In 2000, the Horatio Alger Association awarded Moffett its Norman Vincent Peale Award, which is given to members of the association whose "extraordinary humanitarian contributions to society distinguish them as exceptional role models." Moffett served the association as a board member and chairman.

Moffett and his company were also a frequent target of criticism from environmental, human rights and safety advocates. Some charged that the company’s mining activities had harmful effects on air and water quality. Others accused the company of unsafe and even deadly conditions at its Indonesian mines.

In 1995, Freeport McMoRan endowed a chair in environmental communications at Loyola University with a $600,000 gift. After a group of Loyola students picketed Moffett's home because of deaths and alleged abuses at its Indonesian mine, Moffett called a news conference and asked for his money back. Cooler heads eventually prevailed.

In 2007, Freeport-McMoRan was able to engineer a $26 billion buyout of another mining company, Arizona-based Phelps Dodge Corp. The merger formed the world's largest publicly traded copper company. Freeport then moved its headquarters to Phoenix, though it maintained a presence in New Orleans.

In recent years the company ventured back into oil and gas, with challenging results because of the slump in that sector of the economy. In 2013, Freeport completed a controversial $19 billion deal to acquire Houston-based Plains Exploration & Production Co.

As part of the deal, the company took on heavy debt as commodity prices plunged, the company’s fortunes diminished. That led to the 2016 auction of its oil and gas assets and Moffett’s departure from the board of directors. He became chairman emeritus.