Judge Peter Cahill ruled on motions for a joint trial, change of venue, and cameras in the courtroom. 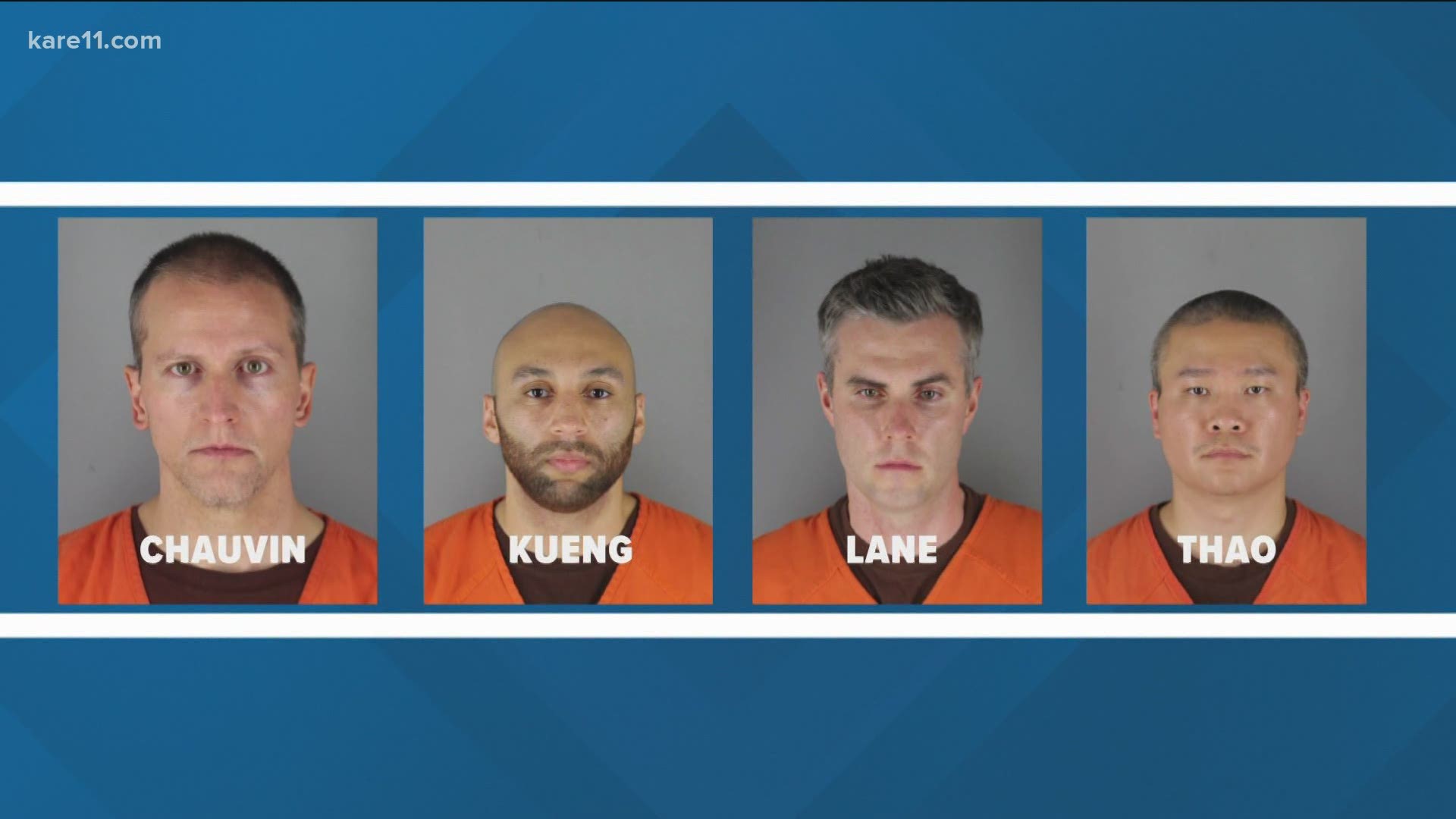 MINNEAPOLIS — Several major rulings were issued Thursday that could have a significant impact on the cases against four former Minneapolis police officers charged in the death of George Floyd.

Among the decisions by presiding Judge Peter Cahill was that Derek Chauvin, Tou Thao, J Alexander Kueng and Thomas Lane will be prosecuted together in one trial, and that trial will be held in Hennepin County instead of a different location.

Cahill issued a 51-page ruling on the issue of a joint trial that went against the motions of all four defense attorneys, who wanted the trials to be held separately for a number of reasons. All defense attorneys in their motions said if individual defendants blame the other officers for Floyd's death, jurors may become confused and just convict all of them, instead of considering individual roles in what happened.

But Judge Cahill ruled against the motions for separate trials, citing the similarity of the charges and evidence that will be presented against all four former officers. He also mentioned the potential impact on witnesses if they were forced to testify at four separate trials.

The judge also considered the "collective interest of the people," writing that they will absorb the verdicts all at once as opposed to in piecemeal fashion which he said "is likely to compound and prolong the trauma to the community and the State."

Judge Cahill also considered the "collective interest of the people," writing that they will absorb the verdicts all at once as opposed to in piecemeal fashion which he said "is likely to compound and prolong the trauma to the community and the State."

Judge Cahill also issued a decision that "preliminary denied" motions by the attorneys for Chauvin, Thao, Kueng and Lane to move the trial to a different venue. The judge wrote that safety concerns voiced by the former officers' attorneys in the wake of several incidents at the Hennepin County Courthouse following a recent hearing are arguments for better security planning, and not for moving the trial to another community. In fact, Cahill wrote that moving the trial to a smaller courthouse in a different community could actually be more dangerous as there would be fewer entrances and exits, and easier access to the former officers and their legal team.

Another argument by defense attorneys, that pre-trial publicity will make it impossible to seat an unbiased journey, was turned away by Judge Cahill as well. He wrote "no corner of MN has been shielded from pretrial publicity" and that opinion surveys currently being conducted will better tell if a fair trial can be held in Minneapolis.

Cahill made it clear that the court may rehear arguments on moving the trial as the proceedings move forward. 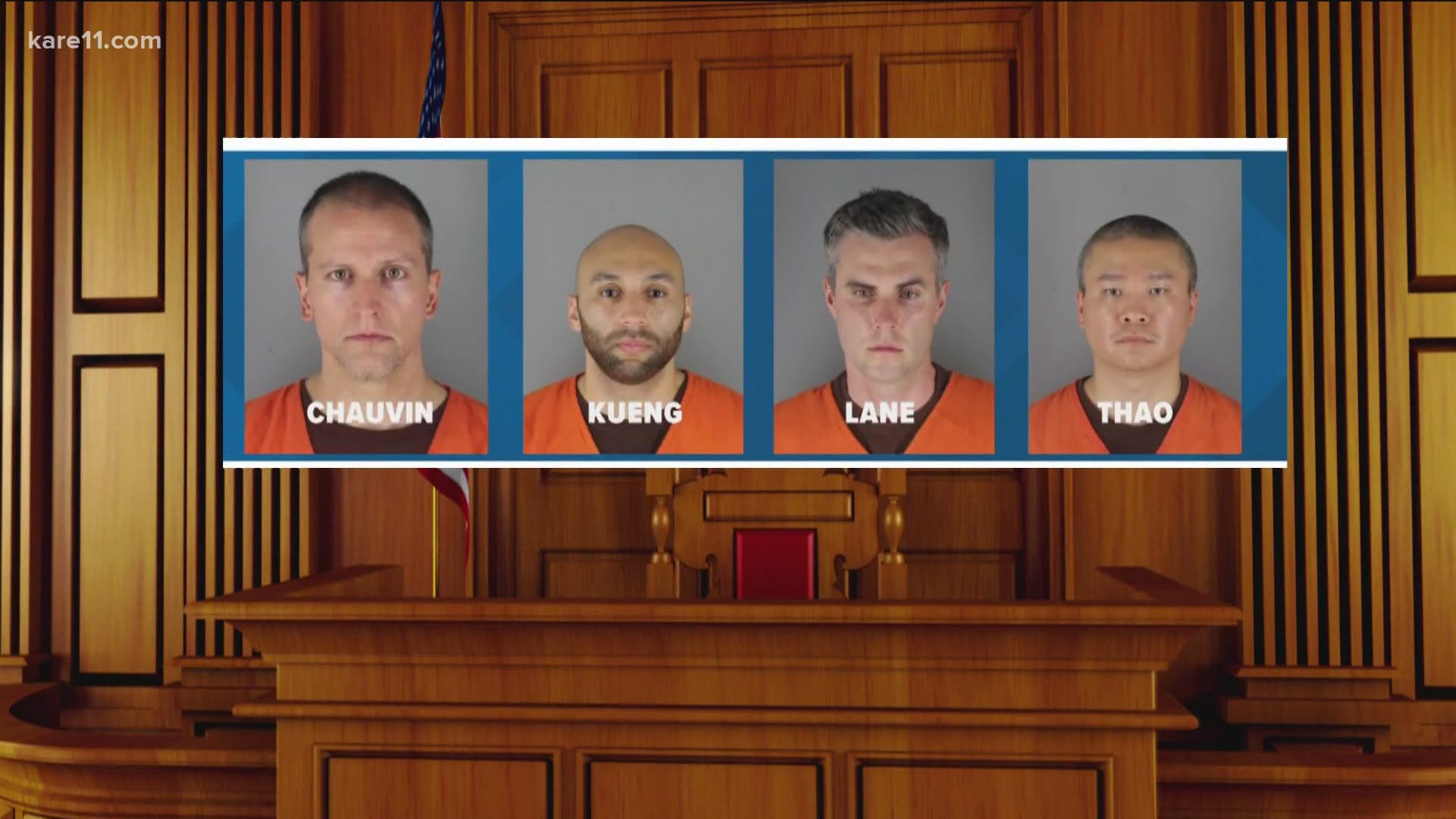 Defense teams did get one decision in their favor Thursday. Judge Cahill ruled that cameras will be allowed in the courtroom, citing the difficulties presented by COVID-19 and the need for social distancing. Because courtroom access and seating will be limited, Judge Cahill said cameras are needed to present a trial that is truly public. He did include a list of limitations in his ruling. Among them:

KARE 11's Lou Raguse has been covering the Floyd case since the beginning. He says it will be interesting to see if the Attorney General's Office plans to appeal the cameras in court decision, noting there is time for the appeals process to take place. "I'm sure that's why the judge made this decision as early as he did," Raguse said on Twitter.

Judge Cahill made decisions on two other motions, ruling that the identities of jurors will remain secret until the trial is over, reasoning that activists from both sides of the issue might try to find or contact them, and influence the verdict. Those jurors could also be targeted for protests and/or vandalism.

The other ruling involves Hennepin County Attorney Mike Freeman and attorneys from his office. Judge Cahill had previously ruled that Freeman could have no role in the case, after the county attorney met with the medical examiner without a non-attorney witness present, a meeting that the judge called "careless."

On Thursday Cahill softened that ruling, saying Freeman and his office cannot be "advocates" in the case but are not prevented from "participating."

Minnesota Attorney General Keith Ellison, the official lead prosecutor on the case, seems satisfied by the court’s decisions today. "The murder of George Floyd occurred in Minneapolis and it is right that the defendants should be tried in Minneapolis," Ellison said in a released statement. "It is also true that they acted in concert with each other and the evidence against them is similar, so it is right to try them in one trial."

Thomas Plunkett, attorney for J Alexander Kueng, says the rulings allow him to move forward in shaping the case that will be presented in court. “We are continuing to review the Court’s orders. My goal is to assure that a fair trial occurs for Mr. Kueng," Plunkett told KARE 11. "We are happy to have the orders so we can start preparing for our trial and presenting the truth in front of a jury.”

Earl Gray and Eric Nelson, attorneys for Thomas Lane and Derek Chauvin respectively, had no comment on Judge Cahill's rulings. We were unable to reach Joseph Paule, attorney for Tou Thao.