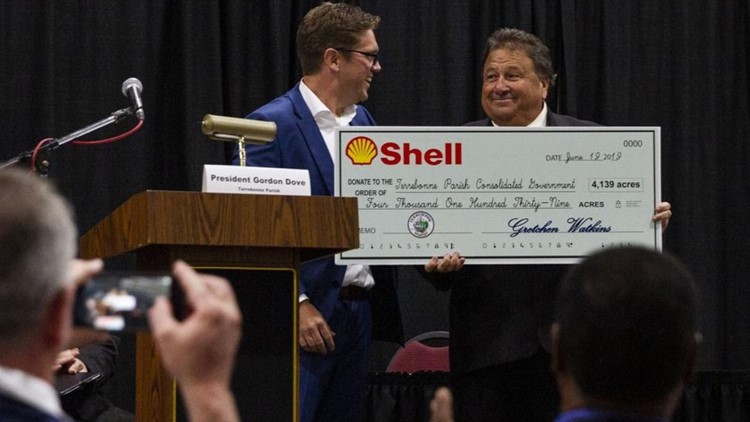 The donation, located between La. 24 and La. 311, and split by U.S. 90, will be used as a stormwater retention area, Terrebonne Parish President Gordy Dove said. About 2,500 acres is freshwater marsh.

Once fully developed, the property has the potential to store almost 1.8 billion gallons of stormwater from areas near Ellendale, Bayou Cane, Gray, Schriever, Martin Luther King Boulevard and Bayou Terrebonne, according to a news release from Shell Oil.

Andrew Rosser, Shell Oil’s general manager for the Mars offshore drilling corridor, said this is one of the ways the company is trying to “embrace nature-based flood-risk solutions.”

“Terrebonne Parish has been a leader in this nature-based approach,” he said on Wednesday during the parish’s Coastal Day activities.

Rosser said the donation is an investment in the community where some of its important pipelines are located.

Dove thanked the company for is donation, calling it a “huge step.”

He said the infrastructure will allow for the stormwater to be slowly released after severe weather.

The Grow Louisiana Coalition said the donation is an example of how coastal and environmental challenges can be addressed by collaboration.

“Shell’s land donation to Terrebonne Parish is the perfect example of how partnerships, not lawsuits, can help our state and our coast thrive,” Marc Ehrhardt, the coalition’s executive director, said in a news release.

Shell has also pledged $4.3 million for completing the elevation of La. 1 in Lafourche Parish, which leads to Port Fourchon. That money is in addition to the $2.4 million it has provided since 1997 for the project.