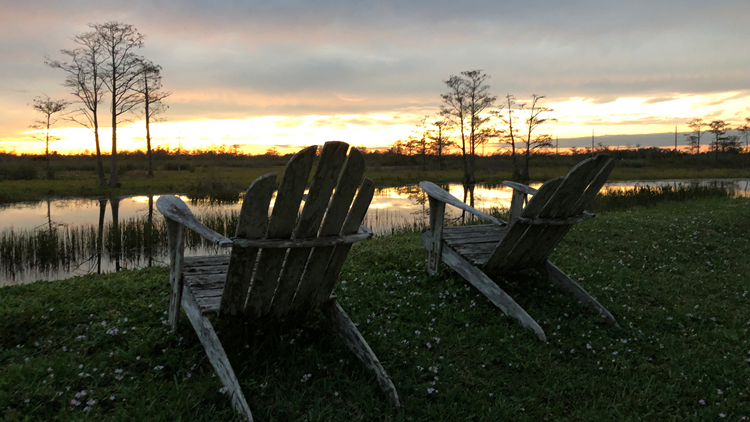 Without river sediment, Gulf of Mexico creeps closer to Houma

HOUMA, La. — Since 1932, the Gulf of Mexico has moved at least 10 miles closer to Houma as the sediment in the Terrebonne Basin has not been replaced.

In that same time frame, Morgan City, situated about 35 miles to the west of Houma, has yet to see any encroachment by the Gulf.

A recent study examined how the Atchafalaya Basin, adjacent to Terrebonne, has avoided many of the subsidence issues faced by areas like Terrebonne and Lafourche parishes by remaining connected to the Mississippi River through the Old River Control Structure, a diversion upstream that dates back to 1957.

Robert Twilley, the executive director of Louisiana Sea Grant and lead researcher of the study, said the stark contrast between floodplains of the Atchafalaya Basin and Terrebonne demonstrate the importance of the river’s natural cycles in building land and creating healthy wetlands.

Study: Without river sediment, Gulf of Mexico has moved 10 miles closer to Houma
Since 1932, the Gulf of Mexico has moved at least 10 miles closer to Houma as the sediment in the Terrebonne Basin has not been replaced.In that same time frame, Morgan City, situated about 35 miles to the west of Houma, has yet to see any encroachment by the Gulf.A recent study examined how the Atchafalaya Basin, adjacent to Terrebonne, has avoided many of the subsidence issues faced by areas like Terrebonne and Lafourche parishes by remaining connected to the Mississippi River through the Old
Houma Today

“If you want to talk about the power of the river, then just look at the Atchafalaya,” he said.

He noted that while the proximity to the river causes a lot of nuisance flooding to residents in Morgan City, especially during the spring flood season, it has maintained a strong natural barrier against hurricanes.

Unlike the fading marshes in parts of south Terrebonne and Lafourche, the wetlands to the south of Morgan City host large trees that are made possible by the elevation provided by the sedimentation of the river -- or the process of dropping sediment.

Twilley said the plants in the marsh need that constant source of elevation with new sediment to keep their roots from becoming too wet and drowning.

“The wetlands around Morgan City get that every year,” he said. “That sediment, that elevation capital keeps those wetlands alive and keeps the Gulf of Mexico where it’s been since 1932.”

With the deterioration of Terrebonne Parish’s natural barriers, residents have passed taxes on themselves to construct flood and hurricane protection, such as the Morganza-to-the-Gulf system.

While Twilley said the protection system is a feat of engineering, residents in Morgan City haven’t had to discuss building such a system because of the buffer provided by the wetlands.

“What’s the value of those wetlands?” said Twilley. “Look at the tax rate over in Terrebonne.”

The study notes that to combat the ongoing loss of marshes along the Mississippi River Delta -- the seventh largest delta in the world -- due to the high rate of subsidence and sea-level rise then “high sediment input will be necessary in a large scale.”

The study says river diversions like those proposed in the state’s $50 billion, 50-year coastal master plan can use the river’s natural pulse for “regional-scale wetland restoration.”

While restoration projects based in using dredged materials can offer “limited recovery,” the study points to diversions as the main solution to overcoming the long-term sediment deficits and elevation decline along the coast.

“The long-term maintenance of elevation platforms in both the proximal and distal sedimentation regions will require large sediment plumes from river diversions that can have large basin impacts,” according to the study.

Twilley said the results seen in the Atchafalaya Basin demonstrate that the river’s high and low cycles throughout the year lend to land building closer to the river, or diversion, while maintaining healthy estuaries for shrimp and oysters farther downstream where the sediment doesn’t reach.

Diversions have to follow the seasonal changes on the river, which allow for both the sedimentation of marsh during the spring flood and draining during the summer and fall.

“Let the rhythm of the river control those wetlands and look at how successful it’s been,” he said. “Nature figured this out a long time ago. Let’s just use nature’s cycle.”

Houma Courier Staff Writer Halle Parker can be reached at hparker@houmatoday.com or 857-2204. Follow her on Twitter, @_thehalparker.