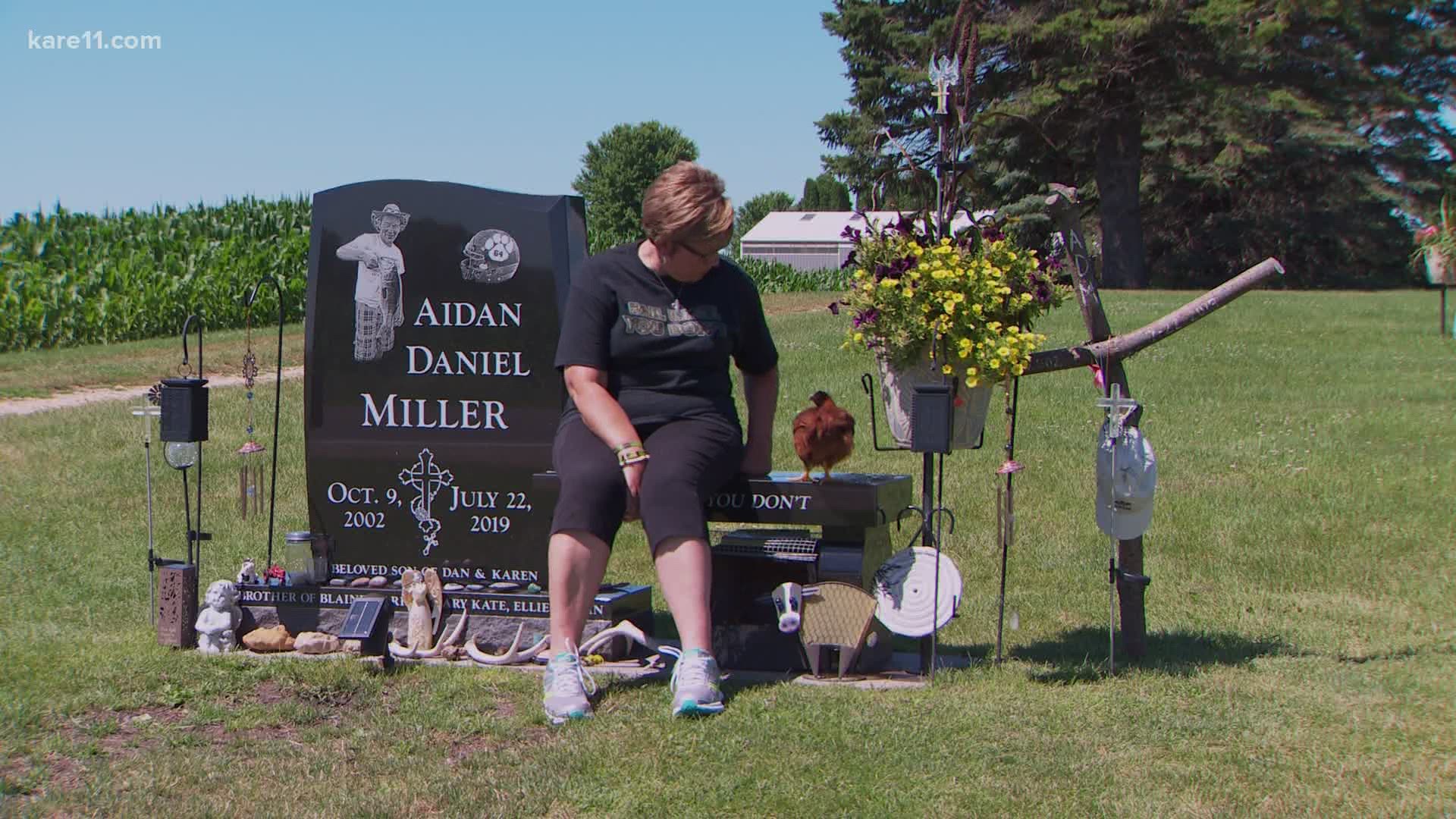 KELLOGG, Minn. — A surprise visitor to a rural Minnesota church cemetery is the talk of the surrounding countryside.

“We don't know where this thing came from, she just showed up one evening actually,” Dan Miller says.

It’s been three weeks now since a little red hen took up residence on the grave of Dan’s son, Aidan. The chicken still hasn’t left.

“It seems crazy,” Dan says. “There's probably a thousand other stones in the cemetery, but it just refuses to leave this one.”

Aidan Miller was fishing with friends when the seemingly healthy 16-year-old collapsed from a suspected cardiac arrhythmia.

“Next Wednesday, July 22nd, it will be one year since he passed away,” Karen Miller, Aidan’s mom, points out.

The approaching anniversary only serves to amplify the impact of the mysterious arrival.

No one knows where the bird came from, or why it showed up when it did.

Aidan’s parents do know their son loved animals and was especially fond of the chickens his family used to raise on their farm.

“C’mon,” Karen says, coaxing the bird. Angel jumps from the ground to the bench at Aidan’s grave site and stands next to Karen.

“There you go,” Karen reassures the chicken which begins plucking the flowers now within its reach.

“We thought, well if she's going to hang out here, we probably better bring her some food and water,” Karen says.

So, Angel now has a small bowl of chicken feed at the base of Aidan’s grave, not far from the box Dan build for her to nest in.

“There were coon tracks all over the grave one night, and yet she was still here in the morning,” Karen says. “I think Aidan watches over her at night and keeps her safe.”

Dan and Karen are faithful members of Immaculate Conception Catholic Church which stands across the road from the cemetery. But beyond the brick walls, in a chirping hen, they've also found what they needed to help them through July 22nd – and more.

“Because,” Karen says, “about a month ago I was diagnosed with breast cancer.”

On a recent visit, for the first time, Angel felt comfortable enough to hop onto Karen’s lap.  Karen couldn’t hide her delight as the bird stood nonchalantly on her leg.

It’s the sort of spirit-lifter Aidan would have wanted for his mom as she deals with one crisis after another.

“I've always said, I don't believe in coincidences,” Karen says. “I think it's something bigger than that.”

In a country church cemetery, there’s no need to ask, which came first: the chicken or the faith?