There is a rise in the tiniest victims of opioid addiction, newborns who have to go through withdrawal treatment right after birth and the cost of that treatment, along with future costs of life-long mental and physical health problems is skyrocketing. 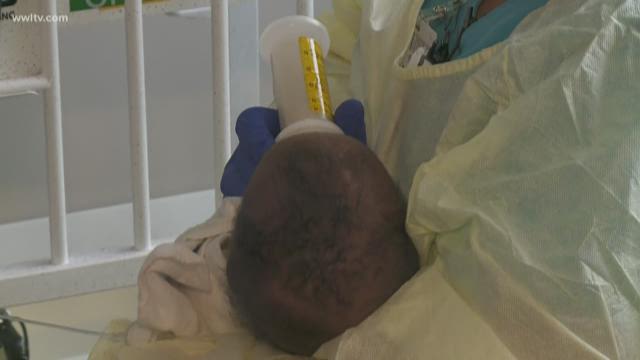 Lawyers and doctors say a new lawsuit is the voice of babies born addicted to opioids.

"We are in the midst of a medical crisis, a medical emergency," said lawsuit team member Dr. Brent Bell, who holds a Ph.D. in allied health and alternative medicine and is a certified physician assistant who has practiced at M. D. Anderson and Houston Methodist.

There is a rise in the tiniest victims of opioid addiction, newborns who have to go through withdrawal treatment right after birth and the cost of that treatment, along with future costs of life-long mental and physical health problems is skyrocketing.

There is now a class action law suit for children across Louisiana-born addicted. It was filed in St. Tammany because of the high number of affected babies there.

"We are asking in the lawsuit for damages for those financial burdens, as well as a life-long medical monitoring, so that issues such as developmental disorders, can be diagnosed and treated as they arise," explained Attorney Scott Bickford of Martzell, Bickford and Centola A.P.C.

The list of suffering is long and heartbreaking for the innocent victims of opioid addiction: problems eating, sleeping, they can be irritable, fussy, have seizures, convulsions, tremors, non-stop crying, life-long developmental disorders, heart and clef palate defects, anger and depression as teens, and like and like Keona, 40 percent are turned over for adoption because biological parents are incapable of caring for children, or are in prison, or dead.

"The problems been here for several years, maybe over the last 10 to 12 years it's been at it's worst. And it's not gotten better in that time. It's gotten worse," said

Dr. Brian Barkemeyer, a Professor of Pediatrics at LSUHSC where he is head of the Division of Neonatology and Medical Director of the NICU at Children's Hospital and Touro. He is not a member of the legal team.

The suit claims that mothers first became addicted when they were prescribed pain killers for a medical diagnosis. A member of team says the federal government has failed.

"The states are grossly lacking funding for this national priority. This is exactly why we are here today," said Dr. Bell.

Doctors say NICU nurses have to be specially trained for the unit, with some even getting addiction training.

"These babies stay in the hospital for two or three weeks, occasionally a little bit longer, and in that time they require sometimes intense care," said Dr. Barkemeyer

"We are at risk for losing an entire generation to opioids. Our babies and your kids and grandkids deserve much better," said Dr. Bell.

The legal team made a point to say if there is a settlement in the case, they don't want politics to dictate where the money goes. They want it to directly help the children by going to academics and research institutions, addiction treatment centers, nursing training, law enforcement, emergency and DEA agents and pill disposal, so teens can't get into parents' medicine cabinets.