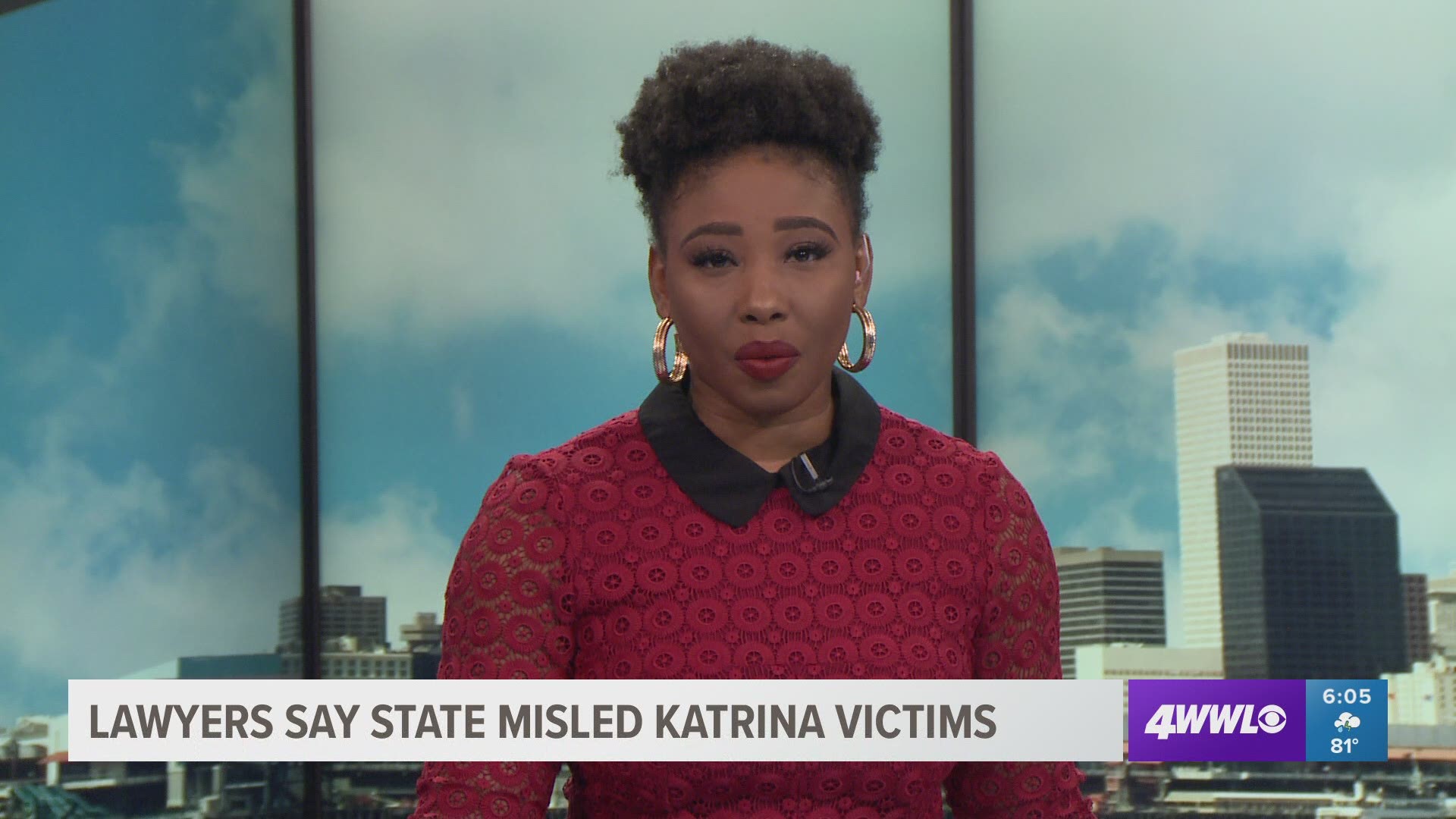 NEW ORLEANS — Legal experts believe the state of Louisiana made a huge error in the design of its signature housing program after Hurricane Katrina, and they say that mistake is causing the state to unfairly seek money back from honest grant recipients.

Lisl and Mark Antee, a New Orleans couple whose home was destroyed in the storm 15 years ago, are now being told to pay the state back $23,000 from their Road Home grant because they sold the empty lot at a reduced price and the new owners never rebuilt.

WWL-TV profiled the Antees’ case last week and three attorneys with extensive experience with the Road Home reached out to say the state is acting improperly and punishing the Antees for following the state’s instructions.

Davida Finger, an attorney at the Loyola Law Clinic who has helped low-income clients with Road Home grants since the program launched in 2006, pointed to state policies and guidance posted to the Road Home website that misled the Antees into believing they could sell their property and not be responsible for rebuilding on the lot.

WWL-TV showed a document posted on the Road Home website in 2007 that said a grant recipient could sell their damaged property and if the home isn't rebuilt and reoccupied in three years, the new owner would be “subject to the penalties… including repayment of the Road Home grant.”

Lisl Antee also said she was told by the Road Home adviser handling her grant that she should sell the house, assign the rebuilding covenants to the buyer and the covenants’ rebuilding requirements would transfer to the new owner.

“The Antees detrimentally relied on what the state told them to do,” said Stanley Cohn, an attorney who has successfully contested the state’s attempts to recover grant money from him and his clients. “It was kind of a typical situation I've seen so many times in the past where the state pursues honest people as opposed to the real culprit in the situation.”

RELATED: They're having trouble making ends meet and now the state wants $23,000 back in 4 months

Another attorney, Loyola Law Professor John Lovett, didn’t handle cases against the Road Home, but he specializes in property law. He said the Antees and others are in this mess because the Road Home’s covenants were flawed from the beginning.

“That was the property law mistake of the Road Home program to suggest that these obligations ran with the land because they really didn't,” Lovett said.

The state’s whole foundation for the Road Home was to tie grants to covenants “running with the land,” so whoever owned the property would have to rebuild and reoccupy the home. But Lovett said Louisiana’s unique legal code doesn’t allow for covenants that impose special requirements on property owners.

The state is now telling the Antees – along with dozens of other grant recipients it’s now suing in court to recover their grant money – that they are responsible for returning the money they got to rebuild and the new owners would be separately responsible to the Antees for failing to do what they promised when the Antees assigned the covenants to them.

Lovett said technically, the state is right: The Antees are the only ones with an obligation to the state, and Jerry Harris, who bought the lot from the Antees in 2008, has a separate obligation to the Antees. But he said the state misrepresented what would happen when transferring the Road Home covenants to a third-party.

“That did make it look like you are off the hook if you were transferring it to a third person, but it wasn't a contract,” he said. “It wasn't a legally binding release in which the state was agreeing to waive its rights to sue the original grantee if there was a transfer of the underlying property.”

Lovett and Cohn both said the state would have had to agree to each assignment of the covenants to a third-party, something it didn’t do in thousands of cases.

But Cohn said the state can take the responsibility off the Antees now by letting them assign their rights against the new owners back to the state.

“Pursue the real culprit in this case, the person who failed to meet the obligations of the Road Home covenant,” Cohn said. “And that way, the state achieves what it wishes to do. But in order to do that, the state would have to admit it made a mistake. And the state doesn't want to do that.”

Indeed, Pat Forbes, the longtime head of the state Office of Community Development, which oversees Road Home, would not admit the state erred when WWL-TV asked him about state policies and guidance that said grant recipients could assign the responsibility to rebuild to a new owner.

“I’d say that that understanding was quite clear, was made quite clear to anybody who entered that,” Forbes said. And again, there are very, very few people who wound up selling their home after receiving the grant.”

Forbes said most homeowners assigned their grant to a new owner before receiving the money, making for a clean transfer of responsibility to the state.

But court records show the state has filed dozens of lawsuits in Orleans and Jefferson parishes against grant recipients who sold their properties to people who didn’t rebuild.

Chris Szeto represents many of those homeowners.

The state says once it sues a grant recipient to recover the Road Home money, that defendant can name the new owners as co-defendants. But many, like the Antees, agreed to pay back the money before they were sued. The state’s hired collection law firm, Shows Cali & Walsh, told them last week that they had to start paying back almost $23,000 immediately or a lawsuit would be filed.

Lisl Antee said she was scared and made a first payment of about $5,000 on May 20. That could make it even harder for the Antees to claim “detrimental reliance” or assign their rights against Harris to the state. But Finger said the Antees shouldn’t lose out because they felt coerced into paying.

“The state officials need to step forward, need to do the right thing, need to recognize that after 15 years, this unpaid debt is not urgent and should now be waived,” she said. “And others in a similar situation should be treated the same."

RELATED: Louisiana to pay New Orleans for taking street for Champions Square, reopen to traffic in 2021