According to the Coast Guard, there are watertight areas of the boat where it’s possible someone could have survived. 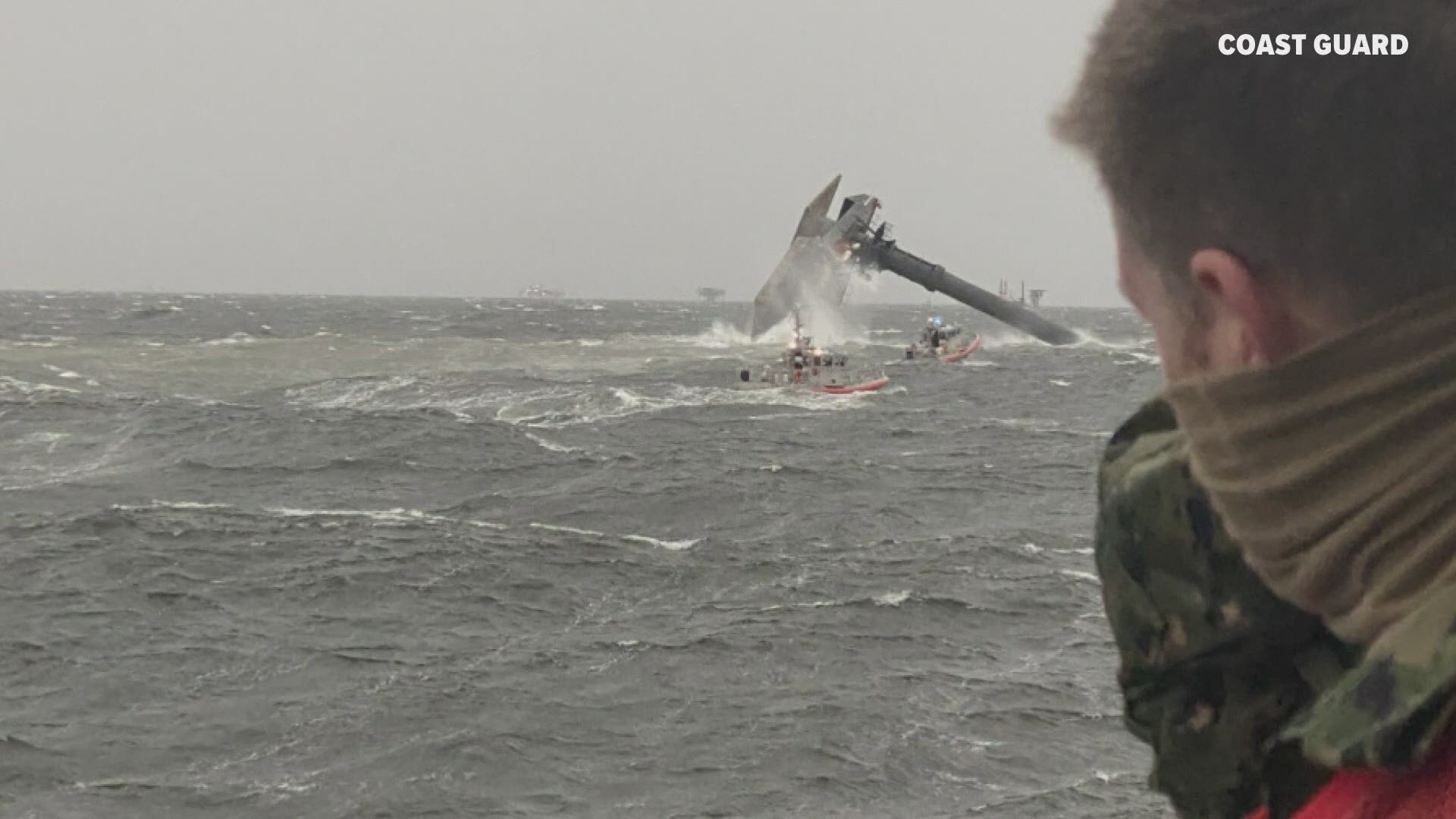 PORT FOURCHON, La. — The US Coast Guard is battling the elements and the clock as the search for 12 missing crew members from the capsized Seacor Power continues Thursday.

The Coast Guard is hoping for a break in the weather so they can send divers into the capsized vessel and search for any survivors who could trapped in the boat.

"With the weather permitting, we anticipate that divers may be on scene today to conduct operations in support of the ongoing search and rescue effort," John Michelli, public affairs specialist for the US Coast Guard, said.

According to the Coast Guard, there are watertight areas of the boat where it’s possible someone could have survived, but at this point they have no evidence to show that's the case.

What We Know So Far

One person was found dead and six people have been rescued so far, according to the Coast Guard Capt. Will Watson. Search and rescue operations are still underway for the remaining 12 crew members.

Authorities have not identified the 12 missing crew members or the one deceased crew member as of Thursday.

WWL-TV reporter Meg Farris spoke with Darra Morales, whose son Chaz Morales Sr. is a crane operator on the Seacor Power. She said that her son is not among the six people rescued.

Darra said Chaz was not supposed to be on the ship Tuesday. He had finished his two-week shift, but they needed help, and, with three children, he could always use the money.

The US Coast Guard and several good Samaritan vessels are assisting in search and rescue operations right now.

A Coast Guard Fast Response Cutter was on the scene within 30 minutes according to the USCG.

The following rescue crews are searching for the missing crew:

Capt. Watson noted that several civilians have reached out to offer their assistance both in the air and in the water.

Coast Guard search and rescue crews are hoping the weather calms down enough to allow a dive team to reach the capsized vessel.

On Thursday, wins were gusting around 30mph with rain falling. According to Meteorologist Payton Malone, the water will remain choppy today with 3-5 foot seas and the wind is expected to remain in the 25-30 mph range.

More storms are possible on Friday as well.

Capt. Watson confirmed that the capsized boat is the Seacor Power, a 129-foot commercial lift boat that left port around 1:30 p.m. and was headed for Main pass

Seacor put out a statement Wednesday morning saying they are working closely with the US Coast Guard.

"We are deeply saddened by the news of the vessel capsizing and are working closely with the US Coast Guard and local authorities to support all efforts to locate our valued team members and partners," The statement read. "We would like to thank the US Coast Guard and good Samaritan vessels for their immediate response as well as the brave individuals who have further supported our search and rescue efforts. Our hearts and prayers go out to everyone involved."

What is a lift boat?

Lift boats transform into offshore platforms. In the Gulf of Mexico, there are lots of these boats as they help support the oil and gas industry. According to Seacor’s website, the 129-foot Seacore Power vessel can work in depths up to 195 feet and has two cranes with 120-foot booms on each.

“They are mainly used for their cranes,” said Todd Michael, senior marine inspector for the U.S. Coast Guard. “It’s a big part of what they do offshore, lifting personnel, lifting goods, lifting offshore equipment onto rigs.”

The boat becomes a platform by dropping three legs down into the seafloor and those legs keep the platform steady while crews work.

“As those legs reach the seafloor, the platform begins to rise and those vessels can be stationary and do work offshore,” said Capt. Will Watson, with the U.S. Coast Guard.

Where was the Seacor Power going?

The Seacor Power capsized about 7 miles into a 100-plus-mile trip from Port Fourchon to an oil platform on the other side of Louisiana’s bird-foot Mississippi River delta.

Multiple sources with direct knowledge of the vessel’s business confirmed to WWL-TV that oil and gas company Talos Energy had hired the Seacor Marine vessel to shuttle equipment and other materials to a Talos oil platform in an area known as Main Pass.

The lift boat was on its way to provide additional space on the platform to perform work completing a drilled oil well.

According to WWL-TV's Chief Meteorologist Chris Franklin, winds hit upwards of 70 mph offshore with less wind resistance than a weather system finds on land. However, boaters we spoke with say winds reached around 200 mph during the worst parts of the storm.

Franklin said that a computer model estimated some wave heights at nearly 50 feet. A lack of buoys in that area prevents actual measurements and Franklin said that he thought that while the waves were very substantial, he doubted they hit 50 feet in height.