They're the humblest of heroes, but in a moments notice members of the Coast Guard will risk their own lives to save others. 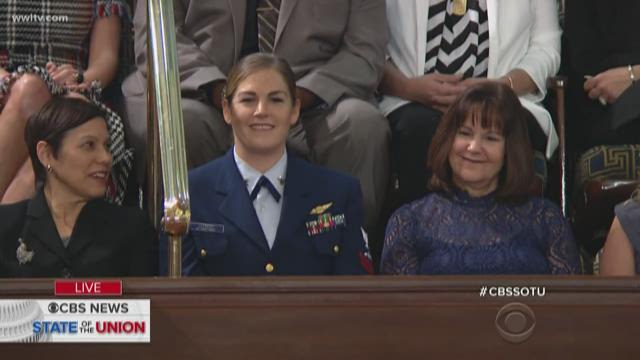 NEW ORLEANS - About 15 people from across the United States were invited as special guests to President Donald Trump's State of the Union address on Tuesday night. One of those people has ties to the Metro area. She's currently based in New Orleans with the United States Coast Guard.

They're the humblest of heroes, but in a moments notice members of the Coast Guard will risk their own lives to save others.

"You know we train so much for it, it becomes an everyday affair," said Lt. Andrew Breen. "We deploy for hurricanes and anything else that may come up."

One of those heroes, is Ashlee Leppert, who was invited by President Trump and First Lady Melania Trump to attend Tuesday night's State of the Union. Leppert was recognized for work during last year's busy hurricane season.

"In the aircraft she's top notch," said colleague Lt. Breen. "She's a professional, she's compassionate and caring and fun to be around and fun to work with."

Lt. Breen was one of Leppert's pilots during Hurricane Harvey. Their four-person team, was one of the first from New Orleans to fly to Houston to help rescue people stranded in the flood waters.

"Early Sunday morning, about 3 to 4a.m. we got recalled and we departed from here and flew to Houston," he said. "We pretty much landed and refueled, didn't shut the helicopter down, took off and started with different missions."

He says the conditions outside were dangerous, but they did whatever they could to get to those who needed help.

"Quarter mile visibility and just sheets of rain and strong wind," he described. "In order to navigate we found ourselves following roads and just looking down and having to weave between street lamps, buildings to avoid obstacles."

Each member had a specific role. Leppert, Lt. Breen says, was flight mechanic.

"We fly with four crew members: two pilots, a flight mechanic and a rescue swimmer," he said. "The pilots are both responsible for piloting and navigating the aircraft. The flight mechanic's job is to manage the cabin in flight and also in hoist. When we're hovering we can't see below us, so we need someone to tell us where to fly. The flight mechanic will keep us clear of any obstacles while deployed for rescue."

For several days their team and others worked around the clock pulling people from danger. As President Trump praised those actions, the humble hero graciously accepted the applause of a grateful nation. An honor also felt by others hundreds of miles away.

"It's fun that she's representing our unit like that," said Lt. Breen. "Everyone here is so deserving of that recognition, so to have Ashlee represent us and everyone who works from our unit in Houston and here, it's great."