Louisiana expects to quickly administer its first two weeks of coronavirus vaccine doses to health care workers within 48 hours of receiving the shipments. 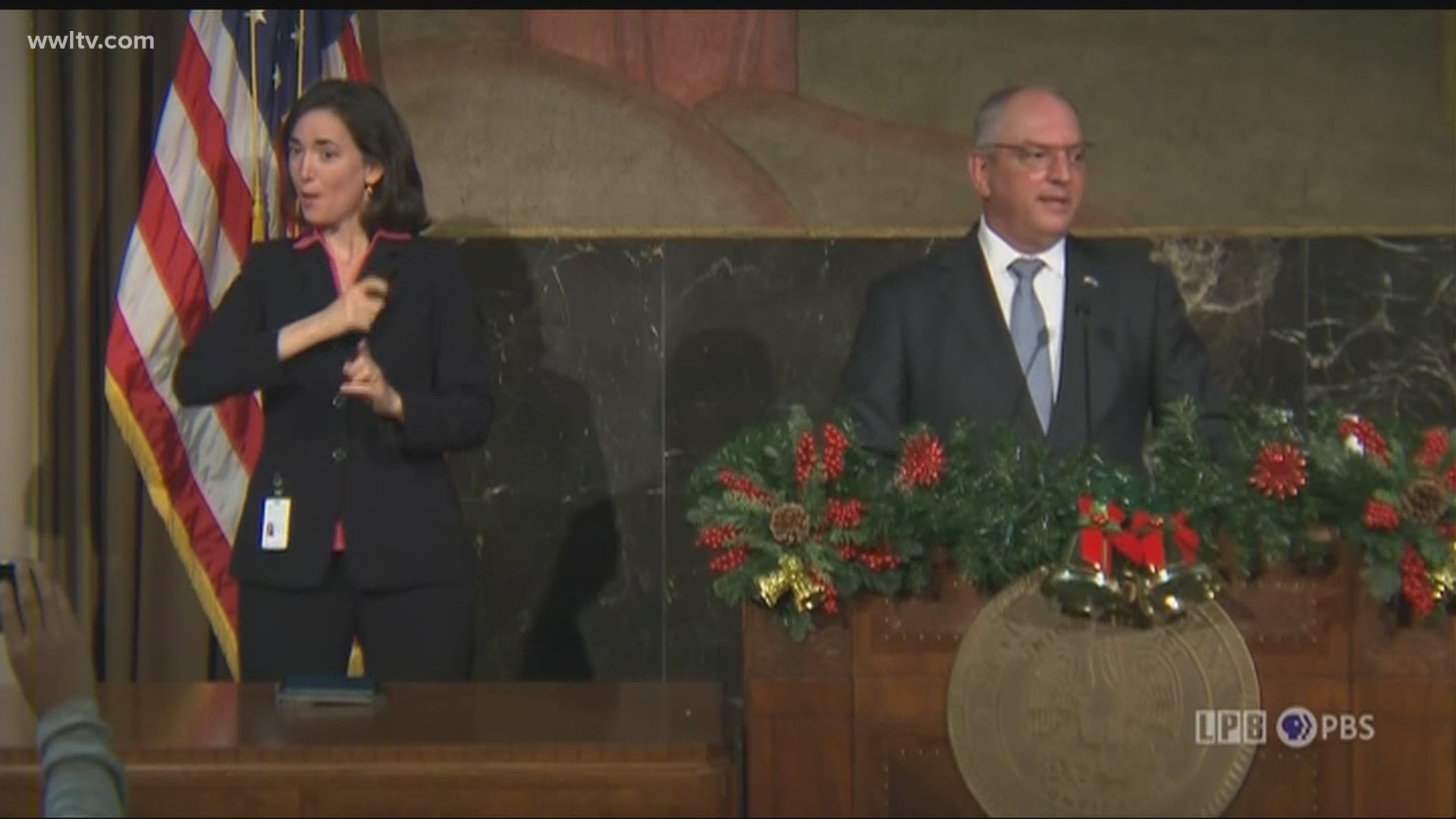 BATON ROUGE, La. — Meeting with other governors at a White House event Tuesday, Gov. John Bel Edwards said Louisiana expects to quickly administer its first two weeks of coronavirus vaccine doses to health care workers within 48 hours of receiving the shipments, which could begin this month.

Louisiana is holding weekly logistics discussions to ready for distributing and administering a vaccine and expects to receive 39,000 doses in its first shipment week and 40,000 vaccines the following week, Edwards said during a talk with three other governors at President Donald Trump's “vaccine summit.”

“States, we've been in the business of doing this for a long time” distributing vaccines, Edwards said. “It's not anything new. It's just at a scale that we don't typically have to do it at.”

Louisiana's governor was the lone Democrat during the livestreamed talk that also included governors from Tennessee, Texas and Florida. Edwards has been more conciliatory with the Trump administration than other Democrats, and his coronavirus response has won praise from the president and other White House officials. U.S. Health and Human Services Secretary Alex Azar, who moderated Tuesday's discussion, said the governors were chosen because their states' vaccine distribution plans were “real models for the rest of the country.”

As vaccine availability nears, the Edwards administration's plans for Louisiana’s first doses are coming into clearer focus, with a wider list of people eligible for the state’s earliest immunizations.

Edwards had said hospital workers, nursing home residents and nursing home staff will be the first in line for coronavirus vaccines. But those categories are slightly broader than initially explained, and the list easily exceeds the estimated doses Louisiana is expected to receive in its early shipments — particularly since each person must receive two vaccine doses several weeks apart.

No vaccine has been authorized for use in the United States, but the U.S. Food and Drug Administration is soon expected to allow emergency use of Pfizer's candidate. Moderna's vaccine also could be approved this month. If the FDA gives approval, there will be limited, rationed vaccine supplies before the end of the year.

Governors have the ultimate say on how the vaccines will be distributed in their states.

In addition to hospital workers who regularly encounter COVID-19 patients, Louisiana also will include EMS workers in that frontline category, according to the state health department. The hospital workers will be limited to facilities that have emergency departments, not every single hospital in Louisiana. Edwards said Tuesday this group of hospital and EMS staff will receive the first doses expected from the Pfizer shipments.

The category of nursing home residents and staff, which will be next in line for immunization, will encompass people who live and work in other adult residential care facilities as well, such as sites that house people with developmental disabilities and state-run veterans homes. Nursing homes account for more than 40% of COVID-19 deaths in Louisiana, according to state data.

The broader, complete list of Louisiana's earliest vaccine recipients matches recommendations from a panel of scientific experts that advises the U.S. Centers for Disease Control and Prevention, said Aly Neel, spokesperson for the health department.

The long-term care facilities have a combined 73,000 combined patients and staff, Neel said. The health department doesn't have a figure for the number of EMS and hospital workers who will be eligible for a vaccine in the first phase, but Neel said it's “tens of thousands” of people.

“Each one has been instructive because we realized we had some gaps that we needed to fill,” the governor said.

Since Louisiana's outbreak began in March, the health department has confirmed 6,363 Louisiana residents have died from the COVID-19 disease caused by the coronavirus. The number of people hospitalized with COVID-19 reached 1,516 Tuesday — more than double since last month and on track to exceed hospitalizations in the state's last coronavirus spike in July.

RELATED: 40,000 in Louisiana could be vaccinated in first week