No really, all of that happened in the moments after LSU's 22-21 win at Auburn, and by now we should probably not be surprised by any of it. 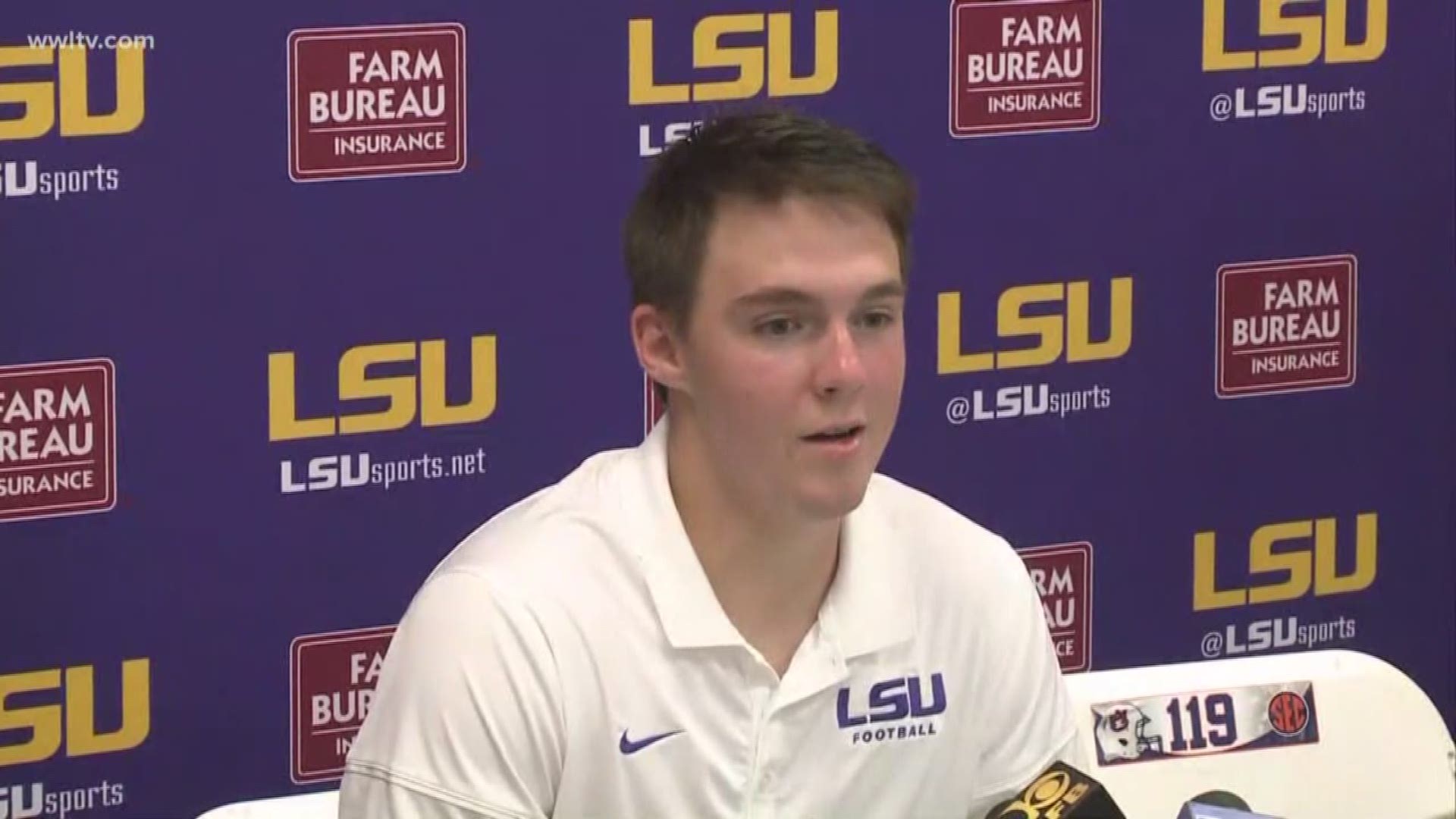 AUBURN, Ala. – It will probably always seem strange, but by now it’s become oddly familiar: Ed Orgeron barreling off the field after unexpected victory, bellowing “Go Tigers!” as only ‘Coach O’ can do. What seemed like an entire locker room singing along, behind closed doors, to Garth Brooks’ version of Calling Baton Rouge. A Louisiana state trooper, ostensibly guarding the visitors’ locker room door, suddenly throwing his head back and yelling at the top of his lungs:

No really, all of that happened in the moments after LSU’s 22-21 win at Auburn, and by now we should probably not be surprised by any of it.

Is anyone in college football off to a better start than LSU?

Nor by the graduate transfer who spent the last few years kicking field goals in the Northeast-10 Conference, and then on Saturday silenced a Southeastern Conference stadium with a 42-yard field goal as time expired – and then was carried off the field by his new teammates.

“That was a first,” Cole Tracy said, laughing. “That was cool.”

We certainly should not be surprised by the Tigers’ other graduate transfer, who spent the last few years standing on Big Ten sidelines, convinced he could make big plays if he got the chance. On Saturday, Joe Burrow was the difference, rallying LSU from an 11-point fourth-quarter deficit with one huge touchdown throw and so many clutch passes to extend the drive for the winning field goal.

“To know I can come out here in a pressure situation like that and perform really gets my confidence up,” Burrow said.

And after his performance, it’s time we all placed more confidence in this whole endeavor. LSU is 3-0, with signature victories against Miami (Fla.) and now on the road at Auburn. After winning an SEC West slugfest, Orgeron’s bunch will move into everybody’s top 10 this week.

“We feel good about ourselves right now,” Orgeron said. “We’ve felt good about this football team this whole time.”

But be honest. Even going into Saturday, what did you think?

LSU has a fierce defense. No news there. The offense remains clunky. Also not breaking news – though Auburn’s defense had a lot to do with the struggles Saturday.

But in Burrow, LSU finally has a steady, poised playmaker. His decision last May to transfer away from Ohio State to LSU qualifies, at least so far, as one of the biggest developments of the college football offseason. Suddenly, the Tigers’ potential seems so much higher.

She’d been standing outside the locker room waiting for her son. She said it like this: “Cuh-ray-ZEE!” And she meant everything, including the touchdown pass her son threw midway through the fourth quarter, a perfectly placed bullet deep over the middle into a bunch of traffic.

The ball found its way over a leaping linebacker and dropped into the hands of Derrick Dillon on the dead run. Seventy-one yards later, the Tigers were within 21-19. And even though the two-point conversion try failed, the momentum had clearly turned.

“It sparked us,” Joe Burrow said.

Auburn went three-and-out, and Burrow took LSU methodically downfield to win. The drive was aided by two pass interference calls that left Auburn’s coaches and fans furious, but Burrow also converted on third-and-long and fourth-and-long to extend the drive.

“He’s gonna fight,” said Orgeron of his quarterback. “He’s gonna make the right plays and not panic. He’s smart. … When you have a quarterback who can do that with athletes, you have a chance.”

The winning kick came from Tracy, who might have the only path to LSU that’s weirder than Burrow’s. He transferred from Assumption College in search of a place to make pressure kicks to impress NFL scouts. The school in Worcester, Mass., has already received a boost from his departure. Tim Stanton, a vice president at the school, texted Tracy earlier this week to wish him good luck, and told him Tiger fans had donated “over $500,” Tracy said – “so that was pretty funny.”

The whole thing is, really.

And this part of the story is familiar, but must be repeated: Orgeron, who was elevated from interim coach after the 2016 season, wasn’t really on the hot seat going into this season. But fans were uneasy after his decision to part ways with offensive coordinator Matt Canada – a splash hire he’d made as part of a promise to revamp and jump start the long sluggish offense – and promote longtime assistant Steve Ensminger.

It’s why the obligatory question came Saturday evening, at about the time the people in the other room were turning Garth Brooks into multi-player karaoke: Is this your biggest win?

“It’s not about me,” Orgeron said. “It’ll never be about me. It’s about this football team.”

But we heard you yelling in the other room, a reporter said, referring to a moment earlier when the words were unintelligible, but the speaker was unmistakable.

“I have the right to do that,” Orgeron responded. “And I’ll do it again. Next?”

But he smiled. Of course it’s about him. It’s always about him. But for this team, it might be more about Burrow, who provides the potential for this gloriously imperfect mash-up to morph into something beyond what anyone expected.

It’s all so crazy. It might be crazy good.