Efforts continue to contain oil spill off Huntington Beach; cause under investigation

Gov. Gavin Newsom proclaimed a state of emergency in Orange County Monday night to support the emergency response to the oil spill. 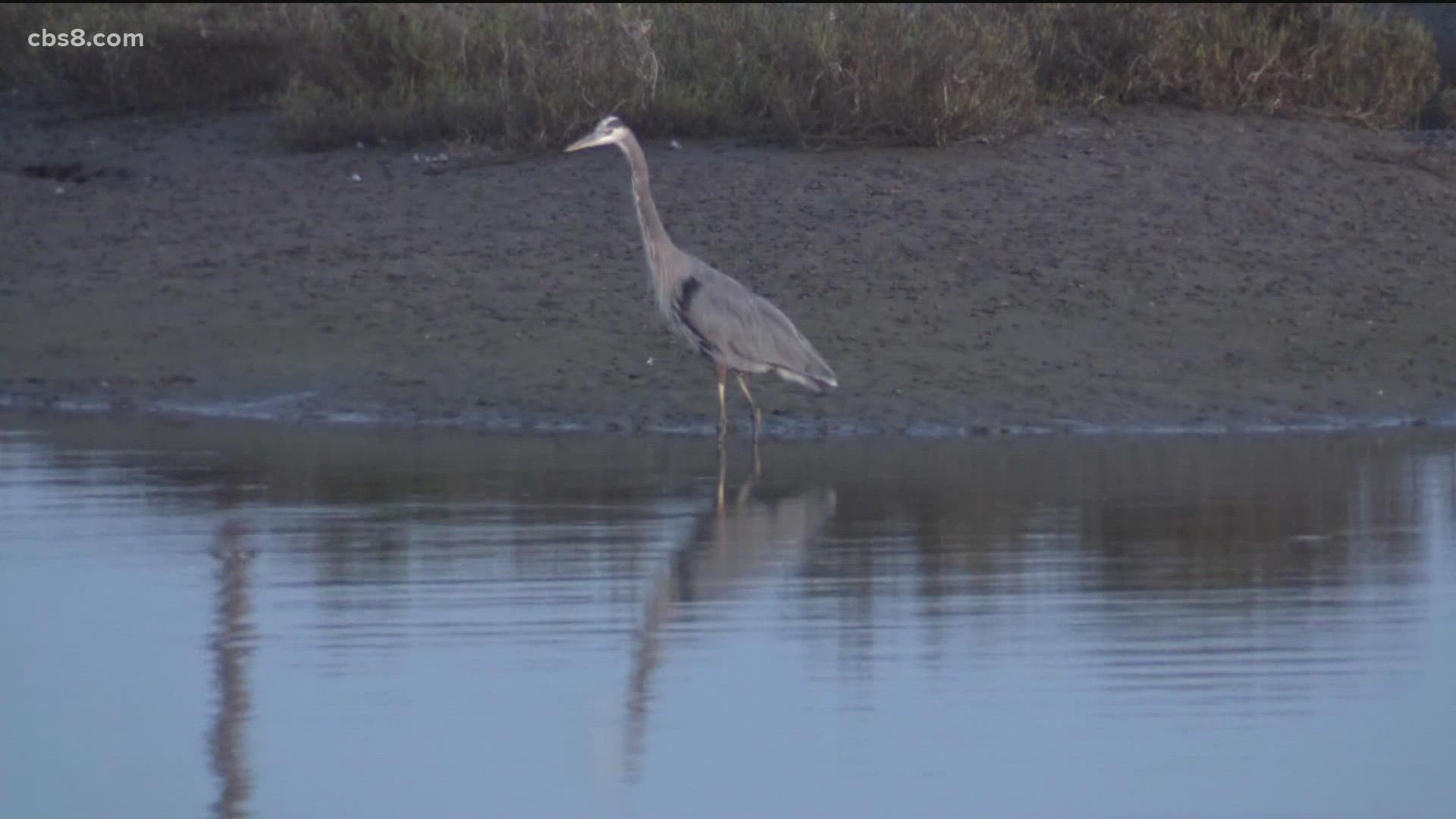 HUNTINGTON BEACH, Calif. — Efforts continued around Huntington Beach and beyond Monday to clean up a massive oil spill from an offshore rig pipeline that threatened the lives of fish, birds and other ocean wildlife, while threatening to keep visitors from enjoying the area for weeks or months.

Huntington Beach State Park was closed Monday due to oil in the water and washing up on the shoreline in the form of small tar patties. The tar patties varied in size and were scattered along the shoreline. The beach was nearly empty although some beachgoers ignored the warnings signs and continued walking along the beach. Lifeguards were heard over the loudspeaker asking swimmers to exit the water. There was no apparent smell of oil in the air during the day.

Authorities believe the leak could have spilled as much as 144,000
gallons into the ocean.

"I would characterize it as isolated ribbons of oil, or patches of oil," Ore said. "It's constantly changing."

Oil has been detected from Huntington Beach south to Dana Point and will continue flowing south with the current as it stands, with some already being seen in Laguna Beach, Ore said.

"It's not one large slick of oil covering this large area of miles," she said.

Martyn Willsher, president and chief executive of Houston-based Amplify Energy, parent company of the oil rig Elly, said his company plans to send divers down to inspect a pipeline "to verify what we're seeing" from Remotely Operated Vehicles, or ROV, scans in hopes of confirming a cause of the leak.

"We're moving very closely to a source and cause of this incident," Willsher said. "I wanted the divers to go down there to the area before we commented further. They will be down there this (Monday) afternoon... Until we get down there with the divers I'm not going to speculate (on the cause)."

There has been some speculation a ship's anchor may have caused the leak.

Willsher said there are no active leaks across the 8,000 feet of pipeline checked.

The spill was likely caused by a pipeline leak from a facility operated by Beta Offshore about five miles off the coast, officials said. There has been speculation that a ship anchor may have struck the line, and Willsher said that is among the possibilities being examined, but he declined to comment until a closer inspection is done.

About 4,158 gallons of oil has been recovered from the water and 8,700 feet of boom has been deployed to control the spread of the oil.

Five shoreline cleanup and assessment teams have been dispatched to assess beaches from Laguna Beach to Dana Point Harbor.

Justice Department officials and federal investigators are "investigating to determine if any criminal liability exists as it relates to the oil spill," said Thom Mrozek, a spokesman for the U.S.  Attorney's Office.

The spill was reported at about 9 a.m. Saturday, although some people reported smelling oil in the water late Friday. The Los Angeles Times reported that the state received a notification from an unknown source on Friday night about a sheen in the water. Amplify Energy did not report the leak to the state until about 9 a.m Saturday, saying it had occurred around 2:30 a.m.

Willsher and Ore said the first notification of something awry with the leak was made Saturday morning.

"This is absolutely unacceptable," Rep. Michelle Steel, R-Surfside, tweeted. "We need to know what actions were taken and why we weren't alerted sooner. We are facing a real crisis and I'll be requesting a full investigation."

Gov. Gavin Newsom proclaimed a state of emergency in Orange County Monday night to support the emergency response to the oil spill.

"The state is moving to cut red tape and mobilize all available resources to protect public health and the environment," Newsom said.

The spill drew a response from all levels of government.

Lt. Christian Corbo of the state department of Fish and Wildlife, said four oil-slicked sea birds have been collected. Three are being treated but one pelican had to be euthanized.

The state Department of Fish and Wildlife has ordered the closure of Southern California fisheries in response to the spill, prohibiting the taking of fish and shellfish from Huntington Beach to Dana Point.

Orange County Supervisor Lisa Bartlett said she was "not happy about" the leak, but added, "I do commend the state for taking prompt action along with the Coast Guard and local authorities. Everyone has been engaged, working collaboratively."

All of the beaches under the county's jurisdiction "have been closed as a precaution," Bartlett said.

Visitors to Newport Beach will have access to the sand, but not the water, city spokesman John Pope said.

Seal Beach's beaches remain open because officials say the oil slick has not affected their shores.

County officials want to keep the beaches as clear as possible for first responders to access the area. She said county officials will consider a disaster declaration at Tuesday's board meeting.

Bartlett said the leak doesn't just have "an impact on tourism, but an impact on sea life and water fowl."

She said some business leaders believe that off-shore oil drilling can keep down the price of gas, but, she added, "How do we balance the environment versus business interests. I understand all sides of the equation, and so very difficult decisions have to be made."

Orange County CEO Frank Kim said county officials on Monday have been focusing on getting the word out to residents to stay away from the beaches and for boaters to steer clear of the oil-slicked water. They don't want boats to spread the oil around, and water craft that drift into the oil needed to be cleaned by certified companies that can do so in an environmentally safe way, Kim said.

Kim said county officials want to see a stepped-up response from the state.

"I just want to see an overwhelming response. I haven't seen it yet, but our desire is to see it sooner rather than later."

Huntington Beach Mayor Kim Carr described the situation as a "potential ecologic disaster," and said some of the oil had reached the shore and was impacting the Talbert Marshlands and the Santa Ana River Trail.

"Our wetlands are being degraded and portions of our coastline are completely covered in oil," Carr said Sunday.

Carr said the beach closures could last anywhere "from a few weeks to a few months."

Health officials warned people not to swim, surf or exercise by the beach because of the potential health hazards. People were also urged not to fish in the area since the waters are considered toxic.

The California Department of Fish and Wildlife set up the Oiled Wildlife Care Network hotline, at 877-823-6926, for people to call if they see wildlife impacted from the oil. Members of the public were urged not to approach any animals themselves.

People whose boats sustain oil damage were asked not to clean the boats themselves since they could spread the oil, but to contact county officials who could refer them to the proper channels for possible reimbursement of cleaning expenses.

A claims number was established for any people or businesses who feel they may have been affected by the incident at 866-985-8366 (reference Pipeline P00547).

The spill caused Huntington Beach on Sunday to cancel the final day of the Pacific Airshow, which drew hundreds of thousands of people to the shore on Saturday.

The spill occurred in federal waters at the Elly platform, built in 1980 to process crude oil from two other platforms, which draw from a large reservoir called Beta Field. Houston-based Amplify Energy Corp. is the parent company of Beta Offshore.

Elly is one of three platforms operated by Beta Operating Co., which also operates Ellen and Eureka nearby. Elly processes oil production from Ellen and Eureka and is fed by some 70 oil wells. The processing platform separates oil from water.

Elly is one of 23 oil and gas platforms installed in federal waters off the Southern California coast, according to the Interior Department's Bureau of Ocean Energy Management. Besides Elly, a processing facility, there are 20 others that produce oil and gas, and two are being decommissioned.

The potential source of the oil leak is about 4 1/2 miles off the coast, along the 17 1/2-mile pipeline to shore, where it is delivered to a local refinery, Willsher said at a briefing Sunday afternoon.

The offshore platform system has been linked to earlier leaks, including a 2,000-gallon spill that led to a $48,000 federal fine against the operator for improper calibration of a leak-detection system. The corroded pipeline carried oil, water and gas from Eureka to Elly, the Los Angeles Times reported about the 1999 incident.

Regarding the Saturday spill, "Workers moved to shut down the pipeline and used pressurized equipment to retrieve as much oil as possible soon after the incident was reported at 12:18 p.m.," Kate Conrad of Beta Offshore told The Times.

Willsher said the company's complicated processing operation was shut down entirely for now.

"The effects of oil spills on humans may be direct and indirect, depending on the type of contact with the oil spill," Chau said.

"People may come in direct contact with oil and/or oil products while walking in a contaminated area (e.g., beach). An initial irritation will be obvious. Additionally, contaminants may be absorbed through the skin. Even when an oil sheen may not be visible, dispersed and dissolved oil contaminants may exist in the water.

"Please contact your family physician or call 911 if you are experiencing adverse symptoms. Currently, we are asking residents to please refrain from participating in recreational activities on the coastline such as swimming, surfing, biking, walking, exercising, gathering, etc.," the statement continued.

The spill was reminiscent of another ecological disaster decades ago. An estimated 3,400 birds were killed when the American Trader oil tanker ran over its anchor and punctured its hull on Feb. 7, 1990, spilling an estimated 416,600 gallons of crude oil off the coast of Huntington Beach.

As a result of the spill, the Wetlands and Wildlife Care Center was established March 31, 1998, at 21900 Pacific Coast Highway to help injured and orphaned wildlife including oil-soiled birds. A makeshift facility at that site treated birds injured in the 1990 spill, according to the center's website.