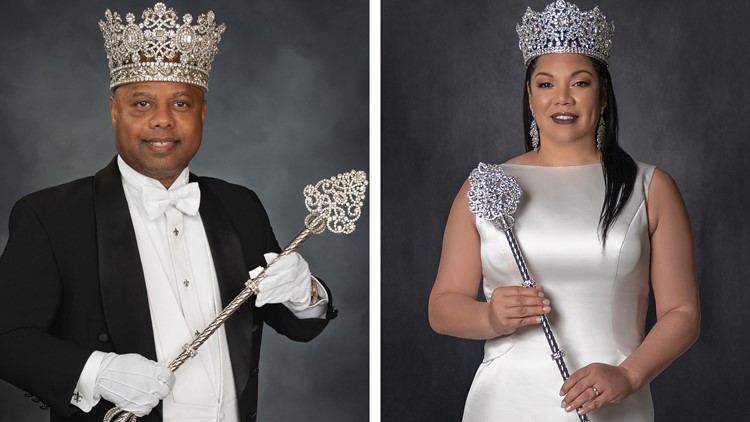 Brian Sims and Dr. Chanda Macias are ready for the ride of a lifetime as King and Queen Zulu on Mardi Gras morning.

Sims, a 24-year member of the Zulu Social Aid and Pleasure Club, said his Zulu connections date to his teenage years, when he worked sanding and painted Zulu coconuts for club members.

"It's been great, it's been a whirlwind leading up to this time from my election last May up until this point. It's been something I've been waiting for for 24 years," he said.

Sims was elected by krewe members as the Zulu king this past year. As is tradition, the king is allowed to select his queen and in Sims' case, he chose his friend and colleague, Macias. Both work in the health care and biotech industry.

"It's been really exciting to be a part of this. To be able to experience this has just been priceless," Macias said.

Sims has served on a number of Zulu committees and served as “Big Shot" in 1998, playing the role of one of the beloved Zulu characters. He is also a former Coronation Chairman, overseeing the Zulu Coronation Ball. He is serving a second term on the Zulu Board of Directors and served on the Zulu on the Bayou Committee which helped present a Mother's Day event on Bayou St. John co-sponsored by WWL-TV and designed to highlight anti-violence efforts in the city.

Sims is currently employed with a biotech company as a Medical Sales Territory Manager. He attended Warren Easton Fundamental Magnet High School, where he graduated in 1989. He also earned a degree in business management from the University of Phoenix.

He is the father of two sons and a member of Franklin Avenue Baptist Church and the political group BOLD, the Black Organization for Leadership Development. He regularly volunteers with SOY, LLC (Supporting our Youth).

Macias recently moved back to Louisiana after several years in the Washington, D.C. area. She has family roots here as a member of the Guillory family originally from Opelousas.  The daughter of a military veteran, her childhood was spent between Louisiana and Prince George’s County, Maryland.

Macias attended Howard University, where she majored in biology and minored in chemistry. She earned a Bachelor’s of Science degree and graduated with honors.

She went on to earn a Ph.D. in cellular biology, extensively studied cancer  and evolved into developing a model to understand the mechanism of how prostate cancer metastasizes to bone.

After time in the private sector, Macias became the director of STEM Education in the College of Engineering, Architecture, and Computer Sciences at Howard University, where she was awarded millions in federally-funded grants.

She also earned an MBA from Rutgers University in Supply Chain Management.

She is currently the CEO and owner of a cannabis and hemp healthcare enterprise and marijuana dispensary in Washington D.C.  She is also licensed as one of two medical marijuana growers in the state of Louisiana.

She is married with four children.