Neighbors are now urging the city to crackdown on illegal dumping in Algiers and to help catch those responsible. 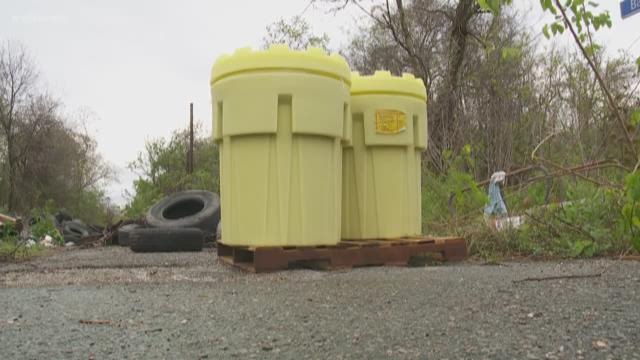 ALGIERS – Neighbors near the corner of Bailey and Adrian are mad about chronic illegal dumping, especially after two 50-gallon containers of apparent dangerous chemicals ended up in the dump.

They are not sure when the barrels of methanol were dumped, or who is responsible for putting their families at risk.

“They said it was highly toxic and explosive,” resident Augustine Cook said. “Why would you put something like that in the neighborhood? Why would they dump this around here?”

Augustine Cook and her daughter Cassandra live next to the dumpsite.

“I am very mad about this because they have kids all around here. The play all around. They play in here,” Cassandra Cook said.

Last week, neighbors spotted barrels in a drainage ditch on the side of the road under piles of tires and other debris. The New Orleans Fire Department placed the barrels into two plastic containment drums and put them on to a pallet for removal.

The fire department determined the barrels were sealed and had not leaked any of its contents.

However, neighbors want to know why the city did not immediately remove the containers.

“They said somebody's going to come and pick it up. That's been a week,” Cassandra Cook said.

Sanitation crews showed up to remove the debris shortly after Eyewitness News reported the illegal dump site to the mayor’s office. A hazardous waste contractor was hired to haul away the methanol.

Neighbors are now urging the city to crackdown on illegal dumping in Algiers and to help catch those responsible.

“It's real scary. We've got kids, grandkids and nobody don't want to do nothing,” resident Weldon Ruffins said.

"We need some cameras up here. They need the city to take action,” resident Augustine Cook said