Since the S&WB started using the Cogsdale billing software in October of 2016, it has received nearly 30,000 complaints from customers about problem bills. 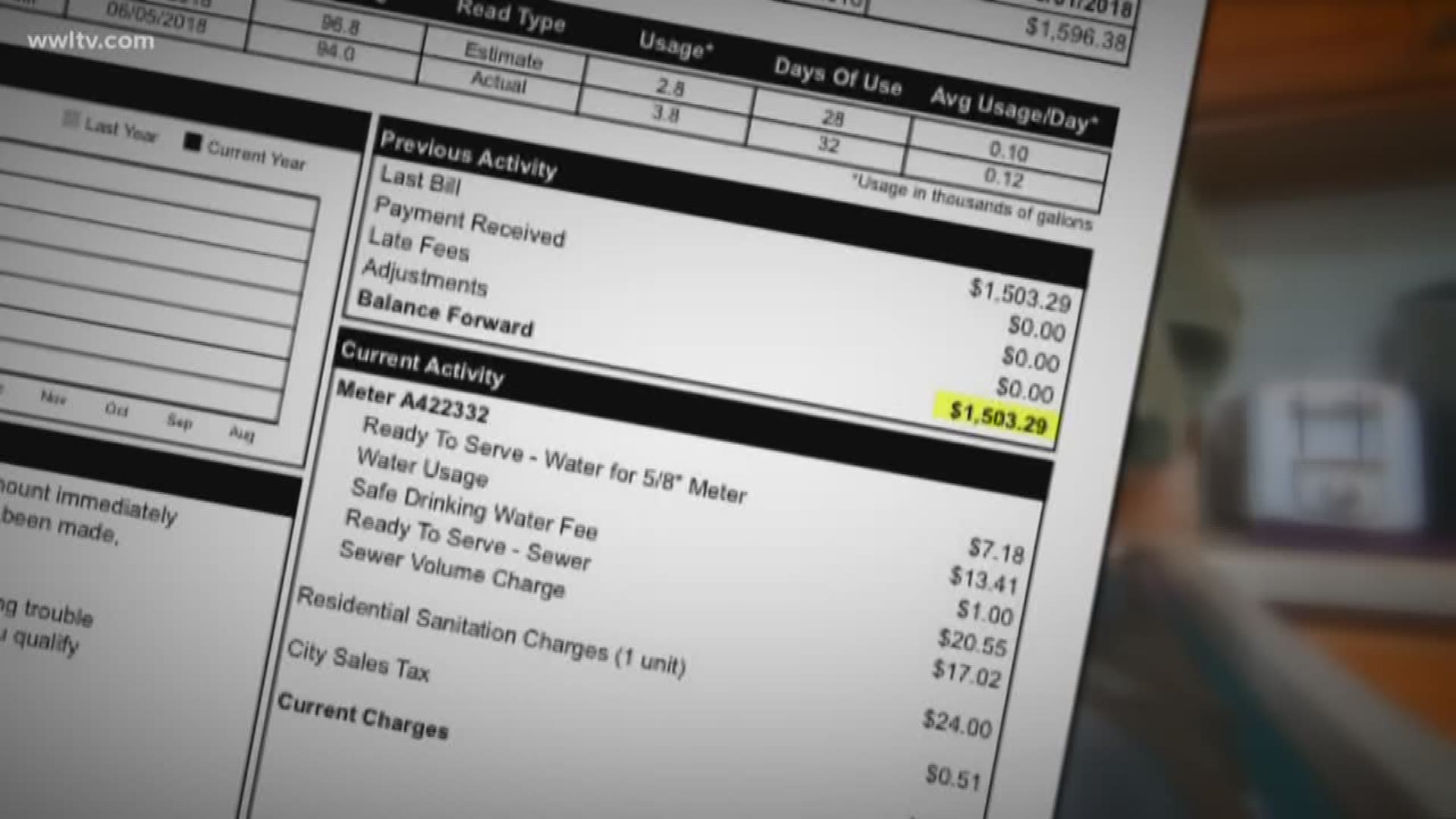 NEW ORLEANS -- A $10.2 million software program that was supposed to provide improved accuracy in estimated billing instead compounded problems with bad bills many people have received from the Sewerage and Water Board of New Orleans, according to sources close to the problem.

A look at dozens of problem bills revealed the Cogsdale billing software being used by the S&WB may have considered usage amounts from bad bills when calculating estimates, something a S&WB systems analyst confirmed when testifying before the City Council’s Public Works Committee last week.

“If you had a bad read, the month before and that is a part of your estimation method, then your estimate will be high. So, that is the reason we went to 100 gallons a day,” Tiffany Julien told the committee.

The utility made the change in May, reverting back to the flat-fee estimation formula it had used before implementing the Cogsdale billing software.

Former Interim Executive Director Bob Miller, who headed up the software project, said he instructed the team working on it to choose a formula the new billing system would use that considered a person’s past bills when estimating their water usage.

But problems with bad meter reads, lapses in billing that have stretched on for months and a heavy reliance on estimates, for some customers, month after month, compounded the issues the software had generating reasonable estimates, the sources said.

And that left water customers like Lauren Ward with disputed accounts a year after she first moved into her Uptown apartment.

“We did not get a bill for six months. We moved in here Aug. 1, we got our first bill in January,” Ward said.

And when that first bill arrived, it was a whopper estimating what her family of four used for six months at 31,000 gallons.

But Ward's billing problems didn't end there. Two months later, in March, the S&WB charged her for using 19,300 gallons of water. That's the amount of water in an average size swimming pool.

Ward and her family live in a three-bedroom apartment.

“We don't have a swimming pool, we don't run any excess water, we're not bath takers, we take showers, as we were mentioning, we don't drink the water for concern of lead contamination and other bacteria that are in there,” she said.

On Ward’s bill, a small bar graph that illustrates monthly usage shows the family’s six months of water usage in one month, January, when she finally received a bill. And her bill indicates that is how the S&WB computers saw it too. The billing software may have used her sky-high bill from January to calculate her average daily usage and to estimate her usage in March.

Ward’s partner filed a dispute for the January usage and was informed two weeks ago that they S&WB found no errors on its part, telling Ward she owed $1,587 for the year’s worth of water and sewer service.

They asked for an administrative hearing to get the utility to re-examine the March estimate.

But Ward's bills aren't the only ones that show estimates that factor in past problem bills.

Wanda Jones owns a duplex in Central City. Half of it has been under renovation since Hurricane Katrina in 2005.

Jones said since that time, it has not been possible to use water on that side of the duplex with capped lines, no sinks, no faucets and no toilets.

In January of 2017, a broken meter led the S&WB to charge Jones for using 900 gallons. Her bills indicate she got a credit on a future bill for that usage.

But five months later in June, that bogus bill appears to have affected her account again as the computer used it to estimate her usage.

She was charged for a small amount, but in reality, Jones said that amount should have been zero.

“That's the only thing that's killing me: these estimates,” she said.

Last year, records show a quarter of all the bills the S&WB issued were based on estimated usage.

Roger Colton is a consultant who works with utilities across the US and Canada on poverty and access issues.

In January and February of this year, the records show the S&WB’s estimated billing rate topped 52 and 53 percent, meaning it sent out more estimated bills than bills based on actual meter reads.

“One of the fundamental duties, or fundamental obligations of a public utility is to determine the consumption that you have made and to bill that consumption. And when you're billing 10 to 15 or more percent of your customers on estimates, and particularly, consecutive estimates, then that is a lack of reasonable performance,” he said.

That poor performance at the beginning of the year corresponded with a spike in the number of complaints from customers about problem bills in March. The utility’s website attributes the spike to the hard freeze in January, when people had pipes burst and ran water around the clock to avoid just that. But it’s also the same time people would have been receiving high numbers of estimated bills.

Since the utility started using the Cogsdale billing software in October of 2016, it has received nearly 30,000 complaints from customers about problem bills.

As of May, if the meter can't be read, New Orleans customers are getting billed for using a flat 3,000 gallons of water. That’s the monthly average for a one-person household in the US, according to the US Geological Survey.

The S&WB suspended its normal collection process for nine months this year while it worked on the billing debacle, but the leadership of the utility said that process would resume Aug. 1, including shutting off water for non-payment.

While the New Orleans City Council urged the S&WB to hold off until the billing situation was more stable, Mayor LaToya Cantrell, the President of the S&WB, said she supported moving forward with collections.

But shutting off water can have serious consequences, according to Colton.

“In Philadelphia, for example, the shut off of water and sewer service is the single biggest reason that kids get removed from the home because the home is uninhabitable,” he said.

The board has said 17,000 delinquent customers whose accounts are not in dispute are at risk for having their water shut off.

Until Tuesday, that number included Ward.

Two weeks ago, she received the investigation resolution letter saying the board didn’t find it is responsible for the sky-high estimate at the beginning of the year.

The utility stopped using the Cogsdale calculations for estimates in May, the same time that Ward's bills went closer to normal.

Ward appealed for an administrative hearing on her dispute this week, which keeps her water on, for now.

The former interim Executive Director of S&WB, Marcie Edwards, who has experience at the helm of multiple water utilities said in May, “Bill estimation is an art form and there is, frankly, no utility that likes to do it, so we need to get to a point where we're not.”

Consumers have no choice in where they get their water.

“Water is the one essential service,” Colton said.

Hiring additional meter readers has let the utility make great progress boosting the number of meter reads in the last three months with just 8 percent of bills generated from estimates in June. But the current interim Executive Director, Jade Brown Russell told the city council committee, “I'm gonna be very frank and honest on that. That's where we need to get is to read meters every month for every customer.”

Board spokespeople did not respond to a request for an interview for this story.

They said in a press conference this week that if customers have had a high bill, and a subsequent high estimate, they should dispute each of their problem bills.