"I’d heard about it through social media. Somebody jokingly called it a “king cone.” You know, like King Kong," New Orleans Photographer Chris Granger told Slate. 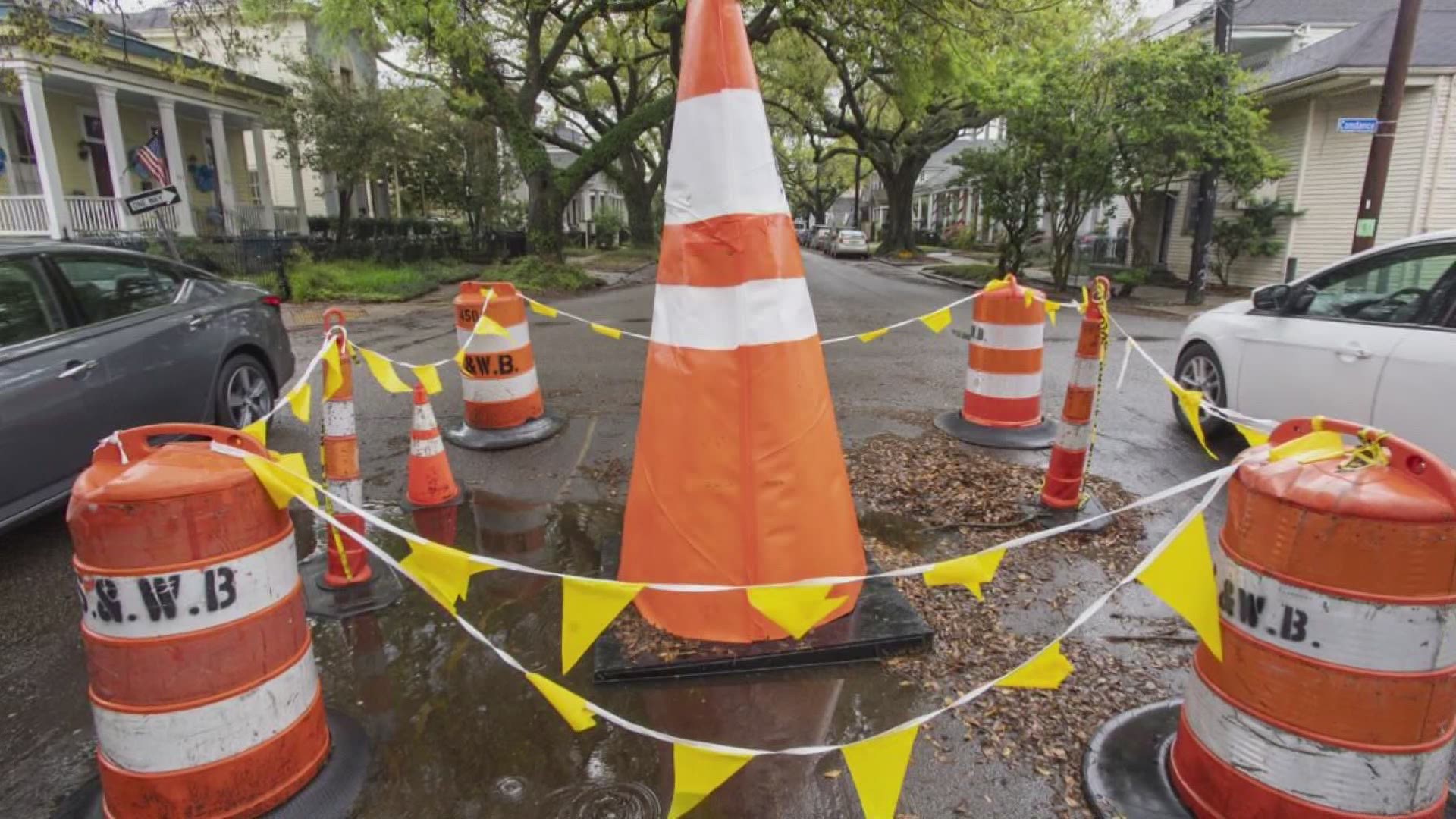 NEW ORLEANS — It's been about a week since an 8-foot tall traffic cone appeared at the center of a pothole in the Irish Channel, but the artwork referred to as "King Cone" has proverbially disappeared from the Earth — until Easter Sunday, when it was resurrected.

A Magazine Street apparel shop that sells T-shirts with a New Orleans attitude seems to be the first witness to King Cone's reappearing with a set of angel wings, a crown of thorns, and what looks like  a cardboard "stone tablet."

Dirty Coast posted photos of the cone on Facebook on Easter Sunday morning, amusing many New Orleanians who rejoiced online.

Our partners at the New Orleans Advocate | The Times-Picayune reported on the initial arrival of the great cone about a week before Easter, and that's how it all began.

A local online satire and parody publication published a story about the cone as well, but we'll keep things factual on WWLTV.com. If you want to see the fake article about the cone's chances at running for mayor, click here

The most popular King Cone post in the Reddit community was published to the page the day before it went missing — no joke — on April Fool's Day.

The post titled "Mega Cone now has a mini cone hat" by user StudioSixT got 48 comments and 807 upvotes, as of Easter Sunday.

Mega Cone now has a mini cone hat from NewOrleans

A r/New Orleans community member who used added the flair "Prophet of the One True Cone" to his posts was awarded Reddit Gold for his comment on the same post.

"Its power grows every day. Make your penance lest ye be cast into the infinite pothole when the day of reckoning arrives," user TacosArePeopleToo said.

New Orleans residents on Reddit's community r/NewOrleans engaged a series of posts about the cone.

"I thought we were calling it M E G A C O N E," Reddit user causewaytoolong said in a comment on a post that called it Coney McConeface.

Another Reddit user saw the cone as a possible opportunity to make a living during the pandemic.

"I’m genuinely surprised that some clever (person) has not yet developed a pothole bike tour and is pulling in $2,000 a week," Reddit user nicashade said in a comment on the same post. "If more people celebrate and decorate their local potholes, this could bring outdoor pandemic safe jobs to the city."

Sewerage & Water Board Director of Communications Courtney T. Barnes told the New Orleans Advocate | The Times-Picayune she was only aware of three standard S&WB traffic cones there.

“There is currently no open Sewerage and Water Board work order at the corner of the Washington Ave. and Constance Streets,” Barnes said. “In this instance, we received a call from a concerned customer for a depression in the street and according to the inspector notes, ‘three cones were left for protection.’ That is why you see SWBNO-branded cones.”

WWLTV.com can't confirm when exactly King Cone was removed from its place at the center of a shallow pothole large enough to make cars drive around it in the middle of a New Orleans intersection.

However, members of r/NewOrleans seemed to stay positive.

"I hope that means we’re about to see a post saying it’s on the pedestal at Lee circle," user causewaytoolong said in a comment.

User the ninjaDuck128 saw the void left by King Cone as a prompt for bigger and better things.

"Time for a larger cone?" the user asked.

User 60andpregnant echoed the sentiment in his comment: "This is what I'm thinking.

The online community of New Orleans on Reddit, for locals not for tourists, mourned King Cone, remembering it with a memorial.

Flowers, baby angels, and a makeshift headstone were placed on one of the S&WB's orange cylinders near the original pothole, a photo shows.

Miraculously — or mysteriously, Easter Sunday in New Orleans brought back what seems like a stand-in for King Cone. White, gray, with chrome stripes, and angel wings.

With it was a message, you can read it in the photo below.

King Cone's story has reached a larger online audience thanks to a story by Slate magazine, which interviewed longtime Times-Picayune photographer Chris Granger.

Granger told Slate about King Cone in his interview.

"I’d heard about it through social media. Somebody jokingly called it a 'king cone./ You know, like King Kong," Granger told Slate. "I was driving near that intersection and glanced down the street and saw this bright pyramid-looking orange beacon several blocks down. It was funny timing because one of my editors reached out to me and said, 'Have you heard about this cone? We should go check it out.'”