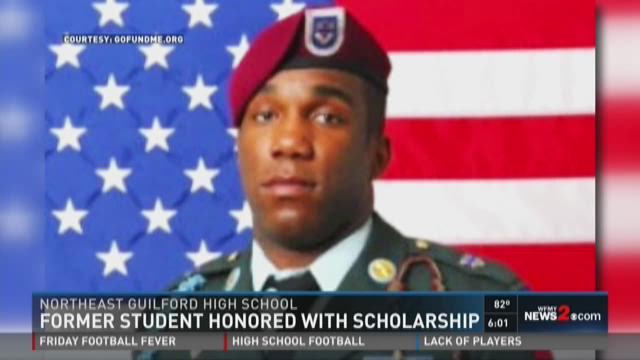 GUILFORD COUNTY, NC – Friday is football night and many Triad schools are celebrating their Homecoming on the final night in September.

For one school, though, the football game won't be the only highlight.

Northeast Guilford High School will present the David Hickman Scholarship on Friday to help a deserving student-athlete go to college.

Army Specialist David Hickman was captain of the Northeast Guilford High School football team before he graduated in 2006 and became a hero for the U.S. Army.

Hickman was the last U.S. Service member to die in the Iraq war.

Hickman was killed in Baghdad when a roadside bomb ripped through his armored truck while he was on a police-type patrol.

He was a member of the 82nd Airborne Division.

Before he joined the Army in 2009, Hickman graduated Northeast Guilford High School in 2006.

“David Hickman started this trail along time ago. We are looking to continue that with young men and young women that exemplify what leadership is and have the ability to go represent Northeast Guilford High School and Guilford County,” said Lippard. “So I think it's a big deal for our community.”

Hickman's friends, family, and supporters created this scholarship to help a student athlete who exhibits the same brave and honest leadership qualities that Hickman once showed.

As a captain of the NEGHS football team, Hickman led the Rams to many wins on the field.

"We wanted to kind of give him his own special day,” said Lippard. “We feel like all the stuff that David Hickman has accomplished in his service career exemplifies what we look for in our students and our student athletes.”

The winner of the scholarship is Lance Thompson. It was announced between the 3rd and 4th quarters of Northeast Guilford High School’s game against McMichael High School on Friday night.

If you want to learn more about David Hickman's story or to support his scholarship, click here.