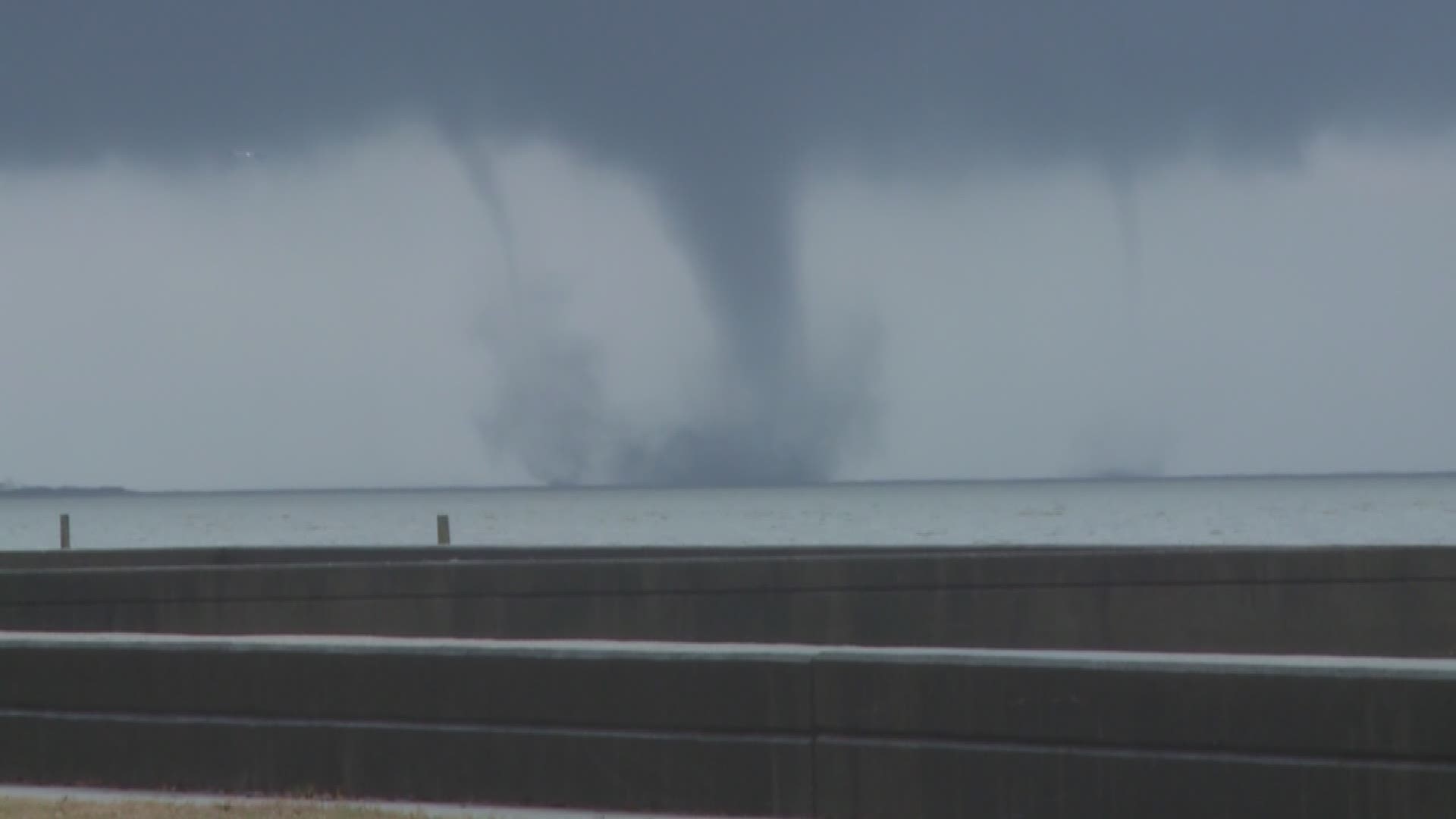 The “once in a career“ weather feature was captured on live television by me and Ashley Rodrigue from Mandeville on Lake Pontchartrain on Feb. 23.

As the severe weather system approached we were monitoring the disturbance in the field. While forecasters and viewers were observing data on a radar screen from the National Weather Service, Ashley Rodrigue and I were reporting from the most western part of the Mandeville seawall when we witnessed a unique phenomena of nature - a tornadic waterspout.

To see such a unique event as it develops and unfolds in front of you is amazing. But, to transmit the event for live television so others in our viewing area are able witness the severity of the approaching weather system was a combination of situational awareness, being prepared to react to such an event, and luck.

Just a little after noon the unstable weather system came out of the southeast over Lake Pontchartrain circling in from Kenner where it had already caused damage.

I began setting up for our second live shot for television when I realized a large dark cloud seemed to fill the horizon. A small cone was starting to protrude near the middle of the weather system. Over the years I have
seen many waterspouts on the lake while fishing, but this one appeared different from the others.

I called out to Ashley to have our station take my picture live. She contacted them and related what was unfolding in front of us.

The producers were monitoring our images from the lake and quickly took it live. In a matter of seconds a thin cylindrical line, usually associated with a waterspout formed from the dark cloud down to the lake, then it broaden into a large cone shape. A few seconds later the conic shape grew larger, darker in color -- the base seemed to be churning much more water. The cone was getting larger through my lens. The system was advancing in our direction. All of this unfolding in front of us while I was filming for live TV. Amazing. I was in
awe of the event unfolding in front of my lens as I transmitted theses images back to the station on live television.

Then all of a sudden another small waterspout formed off the southern edge of the large conic waterspout. The larger conic waterspout, at this time, was growing into a very broad and much darker image. Though my lens the waterspouts seemed much closer then someone just looking at the fascinating image from the Mandeville seawall.

There were now three waterspouts developing in the lake as I captured the images with my camera and on live television. Because I was transmitting this weather event live, and the technical staff back at WWL-TV responded so quickly, it caught our on-air talent a little off guard. They initially reported it as a pre-recorded feed, but when they realized it was live they responded just as I did while capturing it, they were simply amazed. The entire event lasted just about three minutes, unusually long for a waterspout I thought to myself. But then again, there were three waterspouts.

Later that evening, around 5 p.m., Ashley and I actually drove through the intense rain, hail and very dark clouds of another tornado in the Lacombe area. Ashley reported on that experience as we punched through the system.

“What was unusual for us was the power of the weather system that came through our area yesterday that was the big story. And the severe weather that it produced -- a particularly dangerous situation. We were definitely expecting tornadoes and that is what transpired. Getting into a little meteorologist semantics here, a tornado is what we describe as a funnel that is contact with the ground. When it is over the water traditionally we refer to it as a waterspout. Traditionally waterspouts in our area are usually weak. They occur in the summertime and they usually occur around daybreak. This is anything but weak. I call it a tornadic waterspout to add emphasis that the processes that generated this tornado over water were much, much different then what you would see in summertime. This is something that had a lot more structure, a lot more concentrated lift, that not only produced the waterspout, but it essentially produced something that was stronger than normal, bigger than normal. Something that lasts longer then we would expect a typical waterspout. Tornados, such as this last much, much, longer. Meteorologists may spend their entire career seeing maybe one of these, if that,” Koziara said.