Tangipahoa Parish School Board member Mike Whitlow later deleted the post and apologized, but not before other Facebook users took screenshots of it. 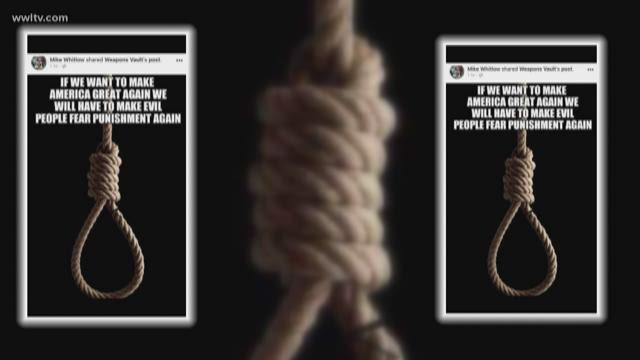 HAMMOND, La. - A school board member in Tangipahoa Parish is in hot water after sharing a photo of a noose on Facebook.

Tangipahoa Parish School Board member Mike Whitlow allegedly shared a picture of a noose on Facebook Monday with the message, “If we want to make America great again, we will have to make evil people fear punishment again.” The photo was originally posted on a Facebook page titled "Weapons Vault" in October 2017 and shared again on the same page Monday.

Whitlow later said he deleted the post and apologized, but not before other Facebook users took screenshots of it.

“I apologize to anyone who was offended by a post I recently shared. It has been deleted,” Whitlow later posted.

Tangipahoa Parish council member Louis Joseph sounded off about the shared post, sending a letter to the editor to actionnews17.com.

“I am extremely offended by his posts as we all know the history and meaning of the hangman’s noose,” Joseph wrote. “As a member of the school board, what message are you sending to the students, employees, and parents of our school system, let alone people that may be considering moving into our parish?”

I am deeply saddened by the misplaced reaction to a Facebook repost made yesterday,

February 18, 2017. As a resident and public servant of Tangipahoa Parish, I value public safety

and have been upset by recent violent attacks on innocent people in our great nation. Personally,

I believe that, as a country, we would be better served by more stringent sentences of imprisonment

for violent offenders. Yesterday, I came across an article on Facebook that advocated for such

stiffer sentences for violent offenses and simply shared the article on my personal Facebook page.

The article had no racial or discriminatory overtones whatsoever; however, after receiving

comments on the article regarding an attached photograph, I immediately removed the link and

apologized if the reposting offended anyone. For those that know me, I am confident that you will

attest that I am a man of faith and inclusion. For those that do not know me, I encourage you to

ask someone who does know me if you believe that the reposting causes you any concern. My

record shows that I have a good heart and work tirelessly to help those in need. In closing, I again

efforts to help those in my community.