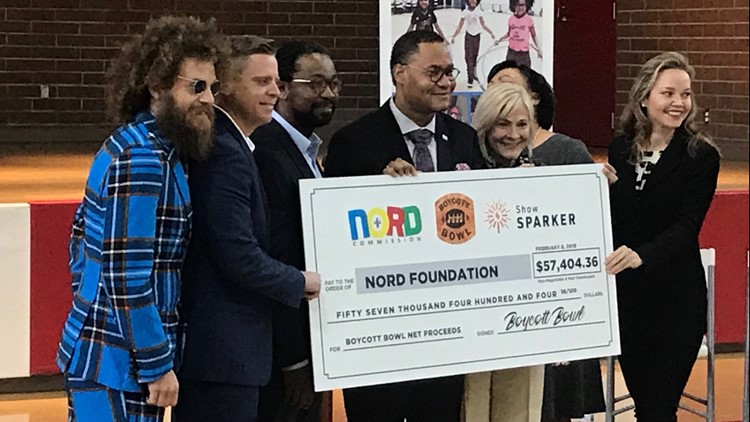 Thousands of fans donned their black and gold regalia and marched, danced, screamed and partied like they would have if the Saints had advanced to the Super Bowl. And in the process, they raised money for a local organization.

Friday, organizers for the Boycott Bowl turned over a check for $57,404.36 to the New Orleans Recreation Department Foundation.

“When we in our city feel like we’ve been knocked down, it’s the spirit of our people who uplift us and show, not only our city but also the people of the world, who we are and how resilient we are. To the Boycott Bowl team: Thank you,” Mayor Cantrell said.

The event was organized in two weeks and attendees were asked to make a $10 donation on showsparker.com. Aprés Lounge and Ernst Café joined to offer VIP opportunities and within five days the event was a sellout.

“As a former athlete at NORD's Harrell Playground in the 17th Ward, this makes me so excited to have helped raise this much money for the NORD Foundation," Boycott Bowl co-founder Walter Williams Jr. said.

"We stole the show from the biggest show in the entire world. These two weeks have made me cherish being a born, raised and current New Orleanian!,”Boycott Bowl co-founder Travis Laurendine said.

Moreno thanked event organizer Brandon Rizzuto and called on him to continue to build the "Boycott Bowl" into an annual event - as if New Orleans needed another excuse to throw a party.

Stay with Eyewitness News on WWL-TV and WWLTV.com for more updates o this story. Paul Murphy contributed to this report.