Cannizzaro is a vocal supporter of Cantrell’s opponent in this month’s mayoral election, Desiree Charbonnet. 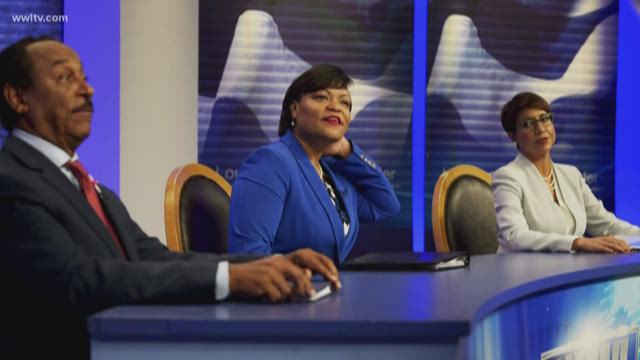 A criminal complaint has been filed against mayoral candidate LaToya Cantrell for her extensive use of a city credit card, and District Attorney Leon Cannizzaro’s office forwarded the complaint Thursday to Louisiana Attorney General Jeff Landry.

Cannizzaro is a vocal supporter of Cantrell’s opponent in this month’s mayoral election, Desiree Charbonnet.

Cantrell’s campaign said the move by the DA to announce the complaint and send it to the attorney general is entirely political.

“This is emblematic of a campaign that has the support of DA Cannizzaro and is using the district attorney’s office for their own political advantage,” said a statement from the Cantrell campaign. “One of Desiree Charbonnet’s advisers, Billy Shultz, an ex-convict, has handled Leon Cannizzaro’s political campaigns, and Cannizzaro has a history of endorsing Shultz’s political clients. We believe this is the reason and the only reason for their request. Another desperate ploy by a campaign that finished nine points behind on Election Day.”

Cannizzaro’s first assistant, Graymond Martin, sent a letter to Assistant Attorney General Brandon Fremin asking the AG’s office to assist in the investigation of Cantrell’s use of the taxpayer-funded credit card. The letter says Cannizzaro felt the need to pass along the investigation because he had endorsed Cantrell’s opponent in the mayor’s race.

The criminal complaint includes what Martin calls a “forensic audit report,” an analysis of hundreds of pages of credit card receipts. That report cites a city policy on credit card usage to allege that Cantrell charged taxpayers inappropriately for food, travel and other items, but that policy appears to apply only to executive branch employees, not to the separate legislative body, the City Council.

Cantrell’s campaign and city council office say her use of the credit card complied with a policy specifically governing the City Council and were vetted by the council’s own fiscal office.

Receipts show that Cantrell and her campaign has reimbursed the city for $8,951.69 in credit card charges since 2013, but most of it -- $4,433.22 – was reimbursed within days of her running for mayor, including some charges that dated back more than five years.

At the same time, the receipts show that the expenses never exceeded the $35,000 annual budget each councilmember receives to spend on official city business. Cantrell’s office said all of the $42,632.56 in unreimbursed expenses over five years detailed in the complaint were for legitimate city business, including travel and lodging for leadership conferences, policy research and an Aspen Fellowship Cantrell received, as well as for meals and refreshments associated with official meetings.

Cantrell charged at least 30 trips on the credit card since early 2013. That includes a trip to Milan, Italy, in March 2015; at least four trips to Aspen for her fellowship; three different trips to California; three to Washington, D.C.; and at least six separate trips to New York. In July 2017 she decided to reimburse more than $1,000 in expenses from one of those New York trips which had taken place in April 2016.

There is precedent for criminal charges against officials for use of a public credit card on personal expenses, even if they eventually reimbursed the agency for those expenses. Former New Orleans Public Belt Railroad Director Jim Bridger reimbursed the agency $5,667 spent on meals, entertainment and alcohol, but still pled guilty in 2011 to a count of misapplication of funds. Earlier this month, New Roads Mayor Robert Myer agreed to resign and pay back personal charges on his city credit card after pleading no contest to a count of malfeasance in office.

UPDATE, 8:00 p.m. Oct. 26, 2017: Adds details and number of trips charged to Cantrell's credit card. Also, the amount of unreimbursed expenses detailed in the complaint is $42,636.56. Less than $2,000 in additional charges that were eventually reimbursed by Cantrell or her campaign were counted twice in the complaint to point out that they did not include itemized receipts.